A down and out amateur boxer from Philadelphia's tough neighborhood gets the chance of a lifetime, while at the same time he finds love in the arms of a shy, reclusive girl who works in the local pet store.


Rocky Balboa - a "waste of life" - gets chosen for a shot at the heavyweight title to celebrate the start of America's bicentennial year. At the same time, his relationship with Adrian gives both of them a chance at some happiness and an opportunity to prove that they aren't losers. He may not win the title, but he can win some self-respect.

The trivia for the movie is fascinating to read.
posted by nubs (12 comments total) 2 users marked this as a favorite
FYI, Rocky and its four sequels are all on Amazon Prime (recently dropped from Netflix streaming).

I'm sure most people know this, but the reputation of the series is of diminishing returns at best, and Stallone's image doesn't suggest it. But the film was nominated for ten Academy Awards, and won three. Stallone did not get the Oscar for either his writing or acting nomination, though. His only predecessors in that august company were Charlie Chaplin and Orson Welles (however, Welles did receive an Oscar for co-writing Kane).

While it is certainly a good film, it's almost inconceivable in retrospect that it took the Oscar over any of "Taxi Driver", "Network", or even "All the President's Men" (or that Scorsese wasn't even nominated for direction).
posted by dhartung at 11:53 PM on August 30, 2014 [1 favorite]

While it is certainly a good film, it's almost inconceivable in retrospect that it took the Oscar over any of "Taxi Driver", "Network", or even "All the President's Men" (or that Scorsese wasn't even nominated for direction).

Look at the times, though. It was the '70s, but the Academy (or really anyone) didn't know what "the '70s" would mean. In addition, it was 1976. The Bicentennial. Watergate and Vietnam were still very much stuck in our collective psyche, and look at the really good films that came out that year: a psychotic cabbie, a dystopian near-future ruled by television of all things, ripping the band-aid off of Watergate, some damn hippie biopic, Nazi dentist... and Rocky, which is literally draped in red, white and blue.

Sure, looking back, it's the Forrest Gump of the '70s, but at the time? No, at the time, it was perfect.

It was interesting to me how some of it stands up so well, and how other parts of it don't hold up at all. There are some perfect choices here:

-Rocky's realization that he can't win. But maybe he can go the distance. It's a huge moment because it changes the expectations for the film and moves the goalposts; we're not going to see this bum become champ, just hope he can hang in there. To me, it's the key scene of the entire film and it was fascinating to read that the producers wanted to drop that scene from filming because they were running over schedule; Stallone had one take to do it.

-The structure of the film's final moments - Rocky has gone the distance, he's done what he sets out to do. The ring is chaos, he's calling for Adrian, everyone's talking over everyone else. It's clear it's a split decision, but past that? It's incredibly hard to hear the scorecards getting read. The first time I saw it I wasn't sure who had won the fight (and my wife saw it for the first time when I re-watched it Friday night, neither was she). The story committed to the idea that it didn't matter who won - because this was about something other than the heavyweight title, it was about Rocky and his victory condition.

-The film's opening fight does so much to establish everything about Rocky and his world, it's fascinating. And it's the moments of self-awareness that the film allows Rocky - the moments where you can see that despite his upbeat demeanor, he knows what people think of him, he knows what he is. The best moment (I think) is the one in the promoters office where he first tries to turn down the fight.

Part of the reason I think it is perfect for that year is that it was a hopeful film at a time when so much of cinema was dark and down - as Etrigan points out, the other films up for best picture are not uplifting (with the exception of the Guthrie film, which is largely fictional anyways - and it wouldn't have the broad appeal of Rocky). It's the bicentennial and here's a movie that speaks to it directly. The franchise goes on to incredibly more amounts of cheese with each installment (although I think there's some very interesting and deliberate parallels between Rocky and Rocky Balboa that are worth looking at, if I go through with my plan to look at a Rocky film a week).

And the pacing! It's 20 minutes before we hear Apollo's name, and almost the hour mark before the central premise is really on the rails - Rocky is going to fight Apollo. Amazing to me, and no way that a movie like this made today takes that long getting there.
posted by nubs at 8:03 AM on August 31, 2014 [4 favorites]

You're not kidding about the trivia - very interesting. Here's a bit I found surprising:

"Most of the scenes of Rocky jogging through Philadelphia were shot guerrilla-style, with no permits, no equipment and no extras. The shot were he runs past the moored boat for example; the crew were simply driving by the docks and director John G. Avildsen saw the boat and thought it would make a good visual, so he had Sylvester Stallone simply get out of the van and run along the quays whilst Avildsen himself filmed from the side door. A similar story concerns the famous shot of Rocky jogging through the food market. As he runs, the stall keepers and the people on the sidewalks can clearly be seen looking at him in bemusement. Whilst this works in the context of the film to suggest they're looking at Rocky, in reality, they had no idea why this man was running up and down the road being filmed from a van. During this scene, the famous shot where the stall-owner throws Rocky an orange was completely improvised by the stall owner-himself, who had no idea that a movie was being filmed and that he would be in it."

It is one of the best "he's lost but he's really winning" tropes executed on film.

Still a fine story, and not to be missed. I really like the dysfunctional relationship between the brother and sister, which added depth and made it not just a one-character movie. Also, the vulnerability in Stallone's performance is so against type - it's probably his finest performance.

A great movie, not a "oh it was good for the time" - it takes you on an emotional journey and delivers.

Let's not forget Burgess Meredith, that was a fantastic performance.

I don't recognize the poster shown at imbd, I think this is the iconic movie image that was used to promote the film at the time. I could be wrong.
posted by joseph conrad is fully awesome at 4:50 PM on September 1, 2014 [1 favorite]

Also: the music! "Gonna Fly Now" is *still* used by many runners on their personal playlists, and at racing events like marathons.

Also, the vulnerability in Stallone's performance is so against type - it's probably his finest performance.

Watching it, I was wondering what would've happened if studios had picked up on Stallone as a dramatic actor after Rocky. Maybe obscurity. Maybe a completely different career. He was able to bring some very subtle nuances and emotion to the role. Probably being the writer helped - he wrote that role for himself (or he wrote the role as himself), he inhabited it in a way that makes it hard to picture anyone else as Rocky.
posted by nubs at 9:50 AM on September 2, 2014

Watching it, I was wondering what would've happened if studios had picked up on Stallone as a dramatic actor after Rocky. Maybe obscurity. Maybe a completely different career.

Cop Land twenty years earlier and just as sucktastic?
posted by Etrigan at 9:59 AM on September 2, 2014

Maybe; like I said, I think part Stallone's performance as Rocky is the fact that he was the writer; he had a very clear picture in his mind of the role.
posted by nubs at 10:12 AM on September 2, 2014

C'mon, 73% fresh may not be a classic but it's not that. (I liked it, and I really enjoyed seeing him act.) I really think he might have had a career a bit like his co-star in that film Ray Liotta, if he'd not taken the admittedly delicious fruit of getting to direct himself again and again. Liotta himself had had his moment (Goodfellas/Field of Dreams) and has had quite a few solid roles in his career but is no longer a box-office draw. Perhaps Robert Patrick is a better model -- he's at least still in marquee fare occasionally. I suppose it's possible he could have competed with Keitel or even DeNiro for this role or that, though I don't think he was as likely to win major acting awards as either of them.

The thing is, though, the thing that grates on people is all about his persona, the seemingly iconic goombah. When you've played the top character in two film series spanning two decades, not to mention co-writing duties at least and directing most of one of them, you're about as successful as you ever can be in Hollywood. The thing that gets to connoisseurs about an actor like DeNiro or, say, Jack Nicholson, is squandering raw talent and walking through parts or succumbing to your tics, and to some extent Stallone never really got above that point, which is where some of the ridicule comes in. But not every decent actor needs to be brilliant or inventive. Personally, as much as I laugh at Stallone's persona along with the rest of the world, I try to give him his due as a creative force, especially since directing and writing are invisible to most moviegoers.
posted by dhartung at 10:20 AM on September 2, 2014 [1 favorite]

And I wonder too - if Rocky hadn't become a franchise; if Rambo hadn't become a franchise - maybe Stallone finds an entirely different career arc (or fades into obscurity, which is equally likely). Because the first film of both franchises has some differences in tone and feel from the rest. But Rocky goes on to some pretty big cheese, and Rambo becomes an action hero instead of a Vietnam vet with a lethal skill set and unaddressed trauma.
posted by nubs at 10:31 AM on September 2, 2014 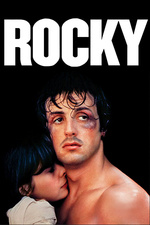