A band of mercenaries led by Captain Curry travel through the Congo across deadly terrain, battling rival armies, to rescue $25 million in uncut diamonds.


NYTimes: There is a lot of carnage on every side, in contexts that will probably infuriate anyone who scrutinizes movies for their politics. (There is none of the liberal idealization of people who, through lack of technology, kill more personally and less efficiently than we do; on the other hand, there were signs of sympathy with colonial aspirations and pacific longings for nonviolence.) The end of the film is a little stroke of plotting lunacy, which seems to reflect the movie's standoff ambiguity about what it thinks.

But the direction, by Jack Cardiff, who did "Sons and Lovers," is sporadically interesting. There are scenes—of a black, cigar-chomping engineer starting a train at dawn, of warfare, of the refugees at the mercy of the rebels—that don't look like anybody else's scenes. They might be at some point of comedy and menace where "Heart of Darkness" and "Scoop" converge.

Ferdy on films: Dark of the Sun is the sort of perfervid pulp classic that fulfils a cinephile’s fantasies about what such a film should look and sound like, evoking Sam Fuller and Delmer Daves in their capacity to boil complex themes down to dynamic examples, and say, in this unrestrained quality, things rather deeper and darker than a more prestigious, sober film could manage. The air of frantic innovation and hyperventilating cultural catch-up the late ’60s zeitgeist stoked in even the most conservative filmmakers left behind an epoch that’s still something of a wonderland of semicharted oddities like this.

Trailer
posted by MoonOrb 1 user marked this as a favorite
« Older Lady Dynamite: "We couldn't af...   |  The Flash: The Race of His Lif... Newer » 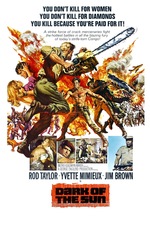