An alien lands and tells the people of Earth that they must live peacefully or be destroyed as a danger to other planets.


NYTimes (Bosley Crowther): Now, don't be alarmed, anybody but one of those things is here again. We mean one of those awesome contraptions that comes whirring in from outer space, humming and glowing with energy like a gigantic neon sign, to settle to earth in fearful splendor and disembark creatures of such powers that they thoroughly belittle us mortals and put our worldly accomplishments to shame. The medium of its transmission, is a film called "The Day the Earth Stood Still," which Twentieth Century-Fox delivered to the Mayfair yesterday.

Don't be alarmed, we confidently tell you, because, once this contraption is down and its pilots have emerged from its innards on the Ellipse in Washington, they turn out to be such decent fellows, so well-mannered and peacefully inclined, that you'd hardly expect them to split an infinitive, let alone an atom or a human head. Indeed, the more important of these creatures—the other is just a mere mechanical man—is in the nature of a super-emissary, sent to earth from one of the planets to counsel peace. And so benign is his disposition, even when he arranges things so the flow of all the world's electricity is stopped for an awesome half-hour, that he inspires one more with admiration than with bewilderment or fear.

Such benignity in a creature from whom menace is expected, obviously, might sit rather well in a picture which is set in a fairly literal frame. But in a fable of such absurd assumptions as this one amusingly presents, cold chills might be more appropriate than lukewarm philosophy. One expects more—or less—than a preachment on political morality from a man from Mars.

NYTimes (A.O. Scott): Obviously and unfashionably progressive, “The Day the Earth Stood Still” was the brainchild of the producer Julian Blaustein, whose first film was the 1950 brotherhood western “Broken Arrow.” As with “Broken Arrow,” which opened while “The Day the Earth Stood Still” was in pre-production (a few months into the Korean War), Blaustein had a purpose; the movie, he told the press, was an argument in favor of a “strong United Nations.” While the film’s director, Wise, was also politically liberal (years later, he described himself as a left-wing sympathizer who had not joined enough front groups to come under government scrutiny), his main contributions were stylistic. Wise had directed two low-key atmospheric chillers for the producer Val Lewton and before that served as Orson Welles’s editor. “The Day the Earth Stood Still” shows the influence of both: the movie’s relative naturalism is accentuated by adroit location work and, in some scenes, real radio reporters. The premise, of course, was Wellesian, and Wise recruited Welles’s brilliant composer Bernard Herrmann to provide a moody, theremin-enriched score.

Deep Focus Review: Winning a Golden Globe for the “Best Film Promoting International Understanding,” the film’s message offers a universal warning from the conscience of the Atomic Era. Indeed, the last scene is Klaatu’s speech to the top scientific minds assembled by the understanding Prof. Barnhardt (Sam Jaffe): “Your choice is simple: join us and live in peace, or pursue your present course and face obliteration. We shall be waiting for your answer. The decision rests with you.” Audiences are asked to contemplate their decisions and those of their governments, in a time where criticism of the establishment got you branded.

Klaatu himself represents a figure of hope and widespread progress, as his assumed name while hiding on Earth is John Carpenter, the initials indicating his Christlike message, and his surname linking to Jesus’ pre-savior profession. Messages such as these are easily found in Wise’s clear-cut science fiction parable, but that’s the point. The film doesn’t want audiences to read between the lines; rather it slaps you in the face and awaits your reaction.

Full Movie
posted by MoonOrb (7 comments total) 2 users marked this as a favorite
Introduced to this movie by my dad, many many moons ago. It's been one of my favorites ever since childhood.

I didn't realize "Broken Arrow" (another movie I'm fond of) was from the same producer, but now that you've pointed that out, I do see the similarities, and they're something we could use a good dose of today: don't fear the other just because he is other, all sides have something to contribute, and we really need to learn to work together.
posted by easily confused at 2:37 PM on June 7, 2016

I had heard the remake was beyond terrible. It is. I got about 20 minutes into it and it felt like I was watching the most mainstream sorry excuse for a television show I've ever seen.
posted by juiceCake at 6:32 AM on June 8, 2016

Yeah, skip the remake. To call it merely 'awful' is understating things.
posted by easily confused at 9:12 AM on June 9, 2016

I really like Rennie as Klaatu, he as an otherworldly quality that may not have fit in other pictures of the time but really works for him here. He's way beyond everybody but trying to help people, for example in the scene where he leaves a calling card by finishing Professor Einstein's Barnhardt's math problem for him.

Gort's also one of the great effects in cinema. He and Robby the Robot should have done a buddy film.
posted by fifteen schnitzengruben is my limit at 6:15 PM on June 11, 2016 [1 favorite]

Granted I haven't seen the original but I liked Keanu in the remake. He's such a stiff blank actor, that it worked really well for an uncaring and unfeeling alien.
posted by LizBoBiz at 6:59 AM on December 4, 2017 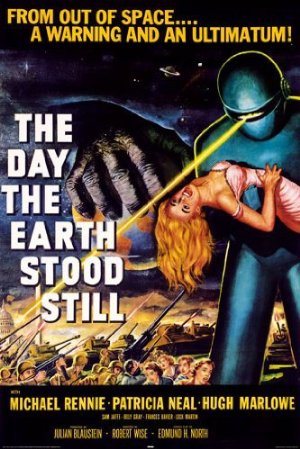