Cult Film Club: Lured by their dreams of fame and fortune, three ambitious young women enter the world of show business and discover how easy it is to sink into a celebrity nightmare of ego, alcohol and 'pills' - the beloved "dolls." A prim New Englander (Barbara Parkins) unexpectedly skyrockets from her job as secretary in a talent agency to a glamorous TV model. A determined singer (Patty Duke) finds that Hollywood success can also spell self-destruction. And a beautiful sex symbol (Sharon Tate) is torn between the money commands and the shame of feeling exploited. Based on Jacqueline Susann's phenomenal best-seller about the underside of Hollywood, this fascinating melodrama was once seen as a shocking behind-the-scenes look at how show business creates instant stars, destroys romances and changes personalities forever.


Roger Ebert's review: What we have here is a dirty soap opera. It is dirty because it intends to be, but it is a soap opera only by default. It tries to raise itself to the level of sophisticated pornography, but fails. And it is dirty, not because it has lots of sex in it, but because it firmly believes that sex is dirty.

Let's Talk 'Valley Of The Dolls': Barbs, Boobs And Revolting Kissers: This is definitely Gateway Classic Trash. It's that first friend who hands you two pills and tells you that what you REALLY need is just one good night's sleep; the next thing you know, you're doing European "art" films to support your loser boyfriend, and your bookshelf is stuffed with Themes And Variations On Flowers In The Attic.

Book vs. film: Valley of the Dolls: The film, like the book, is over-the-top in an entertaining way and I did enjoy it slightly better than the novel.
posted by maxsparber (5 comments total)
Pro-tip: it enhances the experience a ton if you think of Anne Welles (Parkins) as Allison MacKenzie and the flick as an alternative sequel to Peyton Place. Total trash, sure, but the Jennifer North storyline is poignant, and Tate gives a nice performance. I dig that it mostly focuses on women and their constraints.

I watched VotD for the first time last night, and I still have Thoughts to Process for later. (Drat that Russian Lit instructor who ruined me for not seeing symbolism in every work of literature.)

My first impression was that it could have done with having the trippy little montages cut out. I didn't feel like they fit with the tone of the rest of the movie, and they yanked me out of the narrative. Each time the movie settled back down to telling the story, it got more interesting.
posted by The Underpants Monster at 1:59 PM on September 3, 2014

Pro-tip: it enhances the experience a ton if you think of Anne Welles (Parkins) as Allison MacKenzie and the flick as an alternative sequel to Peyton Place

That's spooky, because that's what I always think when I watch VotD!

My best friend and I recently forced her 14 year old daughter to watch the movie with us. I'm thinking she didn't get it. But we were enraptured.

It's such a piece of shit, but it's so freaking GREAT. I love how Anne Wells wears Lyon down, only to discover that he was NEVER going to be who she thought he was.

Trivia: In the sequel, Shadow of the Dolls, Anne Wells's daughter is described as rich with 200 shares of AT&T stock. This was why she never had to worry!

And the yearly dividends from that number of shares would only have been about $1200 pre-crash.
posted by brujita at 7:59 PM on September 3, 2014

And it is dirty, not because it has lots of sex in it, but because it firmly believes that sex is dirty.

Interesting -- not to derail, but this is almost exactly the critique that I got of Lindsay Lohan's The Canyons, which seems in many ways a latter-day version of Valley.
posted by dhartung at 10:46 AM on September 4, 2014 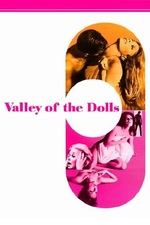