When Chief Justice Earl Warren was asked at the end of his career, “What was the most important case of your tenure?”, there were a lot of answers he could have given. After all, he had presided over some of the most important decisions in the court’s history — cases that dealt with segregation in schools, the right to an attorney, the right to remain silent, just to name a few. But his answer was a surprise: Baker v. Carr, a 1962 redistricting case.


On this episode of More Perfect, we talk about why this case was so important; important enough, in fact, that it pushed one Supreme Court justice to a nervous breakdown, brought a boiling feud to a head, put one justice in the hospital, and changed the course of the Supreme Court — and the nation — forever.

The key links: The key voices: The key cases: Music in this episode by Gyan Riley, Alex Overington, David Herman, Tobin Low and Jad Abumrad.
posted by Going To Maine (3 comments total) 1 user marked this as a favorite
This was such an interesting episode. I've even studied the case, but didn't know anything about the personal side of it. I'm really liking this series.
posted by General Malaise at 8:39 AM on June 16, 2016

This was a great episode. (I say that about pretty much every Radiolab episode, though, so I'm probably biased.) It is great to hear the human side of any Justice. That is where Radiolab excels, though, by bringing in the humanity. I'm looking forward to the rest of the series.

My sole criticism is that while I generally like Jad's tendency toward dissonance and creative use of repetitive sounds, I think the show would have been better with a few fewer Oyezs.

...would have been better with a few fewer Oyezs.

And in my opinion, a few fewer Jads. Here we have a really interesting commentary, especially from the female contributers, and all Jad can think to do is mock someone's name and make a dick joke (or is it a hot dog joke - it was hard to tell). Thanks for your thoughtful insight, Jad.
posted by ikahime at 4:19 PM on June 28, 2016 [1 favorite] 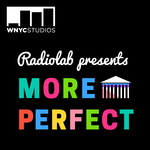