An Arkansas waitress and a housewife shoot a rapist and take off in a '66 Thunderbird.


Thelma & Louise is a 1991 American road film directed by Ridley Scott and written by Callie Khouri. It stars Geena Davis as Thelma and Susan Sarandon as Louise, two friends who embark on a road trip with disastrous consequences. The supporting cast include Harvey Keitel, Michael Madsen, and Brad Pitt, whose career was launched by the film.

The film became a critical and commercial success, receiving six Academy Award nominations and winning one for Best Original Screenplay for Khouri. Scott was nominated for Best Director, and both Sarandon and Davis were nominated for Best Actress. At its release the film stirred controversy, partly because it portrayed two heroines responding by arms to male violence. At the intersection of several genres, it is now considered a classic, influenced other films and artistic works, and became a cult of feminism. (wikipedia)

• Although the setting for the film is a fictional route between Arkansas and the Grand Canyon, the movie was filmed almost entirely in the states of California and Utah. The primary filming locations for the movie are rural areas around Bakersfield, California and Moab, Utah. The Grand Canyon scenes were actually filmed just south of Dead Horse Point State Park in Utah.

• The film was an overwhelming critical success. Metacritic lists a composite critical score of 88 out of 100. Rotten Tomatoes rates Thelma & Louise 83% "Fresh". Janet Maslin of The New York Times had only praise for the film in her review: "Mr. Scott's Thelma and Louise, with a sparkling screenplay by the first-time writer Callie Khouri, is a surprise on this and many other scores. It reveals the previously untapped talent of Mr. Scott (best known for majestically moody action films like Alien, Blade Runner and Black Rain) for exuberant comedy, and for vibrant American imagery, notwithstanding his English roots. It reimagines the buddy film with such freshness and vigor that the genre seems positively new. It discovers unexpected resources in both its stars, Susan Sarandon and Geena Davis, who are perfectly teamed as the spirited and original title characters."Roger Ebert also praised the film, but withheld a perfect score on the basis of "the last shot before the titles begin. It's a freeze frame that fades to white, which is fine, except it does so with unseemly haste... It's unsettling to get involved in a movie that takes 128 minutes to bring you to a payoff that the filmmakers seem to fear."

• The sequence where Darryl slips and falls over on the builder's supplies as he is leaving for work was unscripted, as actor Christopher McDonald genuinely lost his footing. Despite this he remained in character, yelling at the workmen as he got into the car and drove away. As he states on the DVD commentary, director Ridley Scott liked the result so much, he kept it in the film.

• The scene where Louise grabs Thelma's headphones off her and scares her wasn't planned. In the DVD's audio commentary, Geena Davis commented that she was supposed to get up when Susan Sarandon called her from the car, but she had the volume on her walkman up too high and didn't hear her cue so Susan came over to get her.

• In the scene where the tanker truck is shot and blown up, the reactions of Susan Sarandon and Geena Davis were supposed to be genuine. Rather than filming separate reaction shots, director Ridley Scott rigged the tanker to blow up during the take, in order to get authentic expressions of surprise from the two leads. Despite this, they were so astonished while watching it that they forgot to actually react, so Scott had to film their reactions again.

• Then struggling actor George Clooney auditioned five times for Ridley Scott for the part of J.D. that went to Brad Pitt.

• For the more raunchy sex scenes between Brad Pitt and Geena Davis, director Ridley Scott had assumed that a body double would be needed for Geena. Shortly after he'd begun auditioning prospective doubles, Davis learned of Scott's intentions and insisted that no doubles were needed in those steamy scenes.

• A total of five identical 1966 Thunderbird convertibles were used throughout the shoot: one 'star car', one camera car, one back-up car, and two stunt cars.

• It took producers so long to find someone for the role of Louise that Geena Davis had to sign a contract stating that the producers could cast her in either role if need be.

• In the original script, the characters of Thelma and Louise were supposed to be the same age. However, changes were made once the roles were cast due to Susan Sarandon being ten years older than Geena Davis. A conversation in which the two reminisce about going to high school together was among the removed dialogue.

• Goldie Hawn and Meryl Streep wanted to make a movie together and Thelma & Louise was one of the scripts they considered. Ultimately, they decided to star in Death Becomes Her (1992) instead.

• Jason Beghe improvised his scene where the State Trooper starts crying when Thelma's holding a gun on him, deciding it would make his character more memorable instead of merely and unemotionally complying with Thelma and Louise's demands.

• According to the DVD commentary, Susan Sarandon explained that when Louise gets out of the car to throw up, egg whites were used for the vomit, and she added that they are also used for love scenes in movies.

• Michelle Pfeiffer and Jodie Foster were originally chosen for the leads and accepted the roles, but preproduction took too long and both actresses had to drop out due to other commitments.

• 24 police cars and 3 helicopters were utilized for the film's climax.

• According to a magazine interview, screenwriter Callie Khouri based the character of Thelma on her friend, country singer Pam Tillis.

• Seeing the film inspired Tori Amos to write the song "Me and a Gun" about an assault she experienced at the age of 21.

• Scott watched Terrence Malick's Badlands (1973) for inspiration for the look of the film.

• Cher was also offered the role of Thelma, but turned it down.

• The final scene, where the two embrace each other before driving off a cliff, has become iconic. Numerous homages and parodies of the scene have appeared, including alternate movie endings, cartoon parodies, video game "Easter Eggs", and as a tragic ending to television series, music videos and commercials.

• With the light starting to fail and a public holiday looming, Ridley Scott had roughly 45 minutes to get the final scene just right.

According to the DVD commentary, Susan Sarandon explained that when Louise gets out of the car to throw up, egg whites were used for the vomit, and she added that they are also used for love scenes in movies.

I know this isn't really what Fanfare comments are for, but what? WHAT? I can think of a few things that egg whites could stand in for in a love scene, but what the hell kind of movies was Ms. Sarandon referring to here? Google turns up nothing other than the original trivia bit in IMDB as well as the belief that egg whites can improve fertility (another thing you ought to not be interested in for filming a love scene!)
posted by Mr.Encyclopedia at 1:57 PM on June 17, 2016 [3 favorites]

The soundtrack is one of the few cassettes I remember searching for as a teenager and buying and listening to over and over. I found it on Spotify again recently and I don't think I could watch the film again, because the soundtrack is so good.
posted by dorothyisunderwood at 11:33 AM on June 18, 2016 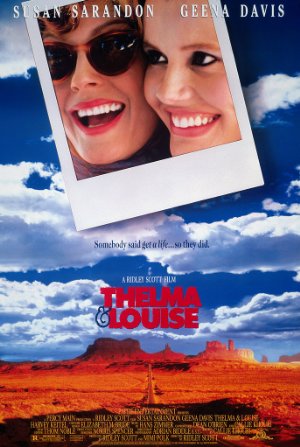