The second book of GRRM's A Song of Ice and Fire. The Seven Kingdoms enter a period of civil war as the War of the Five Kings begins.


Following the events of A Game of Thrones, Kings Joffrey, Stannis, and Renly (all nominally Baratheons) jockey for the Iron Throne while King Robb Stark of the North & Riverlands and King Balon Greyjoy of the Iron Islands declare independence. Meanwhile, Jon Snow and the Night's Watch go ranging beyond the Wall. Daenerys Targaryen takes her dragons east.

For the threads are dark and full of spoilers

This is a re-read of the books of the Song of Ice and Fire saga. Material from later books, the TV show, and ancillary materials are expected in the discussion, though the focus is on the book at hand. New readers and readers who have watched the show are welcome, but should expect that the discussion may bring up information from later in the series.

As this is a re-read, comments and questions as the reading progresses are encouraged; the book does not need to be finished before participating.

Some links that may be of use:

Tyrion cocked his head sideways. “Did you mean to answer your damned riddle, or only to make my head ache worse?”
Varys smiled. “Here, then. Power resides where men believe it resides. No more and no less.”
“So power is a mummer’s trick?”
“A shadow on the wall,” Varys murmured, “yet shadows can kill. And ofttimes a very small man can cast a very large shadow.”
Tyrion smiled. “Lord Varys, I am growing strangely fond of you. I may kill you yet, but I think I’d feel sad about it.”
“I will take that as high praise.”
-Tyrion and Varys discuss the nature of power

"So many vows...they make you swear and swear. Defend the king. Obey the king. Keep his secrets. Do his bidding. Your life for his. But obey your father. Love your sister. Protect the innocent. Defend the weak. Respect the gods. Obey the laws. It's too much. No matter what you do, you're forsaking one vow or the other.”
-Jaime Lannister on the nature of oaths

“A woman's life is nine parts mess to one part magic, you'll learn that soon enough...and the parts that look like magic turn out to be the messiest of all.”
-Cersei Lannister imparts some advice to Sansa Stark

“True knights protect the weak.”
He snorted. “There are no true knights, no more than there are gods. If you can’t protect yourself, die and get out of the way of those who can. Sharp steel and strong arms rule this world, don’t ever believe any different.”
Sansa backed away from him. “You’re awful.”
“I’m honest. It’s the world that’s awful.”
-Sansa Stark and the Hound

“Will you make a song for him?' the woman asked.
'He has a song,' the man replied. 'He is the prince that was promised, and his is the song of ice and fire.”
-Unknown people in a vision of Daenerys
posted by nubs (2 comments total) 1 user marked this as a favorite
First time I read this, I remember being completely at sea during the prologue - because Stannis is only ever mentioned and never seen in the first book, I barely understood who he was. Pile on the sorcery of Melisandre and the Lord of Light stuff and I kinda felt like I had walked into a different series.

But I also feel like this book is where things really get moving; not that the first book was without action, but it had to carry the world-building component and this book really feels like where things get moving with war, intrigue, dark magic, death, and the incredible siege of King's Landing.
posted by nubs at 8:39 AM on August 15, 2016

I've been reading this for months. I need more reading time and a son that doesn't insist I read his current favorite NOW. (Though I wouldn't trade that last for anything.) I agree, felt totally different than the first book.
posted by Seamus at 1:37 PM on August 20, 2016 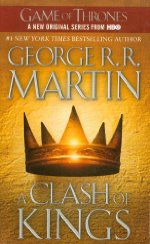