In which Kass, Tony and Trish battle it out for who can be the biggest ass while Woo looks on, Spencer struggles to stay alive and we the audience wonder where it all went wrong
posted by Brandon Blatcher (15 comments total)
Part of the joy of Survivor is the unexpectedness. You never quite know how the various personalities are going be portrayed or rub off on each other. When it's good, it's really good and when it's bad, you find yourself flipping through other channels and praying with each episode that something grande will happen.

This season, you're more apt to linger on another program and flip back every now and then to catch the highlights, because holy crap has this become a crappy and predictable season. Tony struts he's the asshole cop from hell, while doing a decent job of scheming; Kass furrows her brow and talks ridiculous smack, Trish lounges and the others just sort of follow. Except for Spencer, but he has to scrabble, since he's outside the core alliance.

Ugh, just hurry and let this season be over. It was smart of CBS not to schedule the finale against Game of Thrones, because it would have been Hodored like an enemy spy seeking Brandon Stark.
posted by Brandon Blatcher at 11:39 AM on May 15, 2014

I think Tony will win if he takes Kass to the end. Her flipping Trish off was uncalled for and low class. There is no one that I actually would like to see win this time.

I have watched every season of this show and this may be my last. I miss the days when they all looked like hell at the end.
posted by cairnoflore at 11:48 AM on May 15, 2014

Anybody know what was up with Tony voting for Trish? Did he just read during the TC that he's gotta keep Kass for the finale and lock in the win, or did something get edited out where he talks about switching his vote?
posted by dogwalker at 12:05 PM on May 15, 2014

If Spencer wins every immunity from here on out, he wins.

Tony has no chance of winning. He's more Russell Hantz than Boston Rob at this point. No one likes him.

I liked Kass shaking things up yesterday. I think the jury did, too. I think some of them have wanted to flip Kass off, too.

Tony's another great strategist for getting to the end of the game without any thought to actually winning the thing. Making a big play of keeping the super-secret immunity for next vote (even though he can't use it) virtually guarantees the others won't bother ganging up on him to take him out, too. But I guess it's not a cop's job to sway a jury, so he's got that down pat.
posted by GhostintheMachine at 1:05 PM on May 15, 2014

Tony's another great strategist for getting to the end of the game without any thought to actually winning the thing.

I think that describes Kass far more than it describes Tony (flipping somebody off whose vote you are going to need to win the game, really?), except perhaps for the great strategist part. I don't understand who it is exactly people think Tony has alienated. I think people are forgetting that much of his scheming, nastiness and snide remarks have been made to the camera, not other players. The only person he seems to have an issue getting along with is Kass, who doesn't get along with anybody. Even the people he blindsided he was cordial to up until the end, making it a clear strategic move rather than a personal one (and Woo has as much blood on his hands for those blindsides as Tony, really).

It Tony goes up against Kass and Woo, he wins in a landslide since everyone on the jury hates Kass and Woo has no resume to explain why he deserves to win beyond blindly following everything Tony told him to do. If Spencer can finagle his way into the Final 3 I think he wins a close battle with Tony and a shutout if he goes against Kass and Woo.
posted by The Gooch at 9:15 PM on May 15, 2014 [2 favorites]

Dogwalker, check out this secret scene. Basically, Tony says that Trish is so loyal, he can send her to the jury, and she'll still vote for him. Whereas if he sends Kass to the jury, she'll vote against him.

Brandon Blacher, I feel like we're watching totally different seasons! Sure, the characters have been behaving in consistent ways, but that's resulted in them bouncing off each other in very unpredictble ways. There were very few episodes this season where I successfully predicted who was going to get voted off.

Mostly it's the ugliest of the personalities for me, Tony and Kass in particular. They both come off as dislikable, though Tony has played a decent game and most likely to win.

Ugh, just hurry and let this season be over.

Really? Wow, my reaction has been almost totally the opposite - I've enjoyed this season a hell of late. Having no returning players makes it tremendously obvious what a huge advantage they enjoy, and has added to unpredictability (then again, One World had no returning players, and that frigging sucked). Also, I had read that they made an effort to recruit real fans of the show this time, and I feel that it really shows - there has only been one quitter (from that horrible Lindsey), and people are not so stupid in general (Jefra, Morgan and that model dude excluded).

I also really like Tony! I get the distinct impression we are only seeing one facet of his personality - he seems very well liked by his tribe and he and Spencer are super-pally on Twitter. I think Tony is smart enough to keep a lot of his thoughts to the camera, and his child-like enthusiasm for being on Survivor is a nice contrast to all the contestants they get who don't seem to realise they are even on the show.

Further, he's played better, and harder, than anyone else - even with his wackiness included. He was the only one bothered looking for idols; he's been very competitive in challenges (I suspect he might have thrown that puzzle one this week?); and he's a very diverse alliance together - while remaining relatively well liked. Comparisons to Russel - actively misanthropic and absolutely despised by everyone he plays with - seem unfair to me.

Spencer lost me through some of his passive play, but his chauvinism was the deal breaker - typical young white male economics student (hormones comment, catfight comment, yuck). Tasha was better than him, a very dangerous player, in every sense,, but he seems very popular on the net.

Kass is so gloriously, hilariously clueless. She has no idea, at all, and the fact she thinks that she is so clever - when she is actually infantile, wholly transparent, and petty - is very funny. If she makes it to final two or three or whatever (which I'm sure she will), final council is gonna be hilarious as the jury rips her a new one and I predict she will fail to get asingle vote, regardless of who she's with.

Ive enjoyed this season a lot, and I think the challenges have been ace, though a few more swimming challenges would have been good.
posted by smoke at 3:20 PM on May 16, 2014

I don't think Tony purposely threw that challenge. He never would have put himself so far ahead if that was the case, unless he was trying to directly hand it to someone specifically, which seems unlikely.

I believe he just doesn't know slide puzzles that well. That panicked approach totally looks like what someone unfamiliar with them would do.
posted by dogwalker at 4:06 PM on May 16, 2014 [1 favorite]

I don't like Tony, but he'll win against anyone but Spencer. Tony has played an amazing game. He's completely ruthless but able to lie so skilfully that people keep going along with him.
Spencer could win on the likeability factor. The others don't stand a chance.
posted by SLC Mom at 6:43 PM on May 16, 2014

i really dislike tony, but i do think he's played the best game - sometimes the best game is a bully game, especially the kind of bully who pretends to be a close friend. woo might win over him if the jury is feeling bitter and wants to punish the one directly in charge. kass doesn't have a chance in hell. she fancies herself the ringmaster, when all she's done is flipped around a bunch to make it look like she was doing something. spencer will probably win over anyone - i think tasha's awesomeness rubbed off on him, and since she's no longer around to root for, he gets the benefit. i continue to be sad that tasha won't be winning. she's my favorite survivor contestant in a long time.

as to this week's vote, i personally think tony voted for trish because he realized the votes were going that way and didn't want the jury to think he was on the outs. it worked too, since back in ponderosa the jury thinks that tony orchestrated the trish vote out.
posted by nadawi at 9:33 PM on May 17, 2014

Smoke, I agree with you on a bunch of counts. But just to defend a few players-- in their exit interviews, Jefra and Jeremiah both come off a little better than they did on the show. Neither of them seems like a potential Kim Spradlin, but they both sound like reasonably smart people who never really found their stride in the game, and ended up getting inconsequential edits.

I'm extremely sorry over what I said, and not just sorry because people took offense to it. I was sorry in the moment as well, immediately regretting my choice of words during that confessional. I said it in a fit of immature (and, ironically, highly emotional) anger and didn't think it through at all. I saw Kass's move as irrational and emotion-driven and wanted to encapsulate that in a witty way, thinking referring to the hormone most associated with emotion would be funny. Obviously, it wasn't. It was unacceptable.

In no way do I think women are more prone to that sort of behavior than are men. I grew up with three sisters and wouldn't have survived childhood with a myopic view like that! I fully understand that what I said could suggest a 'writing off' of women's decision-making, and want to assure you that although it may have seemed otherwise, I was going for Kass-hate. Not misogyny. That said, there's little to do about it now other than sincerely apologize to everyone upset by the comment.

I think Spencer was probably a little immature when he arrived on the show, but that felt to me like a heartfelt apology from somebody who has done some very rapid growing up.
posted by yankeefog at 7:26 AM on May 19, 2014 [2 favorites] 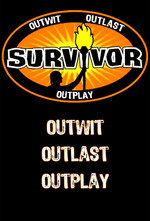