It appears lupine theriomorphs are responsible for the latest string of murders in Chicago and as usual the regular authorities are intentionally clueless. Enter Special Investigations police lieutenant Karin Murphy and Chicago's only Wizard for Hire Harry Dresden.


Marcone henchman Spike is found eviscerated in the future home of the Marcone night club the Varsity (being rebuilt in a new location after Harry burned down it's previous incarnation). Murphy calls Dresden in as it appears to be the work of a werewolf. Also on the case are four agents from the FBI who aren't happy to see Murphy or her "charlatan" consultant. Agent Benn of the FBI gets into a tussle with Murphy and attempts to shoot her. The incident is brushed under the rug as a misfire to prevent an investigation that would involve Murphy's superiors and likely her demotion.

Harry uses blood at the scene to magically track down a group of college werewolves and their leader Tera West. The tracking wasn't sanctioned by Murphy and it starts the tension re-building on the trust issues in their relationship.

Back at home Harry, not having encountered werewolves before, consults with his talking skull "Bob" for more information. Bob lets him know that there are actually several different types of shapeshifters loosely collected under the umbrella term werewolf and each is more dangerous than the last.

Dresden's first clue, provided by another FBI Agent, leads him to a biker gang that appear to be what Bob calls lycanthropes. Harry being his charming self gets on their bad side and now they are out for his blood.

Marcone has heard that Dresden is back working for Murphy and attempts to buy him off the case by hiring him as a security consultant on an exclusive basis for the next couple of weeks. Harry refuses but Marcone gives him another potential suspect, Harley Finn. Harry's investigation into Finn has him questioning the Demon Chaunzaggoroth. "Chauncy" informs Harry that Finn is a werewolf of the most dangerous type, a loup-garou, in exchange for one of Harry's true names.

But before he can get deep into investigating Finn Murphy arrests Harry. He is broken out of custody by Tera West who solicits his help to control her boyfriend Finn. Tera appears to be yet another type of werewolf. Shot escaping and unable to turn to his regular helpers Harry involves Susan; getting a ride in exchange for an exclusive on the werewolf murders.

The police manage to arrest and lockup Harley Finn for the murder of Spike ignoring Harry's warnings that the jail won't hold him once he shifts to loup-garou form. However Murphy has read his report and as a cautionary measure has cast silver bullets for her .22 target rifle. Harry rushes to the police station in an attempt to advert disaster but he is too late, Finn is already changing. Together Dresden and Murphy manage to drive Finn off as he rampages in the police holding facility but not before Finn kills practically everyone he encounters and lays waste to the facility.

After a talk with himself Harry sets off with Tera and Susan to find Marcone. But he gets waylaid and overpowered by the biker gang who are still out for his blood. Harry wakes up in their hideout and gets into a three way battle between the biker gang; the FBI, who are revealed to be hexanwulfen werewolves and behind the murders they are investigating; and Harry plus Tera and her group of werewolves.

Harry figures Marcone is the chessmaster in all this and heads to his estate with his team to confront him. There they are captured along with Murphy and used to bait a trap designed to ensnare Finn. Murphy and Harry along with their team escape their impromptu prison with the assistance of Marcone who has been double crosses by the hexanwulfs. Murphy and Harry with an assist from Tera and the college werewolves take out the hexenwulfs and the loop-garou.

In the fall out it turns out that Susan has video of the final fight that goes mysteriously missing after a couple days but not before plenty of people see broadcasts of Murphy taking out a Monster. This gets her a little credit with elected officials and shorts an internal affairs investigation leading to an actual engraved name plaque for her office door.

Looking back over the past year Harry starts to suspect that his recent string of interesting events might not be unrelated.
posted by Mitheral (7 comments total) 1 user marked this as a favorite
Do you mind if we add some more specific tags? A few that will link up with the first book that I posted here awhile back? harrydresden, jimbutcher
posted by Fizz at 8:21 AM on October 1, 2016

Interesting that this synopses completely omits any mention of Kim Delaney, who Dresdin' basically gets killed die to his arrogant and patronizing attitude. Of course it's expected that Harry, being a karma Houdini suffers no consequences, but the complete erasure is puzzling.
posted by happyroach at 11:09 AM on October 2, 2016

It also doesn't mention Billy and Georgia. Or Carmichael. And it barely touches on Susan. Most of whom have significant parts in the ongoing arc and had lots of words dedicated to them in the book.

Some other things I cut or left out that I considered including or expanding on:
The differences between hexenwulf, werewolves, lycathropes and loup-garous.
A bunch of additional material on Marcone and specifically how the NorthWest Corridor intersected with his plans.
Any mention of the NorthWest Corridor as a motivation for Finn.
The weird relationship between Benn and Denton.
I glossed over why Murphy arrested him.
I left out mention of the potions.
And I left out any mention of his family.

I discovered while composing this post that this is a new kind of writing for me and even as I was doing it I wasn't really happy with the result. I struggled quite a bit deciding what the key events were to have a decent synopsis without ending up with a coles notes version of the book. What I thought was going to be quick write up of a novel took me the better part of a day off and on. So I appreciate any thoughts like these on how the write up could have been better.

No doubt Harry is quite the misogynist. He's constantly trying to "protect" women who are quite capable of protecting themselves. Often that protection takes the form of keeping them in the dark. Especially in the earlier books you see this all the time during his interactions with Murphy. I don't want to spoil the later books (those who want to remain 100% in the dark skip the next part though it is pretty mild IMO) but for those who have read them compare his interactions with Murphy or Susan or Elaine or his other female companion to either of his regular male companions.

Butcher also seems to think everything about his protagonist needs to be huge. Harry himself is a giant of a man at 6'9" (99.9 percentile in the US). He speculates his cat is part bobcat because it is so large. His eventual dog is a monster described as a cross between a mammoth and a dogasaurus.

Harry is limited by the rules of the White Council in what he can tell non-initiates. Those rules forbid even discussion of the kinds of things the circles Kim asks him about are meant to contain. Kim also says “I’m not using this for anything serious, I promise. I’m not trying any summoning or binding. It’s an academic interest only. Something that’s been bothering me for a while.” I don't think Harry believed her but she is not without agency in what happened to her. She could have come clean on what she was trying to do. Heck if she had Harry would have stepped in and possibly could have repaired Finn's circles. Harry gives Kim excellent advice to forget about the circles and walk away from whatever she is investigating.

“You’re sitting on a tiger cage, Kim.” I [Harry] thumped a finger on the paper for emphasis. “And you wouldn’t need it if you weren’t planning on trying to stick a tiger in there.”
Her eyes glittered, and she lifted her chin. “You don’t think I’m strong enough.”
“Your strength’s got nothing to do with it,” I said. “You don’t have the training. You don’t have the knowledge. I wouldn’t expect a kid in grade school to be able to sit down and figure out college calculus. And I don’t expect it of you, either.” I leaned forward. “You don’t know enough yet to be toying with this sort of thing, Kim. And even if you did, even if you did manage to become a full-fledged wizard, I’d still tell you not to do it. You mess this up and you could get a lot of people hurt.”
“If I was planning to do that, it’s my business, Harry.” Her eyes were bright with anger. “You don’t have the right to choose for me.”

Harry is really tied by being the member of a secret society and having to follow their rules. A society that thinks nothing of sending a guy out with a magic neutering sword to lop the heads off of members and non-members who break their rules. Re-reading the passage I'm not sure Harry had any other choices in his interaction with Kim with the possible exception of stalking her to find out what she was really up to.

Yeah, this is still in Butcher's early days when he was throwing stuff at the wall to see what hit. It's not until later that the series starts to get bogged down under the cross purposes of Rules and Always Be Escalating. I like that this was pretty much a noir story - corrupt cops, gangster grabs power. It would have been nice if Butcher could have restrained himself to this level for a bit longer.

I look at the Dresden Files the same way I look at Repairman Jack, where the best part of it is the small stories, the personal moments. Harry is an engaging character (until he turns Action Hero later on) - he's a sad sack trying to do his best in an unfair world. I mean, he's a dude that loves pop culture who can't watch TV without it exploding. Sad! Of course, he somehow keeps up with pop culture in later books... which in forum comments Butcher says that he hangs out in malls and watches videos at Suncoast Videos and uh Billy prints out all the dank memes for him...

That said, I think this book in the series was the last time I actually read any werewolf stuff. I can't stand Billy or the rest of the Alphas and just skip over their chapters in future books.
posted by robocop is bleeding at 6:15 PM on October 2, 2016

Personally, is day one of the biggest problems of the series is is trying to give a noir feel, in a world that's basically got a Dungeons & Dragons style alignment system. So the Council may be hidebound and ruthless, but it's necessary to be stop, because in the magical world you're either Good (tm) or Evil (tm). No takebacks if you go evil.

Also, I'd say the misogyny in the stories is not an artifact of Harry, but of the author. The roles of women in the Dresdinverse is highly constrained, stock as Damsel to Rescue, Love Interest, and Femme Fatale. Which leads to a lot of unfortunate results for women characters later on.

Anyway, I'm sorry Mitheral if I came off as touchy and extra critical in this. The synopsis was much more detailed than I usually see here, and I didn't know it was your first.
posted by happyroach at 1:31 PM on October 3, 2016 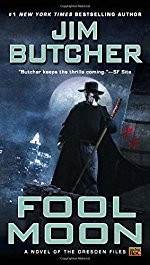