Bobby and Shelly receive some disappointing news, Ben and Josie make a deal, Leland returns to work and the One Armed Man finally speaks.


Scheduling: new episodes posted every Tuesday and Thursday. Both re-watchers and new viewers are welcome.

Watching: available for streaming on Netflix, Amazon Prime, and for free on Hulu and CBS's site.

Previous Episode Threads:
Season One: Pilot, Traces to Nowhere, Zen, or the Skill to Catch a Killer, Rest in Pain, The One-armed Man, Cooper's Dreams, Realization Time, The Last Evening
Season Two: May the Giant Be With You, Coma, The Man Behind the Glass, Laura's Secret Diary, The Orchid's Curse

Bonus Stuff: Shortly after Twin Peaks was shuttered ABC released its own attempt at surreal long-form TV drama with Wild Palms. Featured previously on the Blue
posted by codacorolla (3 comments total) 2 users marked this as a favorite
I love Lynch as Gordon Cole so, so much. He's doing that thing that's in so much of Lynch's stuff where the character has an extraordinarily difficult time communicating, but does it here in such a goofy, fun, lovable way.
posted by Timmoy Daen at 7:40 AM on September 12, 2014 [1 favorite]

The beginning of the end of the better storyline -- Laura Palmer's death -- and the start of the worse one -- Windom Earl's chess game, which will be treated very seriously for a very long time, and then literally abandoned when it no longer works for the plot.

At this moment, with Mike's confession, all the pieces are in place to solve the crime. On rewatch, the show has made the killer that Bob inhabits explicit numerous times, even if the performer did not know that he or she was the murderer. The show always knew.

The actual winding up of this case is unexpectedly protracted, probably because Lynch feared people would lose interest when the killer was revealed. He was right, although I think it is mostly the poor quality of the storylines set in place in season two, and not because I was only interested in the Laura Palmer storyline. Unfortunately, so many of the stories established in season one fizzle now, and the new stories are such bunk, that the show loses steam quickly. Josie deserves much better than she's getting, and the fact that Ben is still pursuing the Ghostwood project and trying to take overt the mill just seems endless. When it ends, though, we will be left with a Ben that is utterly lost, and a Jerry that just sort of fades into the background.

This is also the end of the Audrey as girl detective narrative, which was a great one, and the start of Audrey as heir to the Great Northern, which is a mess.

At least the Leo narrative has a nice twist. It's satisfying to discover that Bobby and Shelley are such incompetent bad guys. I find Bobby's confession to Jacoby totally credible -- that it was Laura who forced him into becoming a drug dealer, because she wanted the drugs. It would help explain why the money was in Laura's safe deposit box, and Laura seems like she could set up a connection with Leo and Jacques Renault, as she has a relationship with them outside of her relationship with Bobby, had worked at One eyed Jack's, and knows Leo through the diner. I feel like Bobby and Shelley primarily connected because both were in abusive relationships with damaged people and were looking to get out, although this is never explicitly spelled out.
posted by maxsparber at 11:19 AM on September 12, 2014 [4 favorites]

Seconding the love for Gordon. One of my favorite things about the show is how it paints the FBI as a collection of more-or-less benevolent eccentrics, and Gordon is the top of that heap.

Other great performances in this episode: Ray Wise is KILLING IT as the revitalized Leland; after watching him flail in various stages of grief for most of the series, seeing him apparently whole and sharper than ever but still slightly..."off" is unexpectedly terrifying. Similarly, Al Strobel's transformation into MIKE is some masterful work, and the only non-acting trickery involved is a little bit of growl-reverb on his voice.

The way MIKE repeats his speech from the dream makes me wonder if the inhabiting spirits are some kind of ghostly automata, wisps of consciousness that perform the same actions over and over again. BOB abuses and kills endlessly, because it's what he is "programmed" to do.

maxsparber, I hadn't quite made the connection wrt Bobby and Shelly's relationship, but it makes a lot of sense now that I've read the Secret Diary and saw how Laura actually treated Bobby.
posted by Strange Interlude at 8:39 AM on September 13, 2014 [1 favorite] 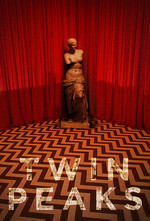