When the Separatists unleash a devastating secret weapon on Republic forces, Jedi Master Plo Koon is sent to discover the latest threat in the Clone Wars and soon finds himself and others in a powerless escape pod drifting in the space at the mercy of General Grievous' forces.

"Rising Maleovence,' is the sixth episode of The Clone Wars in chronological order, but was aired as the second episode of the first season. For more information on it, check out its episode guide here!

An attack by a devastating new Separatist weapon -- the powerful starship Malevolence -- leaves Jedi Master Plo Koon and his clone troopers struggling to survive until Anakin and Ahsoka can find them.

Trivia! Next time on The Clone Wars!

The next episode in the chronological viewing order is Season 1's episode two, " Shadow of Malevolence"!
posted by Atreides (1 comment total)
The suspense in this one was a bit scary for my kids. They decided it was ok though, because "The Jedi always win!" I liked meeting Ahsoka Thano. Although what's the deal with her skimpy outfit?
posted by medusa at 6:37 PM on November 21, 2020 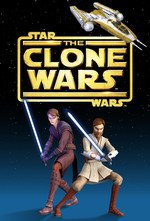