After snarky youth Kevin McCallister (Macaulay Culkin) loses track of his father at the airport, he mistakenly gets on a plane headed for New York City -- while the rest of the McCallisters fly to Florida. Now alone in the Big Apple, Kevin cons his way into a room at the Plaza Hotel and begins his usual antics. But when Kevin discovers that the Sticky Bandits (Joe Pesci, Daniel Stern) are on the loose, he struggles to stop them from robbing an elderly man's toy store just before Christmas.
posted by the man of twists and turns (8 comments total)
I could watch just the scene where Kevin hucks bricks at Marv over and over and over again.

I saw this one when I was younger, and remember strong feelings about how this time Kevin was far more intentional about staying lost and enjoying it, versus the first movie.

It also was part of my education into the disappointment of "what if the first movie but too much" comedy sequels.
posted by traveler_ at 11:21 PM on December 6, 2016 [1 favorite]

Watched this while putting ornaments on the tree, took time to pause and yell at Donald Trump when he showed up. GTFO of my movie, Donald.
posted by miratime at 6:04 AM on December 7, 2016 [6 favorites]

He also marred my enjoyment of Zoolander earlier this fall. Bah.

I remember seeing this movie in the theaters! Does that make me old?
posted by chainsofreedom at 8:43 AM on December 7, 2016 [1 favorite]

This movie did a lot to shape what little positive perception I have of NYC.
posted by kevinbelt at 3:56 PM on December 9, 2016 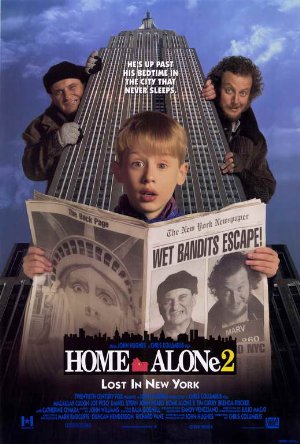