Boy (James Rolleston) is an 11-year old growing up on the east coast of New Zealand in 1984 who loves Michael Jackson, helps take care of his large family, has a crush on Chardonnay (RickyLee Waipuka-Russell), hangs out with his friends, and fantasizes about when his Alamein, his father (Taika Waititi) will get home from prison. Alamein looms large in Boy’s imagination as a heroic figure, and his surprise return forces Boy to square his imaginings with a less-appetizing reality.
posted by Going To Maine (3 comments total) 2 users marked this as a favorite
What a great movie! That’s all. When watching Hunt For The Wilderpeople I figured that Waititi had copped a bit from Wes Anderson, but after seeing the similar sequences in Boy I’ve realized it’s all him.

Such a funny, charming movie, and threaded through with so much sadness underneath.
posted by Going To Maine at 11:07 PM on February 16, 2017

Of course, I've watched Boy a couple of times, and still enjoy it for its 'growing up in enzed/godzone' narrative. The east coast of the north island is in a way, separated from the rest of the country, like the west cost of the south island is.

I found the most interesting character was Rocky, who seemed to know things his age shouldn't have allowed.

I'm looking forward to the next Thor which should be Taika's Big Break, with plenty of maori humour.
posted by arzakh at 3:21 AM on February 17, 2017

I loved this movie! And the hakka to Thriller was just fantastic at the end.
posted by hurdy gurdy girl at 10:22 PM on February 18, 2017 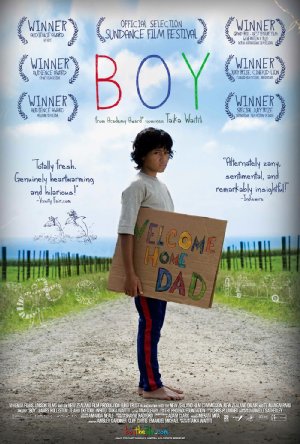