The whole season they keep going back and forth with Jim being saved by the dome and repeatedly forgiven and finally setting things right. For this? A gruesome hammering of the science teacher? They don't even have the guts to kill him at the end, which worries me that a renewed show would try to give him yet another redemption arc.

Joe thinks maybe if he had gone to the parade his sister would still be alive, but then he wouldn't have met his three week girlfriend that he's only broken up with once. Sorry Angie, you lose again.
posted by Gary at 11:53 PM on September 22, 2014 [3 favorites]

I feel like everyone responsible for writing, producing, and airing this stupid show should be forced to subsist on tree bark for every hour that has aired.

Stupid:
Julia assuming the call for help meant intruder vs medical assistance.
Walkies with working batteries after last week's episode.
Talking to the fucking dome.
The fucking dome.
Killing someone because they're bleeding out. Give it 5 mins, she'll be dead anyway. You're a damn science teacher and you can't figure that out? One bag of saline wouldn't have saved her.
Dome contractions!
Shouting at your mom that you're not going to leave then meekly obeying when Barbie ‎tells you to leave.
Female death count vs male death count.
Boxing up supplies to take into a random tunnel.
Random tunnel (forgiven if the crystals were a shoutout to the original Land of the Lost).
Crying over a dead mom while completely ignoring the one still alive.
Kid who loses his dad not giving two fucks five minutes later.
The electrocution
‎QUICKLY!! Goddamnit. Does anyone take a fucking English class anymore? QUICKLY. You killed her quickly. GAHHH!
‎OMFG! An hour ago you couldn't see into the sinkhole. Now you're casually talking down to people in the sinkhole?! Fuuuuuuuuuuk!!!!
How many times can you cock a gun without uncocking it, Jr? ‎
The dome isn't asking anything. The dome has said NOTHING. It doesn't talk.
Good thing none of the residents or the injured were in a wheelchair.
So, no house-to-house, then? If you weren't in one of three places, your loss?
Fuck the dome. ‎
‎
I want these hours of my life back; I could have done something meaningful and productive, like coke or meth. ‎
posted by Ik ben afgesneden at 1:59 AM on September 23, 2014 [11 favorites]

I can't even muster up the energy to comment.

Except I love how last episode's big plot point, returning the egg, was just mentioned in passing.
posted by TWinbrook8 at 5:06 AM on September 23, 2014 [2 favorites]

I think there were two unintentionally funny parts:

- when Big Jim is all "oh honey I love you" *wife dies* *looks to see needle in doctor's hand* - sudden dagger-eyes!

His wife brought out the good in him but she dead now.

(Also: what the hell, doc - hide the incriminating evidence, don't just stand there like a doe in the headlights with tears streaming down your face.)
posted by joseph conrad is fully awesome at 8:05 AM on September 23, 2014 [3 favorites]

They did finally give the town more than 15 extras.

The arbitrary electrocution yes; the painted-on lightning effects; the kid was hysterical one moment and then entirely normal the next.

The reveal of HER LAST PAINTING.

The crater: last week it was bottomless, this week it's about ten feet deep.

The DomeKidz see a butterfly and a glow, but NOBODY -- not them, not Barbie -- bothers to ACTUALLY TAKE A LOOK AROUND THAT CORNER before sending THE ENTIRE TOWN down a dead end.

Oh, and for Nelson: the shoehorned-in tablet product placement. Because oh yeah mysterious pit MAYBE IT HAS WIFI.
posted by We had a deal, Kyle at 8:12 AM on September 23, 2014 [3 favorites]

So does "Dome Contractions" mean the dome was pregnant?

Poor farmer guy, the only times we see him on the show are:
-Pig farm is ruined by flu
-Having to sell his belongings because of the failure of his farm due to the pig flu
-Wife dies due to the cold snap
-Caught under piece of farm equipment and then electrocuted to death in front of his son
posted by LizBoBiz at 8:56 AM on September 23, 2014 [6 favorites]

LizBoBiz, now that kinda makes sense since they're leaving the dome through an opening that's below ground. *Scrubs brain.* (Ok, that is a bit funny. Stupid-funny.)

The dome gave birth to stupid humans. I hate this show more now? Is that possible?

I made a vow to never, ever buy any more tablets, MS or not, just because of the terrible product placement. I'm surprised a car only showed up once. Was it the product placement car? I refuse to use the name.
posted by Ik ben afgesneden at 9:16 AM on September 23, 2014 [1 favorite]

"The time between its contractions is getting shorter."

Terrible, terrible dialogue: "I got to see my sweet, sweet boy become a man."

Also: I liked the DomeKidz trying to convince us "it's another tunnel", "but it's DIFFERENT to the one under the school." Because no: it's clearly the same set, just with some glowing purple crystals glued onto it.
posted by We had a deal, Kyle at 11:19 AM on September 23, 2014 [1 favorite]

Junior was running full sprint out of the woods and wounded Big Jim is only 10 seconds behind him. So their confrontation either happened almost immediately beside the sinkhole, or Junior got lost and took a huge detour.

Actually, that does make sense. Junior forgot what he was supposed to be doing and got lost. Never mind.
posted by Gary at 1:31 PM on September 23, 2014

So, that was... something that happened. I don't know whether it's Stockholm syndrome or just wishful thinking, but did anyone else think the writers on this show showed signs of becoming self-aware during this run? The kid's dad who was the human embodiment of bad luck and Julia and Barbie (Barbia?) acting super-nonchalant after he died, painfully clunky dialogue, obvious metaphors... it's almost like they're trying to defy the hatewatchers now. Should it come back, I'll be very disappointed if Big Jim doesn't lose a hand and replace it with his murderin' hammer.

Oh god, please let this be the end of our suffering. And let us say a prayer of relief for Dean Norris, Karla Crome, Sherry Stringfield and Dale Raoul, whose presumed deaths mean their agents managed to get them out from contract from the potential disaster of a renewal. Dean Norris really did go out well, chewing the scenery with his murderous glares. Loved the bit about setting the kids on fire; who among us has not wanted to immolate the Scooby Doo gang?

We had a deal, Kyle!: I'm glad you picked up on the one last tablet product placement. There's been a telling trend these past few episodes, no brand name mention. I think maybe even Microsoft managed to flee the sinking ship dome.

I like how Nori basically serves as the Greek Chorus for this episode, saying the things we, the audience, are feeling.

Whoever you are controlling this can you just talk to us and tell us what’s going on!
Nothing but a giant killer suckhole!

Props to the show writers for making the Athiest Scientist Teacher also be the Angel of Death, and yet somehow sympathetic. And to Big "Big" Jim for running around like a madman to find the saline, then bringing back one bag of saline as if that would make a difference. And this, for a show that just last week had the whole town scrounging for lima beans to do some blood transfusion hotswapping.

Special mention to Joe and Nori for deciding one fucking butterfly was enough evidence to convince the whole town to risk certain death in shaking tunnels to an unseen exit. Double props for not mentioning the gaping hole of death in the otherwise perfectly flat floors, in case someone wanted to bring along a couple of goddamn 2x4s to make a bridge.

At least we know how big Chester's Mill is. 75 people, or "our remaining budget for extras". Most of them looked like production assistants or the cousin of Bob, the gaffer.

A perverse part of me hopes they get renewed. And the next season is basically Blue Lagoon: the Dome with nothing but Junior and Julia left. Julia instructs Junior in the sacred mysteries of her goddess redhead sex magic, the two of them compelled by the dome to repopulate the town. Instead of babies, Julia lays eggs like a butterfly. The caterpillar larva that hatch all look like Dean Norris.
posted by Nelson at 8:28 PM on September 23, 2014 [7 favorites]

Added the recaps to the sidebar. The amusing thing is: they're are all "oh my god this is awful" but they all end on a slightly wistful "hope to do this again next summer" note.

(Also: and why did we not notice until now that io9 was recapping from The Dome's perspective? "I sort of identify with Big Jim, because Big Jim is also deeply misunderstood, and just wants to be loved.")
posted by We had a deal, Kyle at 6:20 PM on September 25, 2014 [5 favorites]

Dome, I'm going to give you until the count of three to get renewed before I commence my killing spree.
posted by malocchio at 8:26 AM on October 1, 2014

as if 75 of voices suddenly cried out in terror, and were suddenly renewed and allowed to whine another year.
posted by Nelson at 4:06 PM on October 10, 2014 [2 favorites]

"Producer Neal Baer had previously said that he had five seasons planned out - and that he already knew the ending..." 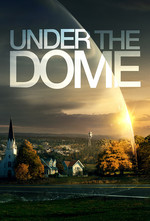