Six astronauts aboard the International Space Station study a sample collected from Mars that could provide evidence for extraterrestrial life - the first example of life beyond Earth. The crew's research methods end up having unintended consequences.


Extended IMDB Description: A crew aboard the International Space Station (ISS) performs a successful capture of a space probe returning from Mars with a sample inside. The crew is tasked with studying the sample, which may be the first proof of extraterrestrial life. However, the study eventually backfires as the organism gains intelligence. Trapped aboard the ISS with the rapidly-growing organism, the crew must find out how to kill it before it manages to escape and decimate Earth.

AV Club: What does it say that most movies about making contact with an alien species inevitably devolve into a bloodbath? Is that mankind’s fear of the great unknown rearing its ugly head? ... In the ruthless science-fiction thriller Life, a team of researchers aboard the International Space Station acquire definitive proof that we’re not alone in the universe: a carbon-based organism from Mars, small enough to fit into a petri dish. Unfortunately, and much to their surprise (though not to the audience’s), the little guy turns out to be something of a natural born killer.

The Verge: The zero-G setting ramps up the stakes in another way: Calvin was designed for zero gravity, and navigates it like a native. Watching it cruise through the ISS at breakneck speeds is like watching the first fast-zombie movie after a lifetime of slow-zombie movies. ... The filmmakers draw significantly on terrestrial octopuses for Calvin’s problem-solving abilities and boneless escape routines, but when it starts chasing down crew members, it’s more like a cheetah running down hapless antelopes.

NY Times: The movie, having started so promisingly, quickly settles for becoming yet another clone of “Alien,” as space travelers play a deadly game of hide-and-seek with a shape-shifting Martian. ... The primary suspense comes from wondering whether the killings will follow the reverse order of star billing.
posted by gemmy (12 comments total) 2 users marked this as a favorite
I found the characterisation too thin to support caring about the group or to make this interesting. The astronauts were largely so incompetent that I just got annoying. Ryan Reynolds plays Ryan Reynolds, Gyllenhaal is weird and unsympathetic and a bit of a chat with Ferguson early on doesn't make up enough ground to allow for sympathetic characterisation later. It felt like Rebecca Ferguson had been sent up to enact the quarantine protocols but that at no point had anyone bothered to pass on any training to the rest of the crew about the potential problems of having an alien lifeform on board. The payoff is dull, unearned and unimaginative.
posted by biffa at 10:01 AM on March 26, 2017 [6 favorites]

I really wanted to hear others' take on this movie, because I have opinions!

I had high hopes for liking it, as I saw this at a pre-screening for free and it's totally up my alley as far as movies go. The setting was great, as the claustrophobic corridors of the ISS and the way it was shot added a great sense of peril, and the setup with the soil sample was pretty cool. Sadly, I ended up pretty much hating it for a variety of reasons - mostly because there were a lot of things that made no sense to me, plus how much it was a re-thread of Alien.

While Calvin was still in the petri dish, holding on to his hand, they could have changed the temperature or atmosphere mix, like they did to make it more "earth" like. Why wasn't changing it the first thing to think of? What happened to the "we can track it!" technology, which just suddenly stopped working? Not to mention the heavy foreshadowing of the ending, which was annoying. And I hated Jake Gyllenhaal's character, and was sad about how long he lived...
posted by gemmy at 10:02 AM on March 26, 2017 [3 favorites]

I ended up watching this in a cinema screening on my own on Friday, and by the end was developing my opinions out loud.
posted by biffa at 10:10 AM on March 26, 2017 [7 favorites]

I loved how whenever calvin appears and is hurting/killing someone, people always get the desire to open doors :) And the dialogue is simply, well, it's just basic cliches and thoroughly uninvolving.

So yeah, a stupid film, but not exactly stupid enough to have the potential for some kind of cult status. They should've made it more crazily ridiculous, with no pretentions to serious scifi horror. A forgettable rip-off, unfortunately.
posted by sapagan at 12:09 PM on March 26, 2017 [1 favorite]

OMG, I too, have many comments about this film....

I feel like the director was all "Aw, I really wanted to make Gravity - but dang, Alfonso already did that..... how can I keep the soundtrack and the space isolation/Soyuz crash without getting sued? Oh, ADD AN ALIEN!!"

"Also, everyone must also go to the Weyland-Yutani school of bad sciencing! "POKE ALL THE THINGS!""

I felt like they had a potentially interesting direction in the first act - with the creature only reacting because someone/thing hurt it..... it didn't hurt scientist guy until he zapped it, it didn't hurt the rat until it bit it.... for 30 seconds I was all in for a movie where alien goes - "hey rat-friend - why you locked up in case? I free you! LIBERATI LAB CREATURES!" But, alas, I was denied.

Also my preferred ending is that the creature dips a pseudopod into the sea and instantly dies, cause that would have made supposed firewall planning chick's demise that much more delicious.

Oh, regarding the ending: The insistence on strictly "scientific" explanations for calvin's behaviour renders the creature perhaps not so horrible after all. What are the characteristics that make calvin this terribly scary threatening creature? It needs oxygen and food basically, right. So perhaps it will just go and live on in the ocean, eat a fish once in a while, enrich the species diversity. Y'know, not everything that breathes and eats is a threat to humanity.
posted by sapagan at 10:37 PM on March 26, 2017

Weren't these people supposedly trained to NOT save someone in the quarantine area?
This movie was so annoying.

And I hated Jake Gyllenhaal's character, and was sad about how long he lived...

His character wasn't anything special but I didn't mind looking at him for a little longer :P
posted by LizBoBiz at 5:37 AM on March 28, 2017

We both ate fish and chips during this film and in retrospect... that was a tough but well-earned choice.

If the sound is queued up a few decibels too high in the theater, it definitely isn't a better experience. I still mostly enjoyed it, though. Watching people die in 100% implausible ways is oddly soothing this year.
posted by Unicorn on the cob at 8:53 PM on March 28, 2017

I haven't seen this movie yet, and odds are good that unless I happen to turn on the tv to find it already playing, it will remain unseen, but this press junket snippet gives me such joy - Operation Jakey-Jakes and Ry-Ry (also in gif-set format which is where it found me).
posted by oh yeah! at 9:14 AM on July 1, 2017 [1 favorite]

Mr. altopower and I watched this last night and we had many many questions. I'm a big fan of space-disaster movies and Life hits most of those notes for me, but the idiocy displayed by the crew ruined it. Sure, open the door when there's a space-octopus flailing around!

The fact that Calvin was able to survive in space also made no sense. It didn't wake up until the temperature in the box had been raised to Earth-like levels, so shouldn't it have gone back into hibernation when it lost oxygen and heat energy?

I won't get into the rest of my nitpicking here (my husband was not so lucky), but the last one I'll mention: why wasn't there a comms backup plan? If the ISS has to plan for every eventuality, why wouldn't they back up their ONE ability to communicate with each other?
posted by altopower at 12:48 PM on July 27, 2017 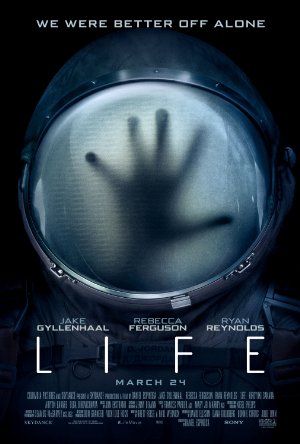