Covering the brief period between Election Night and Inauguration Day, Scandal's sixth season features a mad scramble for the Oval Office after President Elect Frankie Vargas is assassinated during his acceptance speech. Suggested talking points include dinosaur bones and boxed bricks, yet another shadowy organization of ruthless killers, endless double crosses, Huck and David Rosen's continuing awful taste in women, BTW where is Susan Ross, the attempted redemption of Parents Pope, more flashbacks than you probably wanted, and Olivia Pope's rise to power and predator. The liquor cabinet is over there.
posted by yellowbinder (2 comments total)
:-/
posted by tilde at 1:11 PM on May 25, 2017

We're a little better than halfway through this season and are very much enjoying it, if for all the wrong reasons. The plot twists and scenery-chewing are hilariously unbelievable.
posted by Short Attention Sp at 5:03 PM on June 27, 2017 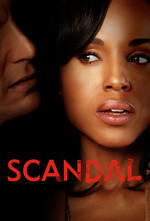