Over the past season: Jim deals with an ex, Penguin deals with an ex, Nygma makes a name for himself, Bruce goes to boarding school, Hugo Strange does some gig work, Bullock cracks wise, Barnes cracks some ribs, Barbara makes some deals, and the Tetch family make a lasting impression on Gotham.


Less vaguely: The Court of Owls have masterminded a shadowy plot to bring Gotham to ruin, in order to swoop in (ahem) and save the city from itself. Demonstrating terrible Op-Sec, the Court is alternately infiltrated and betrayed by Jim's uncle, Jim himself, and ultimately Ra's al Ghul (with the help of a henchman). Meanwhile, the Gotham underworld seethes through a number of leadership changes, including Barbara, Penguin, The Riddler, and (briefly) The Joker. Amid that turmoil, Bruce has learned the truth of his parents' death, while alienating or temporarily killing all of those closest to him. He does get a bit of martial arts training in the bargain, and a savior complex to boot.

Selina has been jilted from the straight and narrow, due to some teen angst with the young master Wayne, and seems poised to take up her incipient feline role. The Riddler, nee` Nygma, struggles (and fails) to take revenge on Penguin. Fries and Bridget sing a little Fire and Ice duet, working for Cobblepot, who has taken a turn as criminal mastermind, trumpian politician, and (currently) club owner. Running with that particular group is an up-aged Ivy, who seems to be cottoning on to her super villain personage.

Fish Mooney, after a confusing alliance with Penguin, appears to be really dead this time. Butch appeared to be dead, until a clever little reveal involving his birth name (Google Cyrus Gold, if you want a mild spoiler)... let's see, who else is probably actually dead... Barnes, I guess? Barbara, maybe? Most of the Court of Owls? Maybe Jerome Joker? Several hundred dozen innocent Gothamites and Mario Falcone, for sure.

The show has been renewed for a fourth season, so in the fall we will likely get to see Bruce taking up the mantle of psychopathic vigilante crime fighter, and watch the villains continue to flesh out their respective niches in the Gotham City's vibrant ecosystem of gimmicky crime. I imagine that Gordon will find something to occupy his time - driving another romantic partner to murder?
posted by codacorolla (9 comments total) 1 user marked this as a favorite
I thought that this was a GREAT season, even in spite of a few clunker storylines. I'm always impressed by the way that writers can craft small, self-contained arcs that stretch over a few episodes, combine those into larger season arcs, and still make each individual episode have a lot of forward motion.

The general progression over the season has been pretty dramatic: Bruce is a hero, Selina is a villain, Penguin and the rest of the rogues gallery have all moved forward at least a little bit with most of the primary figures being costumed and in place. Everything continues to be fun, too. Even the more maudlin storylines (anything involving Jim's 'darkness') have had fun bits, and characters who seemed one note and boring (like Lee or Barnes) are generally given a star turn - typically as a homicidal villain.

As always, the direction, production design, and script are fun, snappy, and surprisingly well produced for a TV show with ~20 episodes.

I'm most definitely coming back for season 4, and have to say that this has been getting better and better each year.
posted by codacorolla at 8:25 PM on June 5, 2017 [3 favorites]

Totally agreeing that this show has been getting better every year. The plots are over-the-top in the best possible way; I might have been critical of that at first, but now I love how the show leans in to comic book logic and plotlines. And the cast is so good all around. There's not a character among the regulars that I don't want to see more of. I was iffy on Bruce and Selina in season 1, but they've grown into their roles nicely. Even with a second-tier character like Butch, I was glad for the reveal that he wasn't dead (and likely to have a bigger role in future seasons) because I like Drew Powell in the role so much.

The cast is a fun bunch to follow on Twitter, if you're into that sort of thing, as they all seem to be having the time of their lives making the show.
posted by DevilsAdvocate at 9:56 AM on June 7, 2017

I also like how over the top it's been. But ageing up Ivy is still pretty unforgivable.
posted by Catblack at 6:40 PM on June 8, 2017

I wonder where Babs goes from here. Aesthetically, she'd make a good Harley (blond, crazy eyes, huge smile) but it doesn't make tremendous sense given her past interactions with Jerome.

Will miss Penguin and Nygma fighting, those were my favorite scenes of the season. Glad Tabs survived. Glad Butch 'survived' Sad that Butch and Tabs is likely over.

The villains are so much more fun than Jim and Lee on this show. It's tough to be the boring good guy.
posted by leotrotsky at 6:18 AM on June 11, 2017

I'm interested to see where proto-batman is going to go. Jim is a (necessarily) boring hero, even though I think he's more interesting than when the show first started. Young Bruce is primed to fill that same role, but has the potential to be either more entertaining, or far, far worse (with adolescent angst filling in for Jim's gruff machismo, which is perhaps worse).
posted by codacorolla at 7:00 AM on June 13, 2017 [1 favorite]

Loved this season- though I felt deeply bad for Carmine Falcone.
posted by corb at 8:00 AM on October 21, 2019 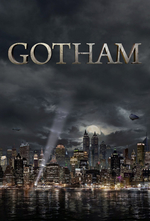