Blindsided by a new generation of blazing-fast racers, the legendary Lightning McQueen is suddenly pushed out of the sport he loves. To get back in the game, he will need the help of an eager young race technician with her own plan to win, inspiration from the late Fabulous Hudson Hornet, and a few unexpected turns. Can Lightning strike again?

Lo and behold: here’s “Cars 3,” a smiley-faced Frankenstein’s monster comprised of bits and pieces lifted from every other sports film in existence. The screenplay rips off the main plot of the Tom Cruise racing picture “Days of Thunder” (knowingly, though; a supporting race car character is cleverly named “Cruz”) and merges it with bits of “Rocky III,” the one where the champ went soft and had to find his edge again; “Rocky IV,” where the champ had to train in snowy Siberian woods to fend off a challenger who relied on steroids and fancy machines, and “Creed,” where the champ realized that passing wisdom on to the next generation can be as satisfying as acquiring it when you’re young. There is, at the level of plot and characterization, not a single major element in this movie that you haven’t seen elsewhere, possibly in a “Cars” or “Planes” film. Despite its lack of originality, as well as its lackadaisical storytelling and world building, it satisfies in that amiably weird way that only a "Cars" film can.

Well, as a movie, Cars 3 is pretty ho-hum and derivative; it’s basically an automotive Rocky III—Lightning is past his prime, but he’s determined to come back for one more race—with a surprise dash of Million Dollar Baby. (Not that part.) It’s loud and colorful, and there’s enough vroom-vrooming to keep any automobile-obsessed kid happy for an hour and 49 minutes, but that’s about it. As a jumping-off point for bizarre thought experiments, though, Cars 3 is unparalleled. I’d argue that overthinking Cars is the whole point of seeing a Cars movie, at least if you’re over the age of, let’s say, 9.

Cars 3: A Children’s Movie, and a Fable About Mentorship

The Cars franchise revolves around the ways that relationships can enrich both private and professional lives. In the first movie, Lightning learns to accept a mentor and gains a friend. In return, Doc realizes that the great joy of his life was not racing, but teaching Lightning. The third installment is similarly optimistic about the benefits of strong mentorship: When Lightning’s chance to come back and prove himself on the track finally arrives, he realizes halfway through the race that it’s his time to bow out and Cruz’s time to take her chance. In the face of protests from his sponsor, and intimidation from the story's villain, Jackson Storm—which reignites Cruz's self doubt—Lightning realizes that he can be the mentor Cruz needs to win. He knows that while she may be, under the hood, a racer just like him, she still struggles to see herself as one, which is the final hurdle that she must overcome, with a little encouragement from her mentor. Seeing her opportunity, Cruz takes it and wins.

Saw this because of my car-obsessed preschooler. I had three major reactions.

One, I felt real sad when we first saw the Rust-eeze guys on screen because it reminded me of Tom’s passing. Underscored when only Ray spoke.

Two, being super fuckin creeped out when later in the movie Ray wasn’t the only one who spoke. I guess when you spend decades on the air it’s not hard to find audio of you (or they composited it using some of the modern tools that let you use samples to construct new stuff from who,e cloth) but holy hell it was weird to hear a years-gone dead man voice-act as an animated car.

Three, I kinda liked that Fillion’s character wasn’t a one-note bad guy. He’s not real sympathetic but he’s also not a complete cad about his desire to make money on Lightning. He’s not a good guy but he’s got some complexity.

Other than that the only thing I have to say is that the metaphysics of the cars/planes world continues to be super weird.
posted by phearlez at 8:40 AM on August 4, 2017 [1 favorite]

I was worried they were going towards a sort of anti-technology "old ways are best" message. But it would make even less sense in a racing movie than it did in "Trouble with the Curve". Turning the movie into a story about passing the torch and mentoring the next generation was a good fit.
posted by Gary at 10:46 PM on August 4, 2017

Cars 3 is pretty ho-hum and derivative; it’s basically an automotive Rocky III
...
This was not painful to watch.

Actually, this was head and shoulders above the other cars movies in my opinion, even though saying that might be damning with faint praise. The story was more complex, and let's be honest, getting old and feeling less useful (if that's the right way to put it) is something that I am becoming familiar with.
posted by Literaryhero at 5:03 AM on August 7, 2017

I liked it a lot. My daughter (almost 6) was literally jumping and cheering at the end in the theater, it got her in a way no movie ever has.

Car 2 is a garbage dump, toy commercial and Cars 1 is just "Doc Hollywood" with cars instead of people.

This movie is not an all time great but it was the first cars movie to feel like a real "Pixar Movie" if that makes any sense.
posted by French Fry at 8:58 AM on August 10, 2017

Lea DeLaria was great as Miss Fritter, the butch demolition derby school bus. But there was also that short moment at the end of the final race, when race data analyst Natalie Certain, looking down at the track, suddenly seems very smitten with Ramirez.
posted by Kabanos at 10:44 AM on August 15, 2017 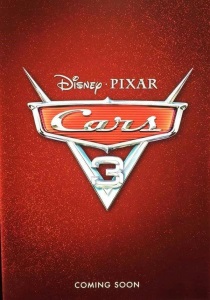