During a mission to a jungle planet, the crew finds a Kino from the future with a recording that shows their deaths.


This episode won a Writer's Guild of Canada Award for Best One Hour TV Series.

Quote:
Dr. Rush: "For a moment there I thought we were in trouble"
posted by zarq (9 comments total)
Man, I love this one. I'm glad it won an award. I especially appreciated Scott *not* saving the day right at the end.

(This also continues the franchise's long tradition of screwing around with time - SGU will have a number of plots that hinge on time travel in fascinating ways.)
posted by mordax at 6:04 PM on August 14, 2017 [1 favorite]

Hands down, this was my favorite SGU episode to date. It's deep and nuanced and layered.

The character development and intricacies. The plot. The body horror from the chest burrowing aliens. The crew dying from what turns out to be the water they've been drinking. And the urgent ending which wasn't really an ending. No tidy resolution here. Just a warning from Scott to the crew that this is the third time around and they don't have much time.

Eli talking about his mom, and revealing that her illness is HIV. The annoyance of everyone around him that he is filming and narrating their lives, rather than doing actual work. Yet the Kino recording is what saves them. His admission to Chloe as she dies.

Also, the aborted "WHAT. THE FU-" As they go to commercial break was hilarious and a bit horrifying. And him facing their mortality.

Rush kind of losing it at the end, "For a moment there I thought we were in trouble" and running into the unstable wormhole. (Bonus points for the skull he holds up in the second timeline. His own.) Colonel Young noting in the present that the line is from the hopeless ending of Butch Cassidy and the Sundance Kid. Also, we learn about ascendance from Rush. And time loops. And Stargates and solar flare. Continuity from past Stargate series.

Lt. Scott coming face to face with his own failure to keep the team alive.

TJ, who is only a medic and not a medical doctor, losing Chloe and then crying as Park attempts to comfort her. This is possibly the first time she has lost patients.

And the revelation that the small amount of water they brought back from the ice planet in episode 6 was contaminated with a previously-undetected microorganism. Which is a wholly believable problem!

And the revelation that the small amount of water they brought back from the ice planet in episode 6 was contaminated with a previously-undetected microorganism. Which is a wholly believable problem!

This was a lot of what drew me into SGU in the first place: their resource struggles were complicated, believable and crushing. I never really felt like the people on Voyager or BSG were going to starve to death, but Chloe's dad suffocated patching Destiny's life support right in the pilot, and things never really got a ton better for them as the series went on.

I absolutely loved the problem with the water, and them needing the horrible chest bursting monsters to fix that.
posted by mordax at 9:21 PM on August 14, 2017

But didn't you find it too convenient that the Alien-type creatures/cure were on the very next planet? Wasn't it annoying that the episode ended just as things were getting interesting. Is the audience just supposed to dream up how the crew managed to get it right in this time loop or dream up the many time loops it may have taken for them to get it right? And in the subsequent timelines, apparently nobody died? All that angst and emotion was for nothing since everything reset.
posted by jojo and the benjamins at 7:42 PM on August 15, 2017

But didn't you find it too convenient that the Alien-type creatures/cure were on the very next planet?

This is a fair point. I don't want to talk about it too much because that veers into spoiler territory.

Wasn't it annoying that the episode ended just as things were getting interesting.

Eh, I feel like they gave us enough to know how that was supposed to go down: basically, just like the loop that failed, with a few more things breaking the crew's way. (IMO, this is a more brutal/horrifying version of TNG's Cause and Effect.)

All that angst and emotion was for nothing since everything reset.

Well, sort of. The crew got to get an apocalyptic message from themselves, which has to be a mindscrew. (I mean, how weird would it be to hold your own bleached skull? That's gotta mess a person up, even someone already as troubled as Rush.)
posted by mordax at 1:32 PM on August 16, 2017

mordax, the show is no longer being produced so I think talking about it is fine. But feel free to memail me if you prefer. I embrace spoilers.
posted by jojo and the benjamins at 6:19 PM on August 16, 2017 [1 favorite]

It's a rewatch thread, so I guess this is all fair game. Disclaimer: been awhile since I saw this.

Destiny's original mission - pre-Rush/SGC - involved taking a bunch of Ancients to investigate a big cosmic mystery pertaining to the origin of the universe (1). The primitive stargate network encountered in SGU was seeded by a bunch of ships that preceded it to sort of lay the groundwork, which transmitted data back about the nature of the planets in its path, including stuff like pathogens and antidotes.

The Ancients never showed, (they had a bunch of problems of their own, and have always been depicted as Neglectful Precursors even when stuff was breaking their way), so the ship was just running on autopilot until the SG people showed. However, pre-Ascension Ancients are biologically almost indistinguishable from modern humans (2), so the ship's data on stuff like the contaminants or chest bursters is still good for the SGU crew.

The ship is using that to plot where to take them, and making at least a few concessions to their safety, IIRC. It's unclear precisely how 'aware' the ship is of what's going on, as it's a more primitive version of Ancient tech than has appeared in previous shows, but the answer is 'at least a little.'

(1) None of this gets much of a payoff due to the show's cancellation, which was a shame. A couple of later episodes have indirect encounters with aliens that might have had interesting implications for the entire universe, (possibly shedding some light on what the Ascended Ancients were busy with).

But didn't you find it too convenient that the Alien-type creatures/cure were on the very next planet?

Not really. We have microorganisms on this planet for which we've found cures right here. Or at least, counter agents.

Wasn't it annoying that the episode ended just as things were getting interesting.

For me, definitely not. I far prefer a story like this where the ending is a bit ambiguous. I don't need to watch the crew go through the day again and tie every plot point up in a nice little bow. That's much more boring as far as I'm concerned. .

Possibly! I'm okay with that.

And in the subsequent timelines, apparently nobody died? All that angst and emotion was for nothing since everything reset.

SGU is a series that is far more character-driven than previous incarnations of Stargate. You're going to see how the characters cope with depression and being unable to return home. To disappointments and failures, betrayals and fear. To fleeting successes. It isn't Battlestar Galactica. But it's also not an action-adventure romp the way SG-1 and Atlantis were.
posted by zarq at 12:29 PM on August 17, 2017

That's helpful feedback. I do prefer action-adventure romps and I really dislike uncertainty. My expectations and assumptions about the show need to be recalibrated.
posted by jojo and the benjamins at 10:52 AM on August 19, 2017 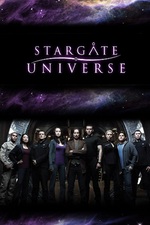