As a new conspiracy takes shape, Matt finds old habits are hard to break, Jessica gets in over her head, Luke tracks a lead, and Danny meets his match.


Vulture recap - Talk to the Hand

*Matt listens to earthquake aftermath from the rooftop, and feels compelled to intervene when he hears a storeowner about to shoot some juvenile looters. Later, he is drawn to open his trunk of Daredevil gear, but is interrupted by a phone call from Foggy. Matt and Foggy catch up with a drink at Josie's. Foggy offers to give Matt his overload of pro bono cases, so he can try to keep himself too busy for vigilante-ing.

*Misty arrives at John Raymond's apartment to join the investigation started by Jessica's calling in the piles of explosives (one brick of which Jessica pockets on her exit).

*At the dojo, Colleen tells Danny that maybe they have allies in the battle, that dead sewer-guy's sword was one of only 10 like it, and that there's a workshop in the city they should go to for clues. When they arrive at the workshop, they find several dead bodies in the back, as well as a drawing of K'un-Lun on the wall. Later, people in hazmat suits arrive and begin spraying acid on the bodies.

*Luke clears debris, while Claire does first aid. He tells her he wants to try to save Candace's brother from whatever trouble he's gotten into, she points him to the current low-life bar of choice, 'Trouble and a Pair of Dice'. At the bar, Luke finds Turk and threatens a lead out of him - the guy recruiting the Harlem youngsters is known as White Hat. Luke tracks him down, and is about to give his location to Misty for a warrant, but then sees Candace's brother and follows him instead.

*Alexandra listens to a string quartet, a private performance for her generous donation to the Philharmonic. She tells a story about Brahms as if she witnessed it first-hand. Madame Gao arrives to tell her that their way is blocked by an unbreakable wall covered in K'un-Lun inscriptions, but Alexandra believes it's a door not a wall. Later, we see that Alexandra has Stick captive.

*Jessica does some detective work, looking up transfer of asset files, but is finds the trail goes back further than the building's files go. Hogarth arrives and warns Jessica to drop the case, that John Raymond is now on the terrorist watch list. Later, Hogarth tells Foggy that he needs to keep an eye out for Jessica, to keep her trouble away from Hogarth's firm.

*Jessica gets call from Trish about how her radio station is quashing questioning the official story on the earthquake. But Jessica is quickly distracted by the discovery that John Raymond is in her apartment holding a gun on Malcolm. He tells her she should have listened to his warning not to look for him, that now "they" will kill his family. She tries to convince him to let her help him, but then Elektra attacks, and Raymond shoots himself before she can kill him. Jessica races after Elektra, but she disappears, and Misty arrives and arrests Jessica.

*Back at the workshop, Danny and Colleen attack the acid-sprayers. One runs outside, and is revealed to be Candace's brother. Luke intervenes to save him, and a pretty hilarious Iron Fist vs Luke Cage fight ensues. In the aftermath, Candace's brother is arrested.

*Back at the station, Misty's interrogation of Jessica is interrupted by the arrival of Matt Murdock, who introduces himself to Jessica as her new lawyer.
posted by oh yeah! (13 comments total) 2 users marked this as a favorite
That look of mild annoyance on Luke Cage's face as he is swatting away attacks from Iron Fist.
posted by roolya_boolya at 4:33 AM on August 19, 2017 [12 favorites]

Luke's reaction to Danny's ineffectual punching had me cackling with glee. I know this series has gotten a bunch of 'meh' reviews, so I'm going into this keeping my expectations low, and little comedy moments like that are my reward.
posted by oh yeah! at 5:28 AM on August 19, 2017 [3 favorites]

Oh god, that ineffectual punching made me cackle with joy, and is the sole exception to my EVERY SECOND WITH IRON FIST ONSCREEN IS A MOMENT WASTED policy. Every part of me wishes that his Dragon Ball Z punch had had the same effect, but I guess then he wouldn't have been part of the Defenders, and the show would be staffed entirely by interesting characters.

Sigourney Weaver's character delights me, by the way. I know she's bad, but I love the tongue-in-cheek references to her knowing all these famous historical people, and how beautifully and well her character performs being riiiiiiiiiiiiiiiiiiiiiiiiiiiiiiiiiiiiiiiiiiiich. Like, the signalling has been spot on so far -- the clothes she wears, the makeup she wears, the hair, the concierge health care, the real estate, the private performance by the Philharmonic in return for her enormous gift. Mr. Machine and I were scoping the space, and we thiiiiiiiiiiiiiiiiink it's in Columbus Circle, based mostly on the big shiny golden statute and the view of Central Park? But we aren't NYC'ers.

(Mr. Machine is a recovering lawyer, and was having FUCKING CONNIPTIONS at the turning-over-of-cases, which is ABSOLUTELY NOT how law firms handle that, and he was like WHAT KIND OF FANCY LAW FIRM REPRESENTS THE WORKER SIDE OF WORKMAN'S COMP?)
posted by joyceanmachine at 10:54 AM on August 19, 2017 [4 favorites]

PS: Thanks, oh yeah!, for the little recap. In a show that I binge like this, it's hard to remember what happened in what episode!
posted by joyceanmachine at 10:57 AM on August 19, 2017

In a show that I binge like this, it's hard to remember what happened in what episode!

Me too, this is the only way for me to remember which episode is which once the threads start popping into Recent Activity in random order. I'm back from my errands now, will spend the rest of today binge-watch-posting to the finale.
posted by oh yeah! at 12:40 PM on August 19, 2017

Another vote for 'Danny ineffectually flailing at Cage was hilarious.' That was gut-busting, especially when Cage just got back up after being tossed against a wall by an actual glowy punch.
posted by mordax at 1:05 PM on August 19, 2017 [1 favorite]

Yes, the string quartet was playing in the Allen Room of the Jazz at Lincoln Center which is in Time Warner building at Columbus Circle.
posted by plastic_animals at 7:53 PM on August 19, 2017 [2 favorites]

Mike Colter/Luke Cage feels like, though, the only actor who's serious about the job and actually acts while everyone else is just having a good time and yakking it up.

The more the show can take the piss out of Iron Fist the better. They can't tear him enough for me. His show was garbage that I watched every stupid second of -- blame the sunk cost fallacy.

If nothing else, these episodes have made me excited for Season 2 of Jessica Jones.
posted by Jugwine at 5:53 AM on August 21, 2017 [1 favorite]

Ok, suspended disbelief is annoying. If i had an acid that dissolved bodies, and random strangers started fighting me, i would not drop my body dissolving acid to fight them with my fists.

Also, i don't care if i am missing key plot points, it is very hard to not just fast forward through all the iron fist scenes. I only got two episodes into that series before i was just done. We need more Jessica Jones.
posted by Suffocating Kitty at 9:18 AM on August 21, 2017 [1 favorite]

I would just really like to know what's up with the lighting. I keep missing important points because I just can't see what's going on.
posted by corb at 6:41 AM on August 23, 2017

Did I miss some part of the end of Daredevil season 2 where he swears to no longer be Daredevil?

I didn't think that was acid they were spraying on the bodies, it didn't look like on my TV that there was any dissolving. I thought they were spraying bleach (which would still require hazmat suits if you were using that much), which also makes identifying the bodies impossible.
posted by numaner at 5:48 PM on August 23, 2017 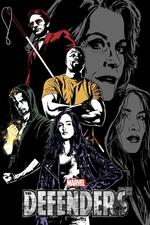