Robert Ford, who's idolized Jesse James since childhood, tries hard to join the reforming gang of the Missouri outlaw, but gradually becomes resentful of the bandit leader.
posted by Fizz (3 comments total)
The Assassination of Yogi Bear by the Coward Booboo
posted by Rhaomi at 1:48 PM on November 17, 2017 [5 favorites]

I really like this movie, particularly the narrow-depth-of-focus gimmick in the cinematography. It's so pretty that I'm surprised more movies don't lean on the technique.

Also, this is the first movie where I noticed Garret Dillahunt playing a low-IQ rustic doofus, and he seems to have made it a minor specialty ever since.
posted by paper chromatographologist at 5:43 PM on November 17, 2017 [3 favorites]

Yeah, this is a really good movie that somehow flies under most people's radar.
posted by Thorzdad at 10:25 AM on November 20, 2017 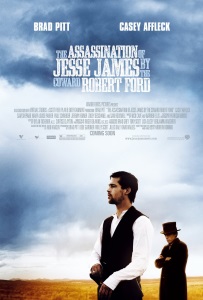