Mr. Robot wants answers; the FBI closes in; Angela hits the rewind button. Leon comes back for a bit of babysitting.

The rich will always control any revolution on a disheartening Mr. Robot (Alex McLevy for A.V. Club)

R.I.P., Trenton and Mobley. The former Fsociety hackers were in over their heads right to the very end, fearful and dispirited ideologues who gave up on their revolutionary dreams in the name of safety and security, only to see their actions push them into exile, and finally death. The dream of a better world became a nightmare for the two of them, and all their talk of potentially reversing the results of 5/9 disappeared into the darkness, along with their lives. It was a bleak and unsettling end for two people who had been with Elliot and Darlene almost since the beginning, and a harbinger of worse things to come—an albatross for the Aldersons.

Producer, writer and technology expert Kor Adana joins THR every week to discuss the latest episode of the USA thriller.

And then there were two. Three, technically, if you view Elliot Alderson (Rami Malek) and Mr. Robot (Christian Slater) as separate entities.

The Mr. Robot Hack Report: Worst Thanksgiving ever (Russell Brandom for The Verge)

Mr. Robot is back, and the C Y B E R is back, too. The show takes a special interest in showing off the details that usually get glossed over, often drawing on real hacks and real cybersecurity problems. So after every episode, I’ll be breaking down who got hacked, how, and with what. It turns out, there’s a lot more to each one than you can see on-screen.

THR interview kind of shuts down the transhuman theory with this comment:

To quote John Petaja, "Angela is not taking it well." She's having a complete mental breakdown. I think we're witnessing the first steps on a journey to madness. Every step of the way, Angela has been naïve about Stage Two. It seems fitting for Angela to start disassociating from reality in the wake of the terror she caused.

The interview also has more about Leon's character.
posted by filthy light thief at 6:57 PM on November 23, 2017

This is pretty much the only show I ever stopped watching after two episodes because it "hit too close to home". I'm not bragging, just saying. I'm not surprised it's won awards, it'd be a favourite of mine if not for that feeling i get watching it.
posted by some loser at 9:33 PM on November 23, 2017 [1 favorite]

Trenton and Mobley were an interesting duo - they served a purpose in the first season, but after they went into hiding and weren't featured, they became set pieces, which is sad. At the same time, having the show split another one or two ways, adding to the focuses on Elliot, Mr. Robot, Darlene, Angela, Tyrell and Joanna, Whiterose and Phillip Price, with this season's addition of Irving (who has Leon working for him, if you assume the World's Sexiest Grandpa keyfob in the Cadillac is another of his "relate to people" element).
posted by filthy light thief at 6:14 AM on November 24, 2017

If I were more into the transhumanist and ARG elements of this show, I'd say this Forbes article on transhumanism and the future of humanity being a trending article is an indication of show elements to come, but for now I'll say it's a co-inki-dink.
posted by filthy light thief at 6:17 AM on November 24, 2017

What really got me this episode was the reveal that Whiterose was playing Angela with the hints at something supernatural.. and playing all of us, too. I had moved over to near certainty that there was going to be some sort of time manipulation element revealed at some point. But no, I was led along the same garden path Angela was.
posted by antinomia at 6:53 AM on November 24, 2017 [5 favorites]

I so loved the first season and rather detest the central conceit of the second and browsing some comments twinge my interest I think I still must wait to binge without ads in one long swoop, get a bit sloshed, cozy, quiet, but well, anyone got a good online source for amphetamines, really getting physically into the authentic mood, just for one binge... oh never mind ;-) gunna hack ur comments now, l33t 4evah dudes!
posted by sammyo at 7:42 AM on November 24, 2017

Yup, I was way off track with Angela, too. Hrm. Not sure how I feel about that and Whiterose's whole thing with Price being a result of feeling insulted ("I had to ask twice").

Not sure how I feel about that and Whiterose's whole thing with Price being a result of feeling insulted ("I had to ask twice").

Asking from abroad, but: is anybody troubled by the Chinese=evil that is turning out to be a main narrative axis for htis whole story? Or is this OK because whiterose is such an awesomely nuanced character?
posted by progosk at 10:29 AM on November 25, 2017 [1 favorite]

I haven't gotten Chinese=evil from this series. It's all individual players. I suppose some could draw generalizations from how different race actors are used to depict various characters, but that would also involve questioning how Rami could possibly be Christian's son, and other things. I see Whiterose as threatening not because s/he's Chinese but because of the scheming and backroom power-wielding and the willing nefariousness of what is being carried out. Post USSR Bond villains aren't taken to be representatives of their nationalities (as far as I know)... same should be applied here.
posted by hippybear at 12:25 PM on November 25, 2017 [2 favorites]

It is obvious that Angela thinks that the Dark Army and Whiterose intend to turn back time and, 'fix,' the world. Just back up far enough and everybody comes back and can make different decisions. Perhaps this is what the linear accelerator from S3E1 is going to do once it gets to the Congo. I have thought this since the beginning of the season and this episode clinched it. Note that I am only saying that this is what Angela believes. I put no money down on this being the actual goal of WH and the DA.
posted by Ignorantsavage at 10:02 PM on November 25, 2017 [2 favorites]

It explains Whiterose's obsession with time.

I love how every episode so far this season plays with time in a different way (reminds me of Einstein's Dreams). This episode was all about remote control, sometimes literally. Pausing, playing, rewinding, viewing screens remotely … almost every scene had some aspect of this.
posted by iamkimiam at 5:05 AM on November 28, 2017 [1 favorite]

This episode was delicious. I really struggled with the start of this season but now I think the show has found its stride. I loved the scenes of Whiterose wrecking Phillip at the club. (Is it still Mar-a-Lago?) The way he is in complete control and humiliates Phillip in public, so terrific.

So Angela definitely has bought into a parallel dimensions / time-travel story, right? I mean it seems obvious. But does the show expect us to think it's obvious? I can't tell, they've never really said any of the words out loud. And then even if Angela believes it nothing else is clear, particularly whether that's Whiterose's plan. Moving your super-secret high tech science building to the Congo seems like a very strange way to move forward, but maybe this will all be explained in time.

I'm going to assume that all the time-travel-y hints a la Back to the Future (plus whiterose's obsession with time) means at least a forthcoming attempt using their LHC gadget to alter time somehow - and not solely a manipulation of Angela. ;)
posted by bitterkitten at 12:00 PM on November 30, 2017

is anybody troubled by the Chinese=evil that is turning out to be a main narrative axis for htis whole story?

yes, it is driving me nuts, is yellow peril othering, and they have two episodes to fix it or I am done.

Finally catching up. All the acting in this show, and in this episode especially, have been amazing. Tyrell breaking down after absorbing the news of his wife's death. Angela and the remote. Whiterose' chilling dissection of why he's ruining Phillip's life. It's all just so good and mesmerizing.
posted by numaner at 9:52 PM on June 13, 2018

"Your little revolution was only allowed to happen because it was bought and paid for by people like them." 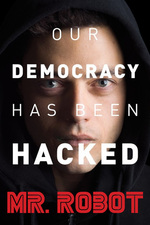