A miserable conman and his partner pose as Santa and his Little Helper to rob department stores on Christmas Eve. But they run into problems when the conman befriends a troubled kid, and the security boss discovers the plot. Starring Billy Bob Thornton, Tony Cox, Brett Kelly, Lauren Graham and Bernie Mac.

There are certain unwritten parameters governing mainstream American movies, and "Bad Santa" violates all of them. When was the last time you saw a movie Santa kicking a department store reindeer to pieces? Or using the f-word more than Eddie Griffin? Or finding a girlfriend who makes him wear his little red hat in bed because she has a Santa fetish? And for that matter, when was the last movie where a loser Santa meets a little kid, and the kid doesn't redeem the loser with his sweetness and simplicity, but attaches himself like those leeches on Bogart in "The African Queen"?

Movie critics have been accused of praising weirdo movies because we are bored by movies that seem the same. There is some justice in that. But I didn't like this movie merely because it was weird and different; I liked it because it makes no compromises and takes no prisoners. And because it is funny.

Part of the Holiday Movie Club
posted by the man of twists and turns (5 comments total) 3 users marked this as a favorite
Christmas wouldn't be complete for me without a double-header of Elf followed by Bad Santa. Nobody does sleazy quite like Billy Bob Thornton.
posted by essexjan at 1:07 PM on December 9, 2017

The best dark comedies are the ones that actually aren’t comedies. When Tony Cox is yelling about percentages to a dying Bernie Mac, that’s some prime crime/neo-noir. It’s almost like Tony Cox is in a different movie than the rest of the cast.
posted by infinitewindow at 6:15 AM on December 11, 2017 [1 favorite]

I tried making it through this film once, but just couldn't. I felt as if it was trying too hard to play up how "bad" Santa/Thorton was. Maybe I finished it, but I've expunged that memory from my mind. I honestly don't know anymore and have no desire to go back.
posted by Atreides at 2:35 PM on December 11, 2017 [1 favorite] 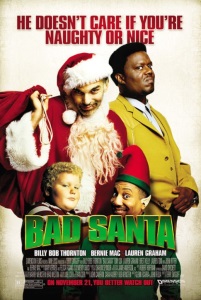