Ebeneezer Scrooge (Alastair Sim) contentedly meanders through his life as a cruel miser until one fateful Christmas Eve when he is visited by three ghosts. The spirits show him how his behavior over the years has made him a lonely, bitter old man, and how his heart has grown colder. Using events from Scrooge's idealistic past, dreary present and dismal future, the apparitions try their best to melt his steely soul. Tightfisted Ebeneezer Scrooge learns the error of his ways through the intervention of the ghost of his former partner and of the three spirits and, just in time for the holidays, manages to make everyone's lives a little brighter, his included! Released as A Christmas Carol in the USA.


84/89 on Rotten Tomatoes, 8+ and 5 stars on Common Sense Media, the 1951 adapdation (Archive.org, youtube) of Dicken's most famous novel may be the best Christmas Film of all time
A CHRISTMAS CAROL (1951)

The 1951 version was not, however, an instant classic. In fact, for decades it fell in the shadow of the 1938 version starring Reginald Owen. After being released in its native England under the title Scrooge, the film was shipped to America (retitled A Christmas Carol) for its holiday premiere by United Artists, its North American distributor. It was scheduled for a showing at Radio City Music Hall until the Hall's management expressed the belief that the film was too depressing for its audience. What movie the management of Radio City Music Hall was thinking of remains a mystery.

When A Christmas Carol was finally released in the states, it didn't help that its premiere night wasn't Christmas but... Halloween. Well, it is a ghost story, it's true, but the spirit of the story belongs in a different hemisphere altogether. The box office was meager and as quickly as it came, it went. Three years later, it received a television showing and slowly, like another Christmas classic, It's a Wonderful Life (1946), it began to gain ground in the realm of Christmas Carol adaptations. As the decades rolled on its popularity increased until, by the eighties, it was the most beloved adaptation of the novella committed to film. A large part of that success is due in part to the extraordinary talents of Alastair Sim.

Although there will always be dispute over which is Alastair Sim's finest screen performance, there's little doubt as to which is the best known. His 1951 characterisation of Charles Dickens' notorious curmudgeon Ebenezer Scrooge is not only generally regarded as definitive, but is also the only one of his films to achieve wide circulation in America, where it became a Christmas television perennial to rival The Wizard of Oz (US, 1939). There, it was known by the title of Dickens' original story A Christmas Carol, but in Britain it was named after the lead character.

This movie is is over 60 years old, but has aged beautifully as the acting, the lighting, the editing, the musical score, the thorough backstory and the timing, deliver to the viewer a depth not reached in other versions. Especially effective was the stark black and white contrast, because instead of making the film look dated, it did just the opposite, enhancing the cold misery and the horror in grand noir style. No one suffered more from the cruel self-reflection than this Scrooge, Alastair Sim, perhaps the most awesome actor to ever fulfill this role. This hard-hitting version revealed more vividly the events that shaped Scrooge’s actions and attitudes as portrayed by the Ghost of Christmas Past.

posted by the man of twists and turns (8 comments total)
Alastair Sim's acting when he has his revelation xmas morn is something to behold - amazing acting, and completely hilarious. I love this movie.
posted by parki at 4:22 AM on December 13, 2017 [1 favorite]

I have this on DVD and watch it every year (frequently twice in a row!) as I wrap presents. Alistair Sim spoiled all other Scrooges for me. And Patrick MacNee shows up as young Marley!

Also I love how much back story is included in this version. Poor Ebenezer!
"Never to be lonely again?"
"Never, as long as I live."
"Well then, you must live forever Fan!"
[sob].
posted by acanthous at 7:09 AM on December 13, 2017

Especially effective was the stark black and white contrast, because instead of making the film look dated, it did just the opposite, enhancing the cold misery and the horror in grand noir style.

This. The very unfortunate colorized version loses all the impact of the B&W version (which, on old analog broadcast TV was often even more contrasty). Not to mention the shitty color palette of early video colorization.
posted by briank at 10:31 AM on December 13, 2017

Alastair Sim's acting when he has his revelation xmas morn is something to behold - amazing acting, and completely hilarious. I love this movie.

Yes. This movie is a directing and acting masterclass. Sim absolutely sells Scrooge's transformations from idealistic boy to venial young businessman to grasping aged banker without a crack in the mask. And then the tension is so wonderfully broken in those last few scenes.

The movie also makes the point, lost I think in other adaptations, that Scrooge has had some just awful Christmases in his life.
posted by gauche at 11:37 AM on December 13, 2017 [1 favorite]

"Alas, as a bachelor, I'm a wretched outcast, with no right to express an opinion on such a tender and delicate subject. Have I, dear, distant, immovable, Miss Flora?"

"Oh, you really are quite incorrigible, Mr. Tupper, quite beyond hope."

The scene at the pawnshop, with the undertaker, the laundress, and the charlady all haggling over the price they'd get from the items they scavenged from Scrooge's rooms and very corpse: "He didn't die of anything catching, did he?!"

The moment when Scrooge slips a guinea into his charlady's hand and she says, "A Christmas present? For me?" as though no one ever gave her anything in her life, always gets to me.
posted by orange swan at 9:20 AM on December 15, 2017 [1 favorite]

For me, there is no Scrooge but Alastair Sim. (Even apart from this, he basically walked away with every movie he was ever in.) I always get a little misty at the end when Tiny Tim calls out “Uncle Scrooge!” and runs over.
posted by holborne at 6:18 PM on December 31, 2017

Perhaps the most touching scene in the film is when Scrooge is on his redemptive journey and arrives at his nephew, Fred's, Christmas party, an invitation he previously disregarded with disdain and without so much as the courtesy of reply. Upon his arrival, he is greeted at the door and sweetly encouraged by a maid to enter the inner room where the party is taking place (and in the midst of singing the lovely, "Barbara Allen"). First he is warmly met by his nephew, Fred, and then by the eyes of Fred's wife. Scrooge approaches her, gives a mild chuckle, then shoulder shrug before intoning (while she looks at him almost sadly), "Can you forgive a pig-headed old fool for having no eyes to see with, no ears to hear with, all these years?" Her response of, "You've made Fred so happy," is so simple, but apt for the time and place. If that doesn't melt your heart...just wonderful!
posted by All414All at 9:19 PM on April 12, 2020 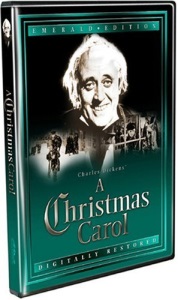