And that is the title. Ruth (Melanie Lynskey) wants people to stop being assholes. After her home is burglarized, she sets out to right a wrong.

"I Don't Feel at Home in This World Anymore" is an American independent film from the 1990s that just happens to have been released this year.

... this is a film about the utter indifference and outright hostility that people encounter every day, and how essentially decent people like Ruth suffer and suffer through it, almost always silently, until they finally snap.

... The film is worth seeing for its interest in eccentric but realistic people, in particular Ruth, who's played with great intelligence and exactness by Lynskey. Lynskey, who first came to moviegoers' attention in "Heavenly Creatures," is one of those actresses I'm never not glad to see, and it's a treat to see her front-and-center here, carrying an entire movie mainly with her eyes, face and shoulders. A performance like this one can be quite tricky—you're essentially reactive a lot of the time, more of a sponge for the film than the motor driving it along—but Lynskey makes everything active by letting you feel Ruth's emotions and sense her train of thought as she puts various pieces together in her head, drawing correct or wrongheaded conclusions.

the disjointedness that characterizes the earlier parts of the film and makes Ruth’s misanthropy seem so grounded and relatable shifts into more banal and predictable material by the end.

On Netflix.
posted by sylvanshine (8 comments total) 5 users marked this as a favorite
As a Macon Blair fan from Jeremy Saulnier's movies, this was one of my favorites from last year...It was like a much more comedic Blue Ruin.
posted by doctornecessiter at 10:39 AM on January 4, 2018

This was a top 20 of 2017 film for me. I love it when I can experience a film with no preconceptions and this was one of those. Great characters and that odd tone. Disjointed is right, and also sedately manic, if that is a thing. More please.
posted by mumblelard at 8:25 AM on January 5, 2018 [2 favorites]

Oh how much I loved watching Elijah Wood drop kick an old man. I went into this blind and was amazed, what a great film. The end becomes so surprisingly dark so fast.

It was also this movie that made me realize I loved Wood. I was tepid on him until this and then the whole Dirk Gently thing. Wooo!
posted by Literaryhero at 8:16 PM on January 5, 2018 [1 favorite]

I enjoyed this but felt disappointed that the ending took a stereotypically violent turn. It occurred to me later that this could be a meta-textual comment: the movie itself becomes hostile to the viewer, who empathizes with Ruth's wish for less assholery and hopes that the movie resolves toward her desire in a straightforward way (that is, at the level of film tropes, in a less straightforward way). But maybe not!
posted by sylvanshine at 4:53 PM on January 6, 2018

It reminded me a lot of Blue Ruin (although I enjoyed this more) and also of The Big Lebowski, both in specifics - the lack of interest from the police, the beaten-up car, the ineptitude and unpredictability of the violence - and more generally in that a lot of the laughs come from how odd and self-important people are, and from the awkwardness of situations that arise when regular people are thrust into a Hollywood plot: film noir in the case of TBL and lone vigilante in this case.

Also I liked the reference to Blade Runner in the spoiler scene.
posted by chappell, ambrose at 9:30 PM on February 18, 2018

We just watched this, and Melanie Lynskey sells perfectly a weary, tired longing for things to just not suck for once that was both heartbreaking and utterly identifiable.

At 1:05 into the film we decided a more appropriate title was 'John Wicker'. I enjoyed it so much it didn't even bother me all that very much that the Firebird had Chevrolet badges on the shaker.
posted by MarchHare at 4:29 AM on November 25, 2018 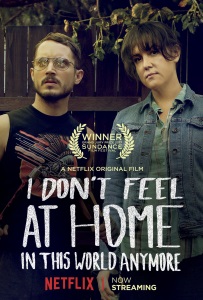