Competitive ice skater Tonya Harding rises amongst the ranks at the U.S. Figure Skating Championships, but her future in the activity is thrown into doubt when her ex-husband intervenes.
posted by phunniemee (16 comments total) 6 users marked this as a favorite
The end credits state that TH has a 7 year old son and that "she wants everyone to know that she is a good mother".
posted by brujita at 4:05 AM on January 5, 2018 [2 favorites]

I really liked this movie and thought it was funny and real and sad (and definitely left me with a "of course a man ruins a woman") but man was there a lot of domestic violence. I know that was to make it real because that's how it was, but it was a bit tough to take over and over again.

I LOVED that they included the real interviews at the end, as if to say, "SEE? We really didn't exaggerate anything! This is REALLY what happened!"
posted by knownassociate at 10:33 AM on January 5, 2018 [7 favorites]

I wish that this would get to my town already. It tickles me that a movie with Sebastian Stan in it was written by a guy named Steven Rogers.
posted by Halloween Jack at 11:20 AM on January 5, 2018 [5 favorites]

I LOVED that they included the real interviews at the end, as if to say, "SEE? We really didn't exaggerate anything! This is REALLY what happened!"

And ending with the video of the Nationals where she landed the triple axel, seeing her skate with so much joy right after we saw the courtroom scene where she's banned for life from skating was gut-wrenching. Really great timing and use of real life footage.

Saw it last night and still struggling with all the crap that this story churned up in me. Such a great set of performances. Robbie and Janney especally are phenomenal. So good.

But OMG, the feels. The anger and frustration. First of all, she MADE IT TO THE OLYMPICS!! Just THINK how amazing that is, all by itself?? She MADE IT. She COMPETED AT THE HIGHEST LEVEL. From those origins, she reached the absolute pinnacle for figure skaters. And for her, with arguably zero resources, support system, connections, etc., the road was automatically harder then for just about anyone else I can think of at that time and in that cohort.

I am so frustrated by the fact that after seeing this movie, I still have very little idea how that managed to happen. I suppose the film's purpose was to focus more on the shitstorm cloud that never seemed to recede from her life, obliterating any ray of light that may have shown her a different path. We must accept that in a way, a miracle occurred. That is sort of set aside, and instead we see her shitting all over her own glory, over and over and over. How could she have been so blind to her own potential? How did this happen?? How did someone so gifted, so strong and capable of so much, be simultaneously so damaged that she had no other course but self-destruction? How did she remain so absolutely trapped in her own circumstances, incapable of getting out of her own way, entrenched in the patterns of dysfunction?

I want to blame someone. In post-viewing conversations, I found myself angriest at her coaches. How they allowed her to self-destruct on such a massive scale just feels criminal. Since there were no other adults seemingly present to offer anything remotely resembling a positive image, I can only look to them and say, WHYYY? WHYYY? with Kerrigan-esque despair. How did her coaches not see, not know, not do more to redirect her? Hell, if for no other reason, for profit! Coaching an Olympic champion would have brought so much return on investment. Yet no one seemed to grasp the enormity of what was slipping away before their eyes.

This article sums up my frustrations quite nicely.
posted by I_Love_Bananas at 5:50 AM on January 6, 2018 [1 favorite]

I thought it was fascinating in terms of gender. Tonya is portrayed as mildly butch by nature, with her taste for trucks and guns and hard rock, her short haircut as a teenager, her unapologetic physical power and exhilaration in anything athletic. (The ZZ Top skate is the most uncomplicatedly happy we see her in the film; all her other momets of happiness are laced with anxiety.) A lot of this overlaps with her working-class identity -- a high femme presentation is expensive and impractical; it's a marker of privilege she doesn't have -- but other working-class women, like Nancy and Tonya's mother, aren't shown to share it.

And there's something about that butch side, more than anything else about Tonya, that horrifies the skating establishment. To me, there's huge homophobic subtext to the insane standard they hold her to. She doesn't even need to be queer to catch the brunt of it; it's America, it's 1992, and the worst thing her mother can say about her skating is still "you looked like a bull dyke." And I think a lot of what brings Tonya down is being made to act contrary to her nature. In this film's very dark (but historically accurate) vision, the quickest way to prove you're feminine is to walk into a situation where you know you'll be abused and gaslit.

I thought that the storyline around the attack was the least interesting part of the film, especially as I really didn't find Shawn as hilarious as the writer and director though I would. It also has a curious vagueness about how complicit Tonya was, mostly because she's so out of focus during that part of the story. The idea is that she's so focused on her triumph that she's not really paying attention to whatever penny-ante shit Jeff and Shawn are up to, but since this part of the movie is all about the dudes, we end up losing sight of her personality at a crucial moment.

Like I_Love_Bananas, I also wondered why her coaches never really helped her. Diane is such an ambiguous figure. She seems to respect and love Tonya in her way -- at least, she keeps coming back -- but she's also a chilly, emotionally impenetrable, ineffectual WASP. I don't understand why she picks Tonya back up after having a skate thrown at her head, and I also don't understand why she seems to see Tonya only as a body with no inner life. (On the one hand, she boasts of Tonya's strength and the severity of her training regimen, and on the other hand, "pear is a shape" is actually a really cruel joke, especially on Tonya, who's only "out of shape" by Olympic standards.)

One more thing: this film is set in Portland, but extremely not filmed in Portland. I'm sure this was a pure budget thing, but it's still a missed opportunity to portray the scrappy, hedonistic Portland of the 90s -- Fugitives and Refugees Portland -- which evoked such radically different images than it does today.
posted by thesmallmachine at 11:13 AM on January 6, 2018 [12 favorites]

Just saw it tonight, and I am a former PNWerner now living in Atlanta. My immediate reaction was "that's not Oregon, that's HERE!" and sure enough, it was. One of the rink scenes was filmed at the skating rink in Duluth I visited a few months ago.

This movie left the theatres in Cincinnati before I had a chance to watch it and I am so bummed about it. When it comes out on Netflix or whatever, I'll be all over it.
posted by cooker girl at 12:20 PM on January 8, 2018

thesmallmachine, your comments about Toyna being a butch skater reminded me of this RadioLab story. Women's figure skating is so gendered (and somewhat racist), that it's sad that the "athletic" style is so derided.
posted by Hermeowne Grangepurr at 2:32 PM on January 9, 2018 [3 favorites]

I saw this tonight and thought it was fantastic, albeit incredibly depressing and hard to watch due to the violence. It really is an amazing examination of class in America, of fame/celebrity, and of the media. Allison Janney was mesmerizing, and Margot Robbie was really good. I understand the need for some levity in all that, even though it made the film feel somewhat uneven. Still, I loved when the characters broke the fourth wall in a few places - just enough to be effective as a tool, without becoming annoying.

I agree with it feeling sort of unfocused once we began with "the incident" story, and I felt that Tonya was put to the side a bit for a good while, which was unfortunate. Still really good, even if I wonder to myself about the ethics of exploiting her terrible early life and circumstances that lead to her having to give up something she worked so hard for her entire life...
posted by gemmy at 9:03 PM on January 18, 2018

Just saw this this past weekend, and loved it. I could buy that her coach was focused on making Tonya a better (and more acceptable-to-the-skating-world) skater, and just didn't have the personal skills to make her a better person, or heal the wounds that her mother inflicted on her. That runs counter to decades of coach-athlete movie cliches, in which the mentor neatly and completely fixes their protege, but this isn't that kind of movie, and I'm pretty sure that that's not the way it usually works IRL. In general, the movie is pretty brutal, not just in showing the reality of domestic violence--not just its pervasiveness, but how reflexively Jeff and Tonya's mother hit her--but in detailing how people react to Tonya's class signifiers and shut out her attempts to rise above her situation. One of the movie's last images is one of its most powerful: the contrast between Tonya pirouetting on the ice and her spinning after having been clobbered during boxing (the only sport that she can get into following her conviction) so hard that her mouthpiece flies out.

Speaking of Harding's mother, Allison Janney was astonishing in this; Tonya's mother's final betrayal subverts another movie cliche. (Janney's Wikipedia entry states that she had serious ambitions of being a figure skater herself.) I also liked how they portrayed Shawn; I don't think that he was meant to be hilarious at all--I do think that he was ridiculous, in a /r/iamverybadass sort of way, but that's not really the same thing--but, in his own way, utterly convinced that this was what a person had to do to get ahead in the world.
posted by Halloween Jack at 10:34 AM on January 30, 2018 [4 favorites]

I watched it last night and love it pretty much without reservation.
posted by Ivan Fyodorovich at 10:01 AM on March 7, 2018 [1 favorite]

I'm not sure if I could stand to watch it again, but this was a really good movie. Allison Janney was perfect, and Frances McDormand should mail her Oscar to Margot Robbie and apologize to America.
posted by fleacircus at 9:51 PM on April 4, 2018 [2 favorites]

This one had an amazing format: competing narratives told through recreated interviews and dramatic scenes in a way that shatters the fourth wall and deconstructs the very concept of truth. It can be entertaining, even funny, but was hard to watch because Tonya Harding was so abused growing up by her monster of a mother, and then abused by her first husband. Whether she's telling the truth about not knowing about the attack on Nancy Kerrigan or otherwise, it's clear that Tonya never stood much chance of being a functional young adult, and that at age 23, abuse was simply a part of her life and a tool to be used if necessary.
posted by orange swan at 7:21 PM on April 21, 2019 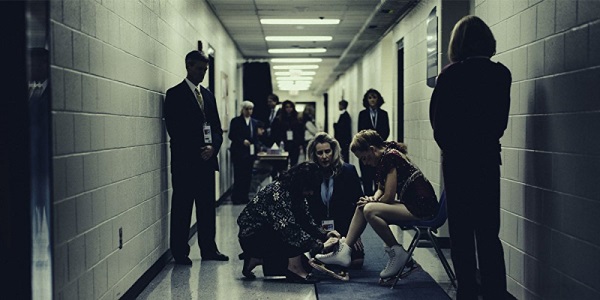