A rich high school student tries to boost a new pupil's popularity, but reckons without affairs of the heart getting in the way.


Roger Ebert: "Clueless" is a smart and funny movie, and the characters are in on the joke. Cher (Alicia Silverstone), who lives in a mansion and looks like Cybill Shepherd, is capable of lines like, "Why learn to park when every place you go has a valet?" But she puts a little satirical spin on them. She is one of the most totally self-absorbed characters in a movie since the heroes of "Wayne's World," and yet she isn't a victim, and we get the idea she will grow up tough and clever, like her dad (Dan Hedaya).

NYTimes: "Clueless" is best enjoyed as an extended fashion show (kudos to the costume designer, Mona May) peppered with amusing one-liners, most of which Ms. Silverstone gets to deliver. On television violence: "There's no point in taking it out of shows that need it for entertainment value!" On Billie Holiday: "I love him!" On why she's a virgin: "You see how picky I am about my shoes, and they only go on my feet!"

Rolling Stone: OK, the plot is inane, Val-gal-speak is a cliché, and Heckerling was more incisive covering similar hormonal ground 13 years ago in Fast Times at Ridgemont High. But there's still wicked good fun to be had. Silverstone is a winner. And so is the movie, which also functions as a lunatic update of Emma, the 1816 Jane Austen novel. Go ahead, laugh. Heckerling wants us in on the joke. Emma would scarcely spy a gentleman entering her father's parlor and exclaim, as Cher does, "Oh, he's such a Baldwin."

Parade of Oral Histories: Vanity Fair. Vulture. Telegraph. NYPost.
posted by MoonOrb (33 comments total) 6 users marked this as a favorite
the most devastating insult in cinematic history
posted by roger ackroyd at 9:09 PM on February 5, 2018 [10 favorites]

I know a guy who first started programming because he wanted to recreate her clothing-picker from the opening montage.
posted by brainwane at 4:39 AM on February 6, 2018 [6 favorites]

Then I went to college and dated a guy, and showed him this movie (the media center at the library had it so we could watch it for free), and he didn't care for it much, and I was disappointed and thought it must not be as great as I remembered.

And then I showed it to my spouse in 2015 and IT'S STILL GREAT. Hilarious tight writing, great memorable visuals, a main character who genuinely gets more likable and struggles and changes over the course of the film, and, as my spouse points out, "the only real villain is dispatched pretty early on, allowing for plenty of conflict that's not predicated on someone being the antagonist". I am VINDICATED and also I married the right person.

He also noted: "One weird thing: the cell phone jokes don't land anymore. You can see them happening, you know they are jokes, but everyone has cell phones now so the jokes don't do anything. They're like the ghosts of jokes."
posted by brainwane at 4:45 AM on February 6, 2018 [32 favorites]

I love that turn of phrase, thank you both for that. :)

I don't remember this movie very well, but I do remember really enjoying it at the time, much more than I expected to.
posted by mordax at 7:46 AM on February 6, 2018 [1 favorite]

I am convinced that Paul Rudd has some Dorian Grey shit happening. Or he's in really tight with Cher's surgeon.
posted by elsietheeel at 8:00 AM on February 6, 2018 [7 favorites]

To this day, whenever I pass a stop sign with perhaps too liberal a rolling stop, I think "I totally paused!"

Anyway, this is a good movie and we can only wonder why Rolling Stone felt it needed to compare with Fast Times at Ridgmont High, a movie that came out 13 years earlier and which shares very little in terms of style, tone, or theme with Clueless.
posted by skewed at 8:48 AM on February 6, 2018 [17 favorites]

I love this movie. The story isn't very interesting to me and not something I'd normally care much for, but there are real character arcs and the acting is fantastic all around. It's an art to make caricatures of types feel so much like real people in 97 minutes.

Well, they share writer and director Amy Heckerling and are teen movies (or at least movies about teens)
posted by Clinging to the Wreckage at 11:20 AM on February 6, 2018 [3 favorites]

Well, they share writer and director Amy Heckerling and are teen movies (or at least movies about teens)

Ah, I feel dumb now, I didn't know Heckerling directed Fast Times, I thought it was just Rolling Stone shilling for Cameron Crowe or something.
posted by skewed at 11:58 AM on February 6, 2018

I complained to all of my friends that "I totally paused!" when I got a ticket for, er, only pausing at a stop sign.

Also, I still say "the loadies hang out on the grassy knoll over there" when I'm describing certain campus orgs.
posted by TwoStride at 2:15 PM on February 6, 2018 [1 favorite]

Hot take: I like Fast Times a lot more.

My take on FTaRH is it was much more designed for teen guys. Even leaving aside the gratuitous teenage nudity, the film was dominated by the guys.

Maybe the doctor couldn't help the sexism, but still I prefer Clueless.
posted by happyroach at 4:07 PM on February 6, 2018 [4 favorites]

This is one of those movies that I was firmly meh on at the time (I was too much of an edgy cynic to admit how good it was) but now acknowledge to have probably been one of the best movies of the decade. I should watch it again sometime.
posted by tobascodagama at 4:27 PM on February 6, 2018 [2 favorites]

Intellectually I understand that there are only 13 years between Fast Times & Clueless but emotionally, plus realizing Clueless is 23 years old... oh god. Oh god. I am mortal. So very mortal.
posted by Alvy Ampersand at 5:37 PM on February 6, 2018 [7 favorites]

I liked this movie a lot, too. When I taught Ideas in TV and Film to college kids, there was an assignment where they had an original and a remake to watch and then compare -- Clueless and Emma were one of the choices students had -- and for those who took it -- Clueless beat Emma every time...
posted by Alexandra Kitty at 6:47 PM on February 6, 2018 [1 favorite]

The most devastating insult was so personal to me at the time I watched it...I still in some ways feel like it's the best insult ever.

I can't even get into how obsessed I've been with this movie over the years.

You know what's a relevant joke these days? "If we get to the kitchen, rearrange some things, we can certainly party with the Haitians." That sums up my feelings on immigration in a nutshell.
posted by jenfullmoon at 7:05 PM on February 6, 2018 [6 favorites]

I still in some ways feel like it's the best insult ever.

The line is perfection as written, but then Brittany Murphy cocks that eyebrow and it cuts like a dagger coated in poison, and Alicia Silverstone's lip trembles as she realizes she's just been mortally wounded by someone she considered a charity case.

One of my favorites is Elton's, "My foot hurts, can I go to the nurse?" I find myself wanting to say that all the time and then realizing most people won't know what the hell I'm talking about.
posted by something something at 6:59 AM on February 7, 2018

Cher's haphazard comparison of the Haitian refugee crisis to her guests that refused to RSVP is the best. "And in conclusion, may I please remind you that it does not say "RSVP" on the Statue of Liberty. Thank you very much."

I watched this movie over and over when it first came out; I remember my tenth birthday party being a sleepover and we watched this like six times. As a kid, I loved the colorful outfits and the unusual slang. As an adult, I remember just how well it's written, and how it's still funny and I really, really love this movie.
posted by PearlRose at 7:12 AM on February 7, 2018 [5 favorites]

GUYS THE SOUNDTRACK TO CLUELESS IS AMAZEBALLS. How are we not talking about it? I still have "Need You Around" by the Smoking Popes and "Change" by the Lightning Seeds in constant rotation.
posted by hanov3r at 10:31 AM on February 7, 2018 [5 favorites]

Too bad the soundtrack doesn't have any Billie Holiday. I love him!
posted by mochapickle at 11:51 AM on February 7, 2018 [3 favorites]

I like Fast Times well enough, its a good movie. I wouldn't compare it to Clueless which I unabashedly loved when it came out and have rewatched it with continuing joy year after year.

I find Fast Times depressing and I just can't enjoy it that much in the end. Clueless is just a joy to watch and that matter more to me overall.
posted by Julnyes at 6:36 PM on February 19, 2018

Which is okay! But I just find Clueless...fine. Okay enough. Whereas Fast Times is honestly one of my top ten favorite movies of all time.
posted by Chrysostom at 7:26 PM on February 19, 2018

Chrysostom, you should absolutely post a Fast Times discussion thread so I can tell you how much more I like Clueless there.
posted by roger ackroyd at 3:39 PM on February 20, 2018 [4 favorites]

There's more than two different kinds of teen movies, and Clueless and Fast Times are not the same kind of teen movie.
posted by rhizome at 5:50 PM on February 20, 2018 [1 favorite]

Inevitable: The Remake Machine has come for Clueless
posted by roger ackroyd at 9:49 PM on October 25, 2018

I just take it for granted that Hollywood and TV have run out of ideas. It seems to make the good stuff stand out.
posted by rhizome at 10:22 PM on October 25, 2018 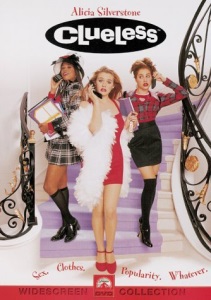