Mary Shelley reveals the main characters of her novel survived: Dr. Frankenstein (goaded by an even madder scientist) builds his monster a mate.


As previously announced here, the MeFi Horror Club bonus pick for this week (in honor of Halloween/October) is James Whale's 1935 masterpiece Bride of Frankenstein.
posted by DirtyOldTown (5 comments total) 1 user marked this as a favorite
This might be the best example ever of "Sequel That Outdoes the Original."
posted by DirtyOldTown at 3:09 PM on October 10, 2014 [1 favorite]

The Baron has decided to mate the monster,
to breed him perhaps,
in the interests of pure science, his only god

So he goes up into his laboratory
which he has built in the tower of the castle
to be as near the interplanetary forces as possible,
and puts together the prettiest monster-woman you ever saw
with a body like a pinup girl and hardly any stitching at all
where he sewed on the head of a raped and murdered beauty queen.
He sets his liquids burping, and coils blinking and buzzing,
and waits for an electric storm to send through the equipment
the spark vital for life.

The storm breaks over the castle and the equipment really goes crazy
like a kitchen full of modern appliances as the lightning juice starts oozing
right into that pretty corpse.

He goes to get the monster
so he will be right there when she opens her eyes
for she might fall in love with the first thing she sees
as ducklings do.
That monster is already straining at his chains and slurping, ready to go right to it:
He has been well prepared for coupling by his pinching leering keeper who’s been saying for weeks, “Ya going to get a little nookie, kid.”
or “How do you go for some poontang, baby?”
All the evil in him is focused on this one thing now
as he is led into her very presence.

She awakens slowly, she bats her eyes
she gets up out of the equipment,
and finally she stands in all her seamed glory
a monster princess with a hairdo like a fright wig,
lightning flashes in the background
like a halo and a wedding veil,
like a photographer snapping pictures of great moments.

She stands and stares with her electric eyes,
beginning to understand that in this life too
she was just another body to be raped.

The monster is ready to go:
He roars with joy at the sight of her,
so they let him loose and he goes right for those knockers.
And she starts screaming to break your heart
and you realize that she was just born:
In spite of her big tits she was just a baby.

But her instincts are right – rather death than that green slobber:
She jumps off the parapet.
And then the monster's sex drive goes wild.
Thwarted, it turns to violence, demonstrating sublimation crudely;
and he wrecks the lab, those burping acids in buzzing coils,
overturning the control panel so the equipment goes off like a bomb,
and the stone castle crumbles and crashes in the storm
destroying them all… perhaps.

Perhaps somehow the Baron got out of the wreckage of his dreams
with his evil intact, if not his good looks,
and more wicked than ever went on with his thrilling career.
And perhaps even the monster lived
to roam the earth, his desire still ungratified;
and lovers out walking in shadowy and deserted places will see his shape loom up over them, their doom –
and the children sleeping in their beds will wake up in the dark night screaming
as his hideous body grabs them.
-- Edward Field

This might be the best example ever of "Sequel That Outdoes the Original."

Yes, indeed. This movie is such a delightful thing in every aspect. This really was Whale at his best. The amazing thing is that it's only 75 minutes long, yet packs so much fun entertainment.

In many ways, Bride was a stronger influence on Mel Brooks' Young Frankenstein than was Frankenstein, especially from a visual design aspect.
posted by Thorzdad at 3:30 PM on October 11, 2014 [1 favorite]

Wonderful! I haven't seen this since my early teens. Karloff with the immortal words "we belong dead," Lanchester so lovely and terrifying in her precious minutes of screen time. And she also plays Mary Shelley in the intro (I didn't remember that scene at all. Possible it was edited out for broadcast all these years ago, or I just forgot it).
posted by computech_apolloniajames at 6:57 PM on October 17, 2014 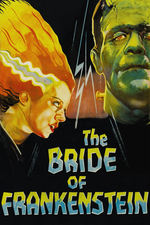