As corruption grows in 1950s LA, three policemen - one strait-laced, one brutal, and one sleazy - investigate a series of murders with their own brand of justice.


Consequence of Sound: The life of a detective is never easy in 1950s noir, and the central trio of gumshoes in L.A. Confidential form one of the great holy trinities in ensemble film history. Tracing the trajectory of a police takeover of a lucrative Hollywood heroin empire, the task falls to brutish Bud White (Russell Crowe), suave celebrity detective Jack Vincennes (Kevin Spacey), and bookish, principled Edmund Exley (Guy Pearce) to stop it. This is not to say they’re all shiny golden boys; Bud is the poster boy for anger management issues, Ed is such a humorless stick in the mud about procedure and principle that all the other cops hate him, and Jack is too busy schmoozing with movie stars to pay attention to all the crime happening around him.

Rolling Stone: Scruples don't play in this urban jungle. L.A. Confidential deserves a place with the best crime films when it hangs tough in the style of Raymond Chandler and Dashiell Hammett. The individual cop, represented by Bud, and the department, represented by Ed, are equally corruptible: the cop as vigilante, the department as fascist state. Ellroy, the self-proclaimed "demon dog of American fiction," isn't interested in those Pollyannas who want to bring order to the seductive danger of chaos. As a wise movie cop once said, "Forget it, Jake; it's Chinatown."

NYTimes: The essential questions throughout this captivating film are whether and how anyone will rise above its quagmire. Since the answer must be yes (some genre rules are inviolable), ''L.A. Confidential'' leavens its vice with affecting tenderness. Bud White (Russell Crowe) may be a thug and bruiser, but he melts at the white satin vision of Lynn Bracken (Kim Basinger), a call girl whose face, hair, costumes and bungalow are meant to conjure thoughts of Veronica Lake. The film's valid idea of good old-fashioned steam heat is to have Lynn lead Bud into her real bedroom -- the one filled with mementoes of her native Arizona -- at dawn.

Roger Ebert: "L.A. Confidential" is described as film noir, and so it is, but it is more: Unusually for a crime film, it deals with the psychology of the characters, for example in the interplay between the two men who are both in love with Basinger's hooker. It contains all the elements of police action, but in a sharply clipped, more economical style; the action exists not for itself but to provide an arena for the personalities. The dialogue is lovely; not the semiparody of a lot of film noir, but the words of serious people trying to reveal or conceal themselves. And when all of the threads are pulled together at the end, you really have to marvel at the way there was a plot after all, and it all makes sense, and it was all right there waiting for someone to discover it.

WaPo: In fact redemption is the central theme of "L.A. Confidential," for each of the main characters will perform a beastly act and each will face his own evil and recoil from it and try to atone, thereby becoming heroic. In a city named for its angels, they and they alone seem to believe in Heaven and hope for a ticket to it.

One thing they know from the get-go: They are not there yet and that's because of where they are. What the film gets best of all is the sense of L.A. as a paradise lost, a land of milk, honey and sex turned rancid in the sun, as the harshly held Puritan disciplines of the East yield to the temptations of the city's nighttime fragrances.

L.A. Confidential understands that men don’t always respond to evil with good and that the question of whom society regards as heroes isn’t always a clear cut as it seems. But while Brian Helgeland’s screenplay, like so much neo-noir, seeks to expose the seedy underbelly of the glamour of Los Angeles in the 1950s, the film’s shiny Hollywood surfaces too frequently weaken its intentions. The filmmaking is competent and engaging but middlebrow, and Dante Spinotti’s cinematography is striking but too clean to achieve Chinatown-level subversion. And the film’s conclusion, with Bud showing up in an uplifting last-minute reveal, is so falsely sunny that it very nearly undermines the film’s up-to-that-point admirable sense of darkness and moral confusion.

How L.A. Confidential Redefines Film Noir by Reversing the Tropes of the Genre

What conventions does “L.A. Confidential” use to create its neo-noir style?

Michael Dinner of Justified tapped to direct CBS TV pilot of L.A Confidential drama
posted by MoonOrb (15 comments total) 4 users marked this as a favorite
I've generally loved this movie in a perverse sort of way (Rollo Tomassi, "You look better than Veronica Lake," et al), but.... Kevin Spacey. Sigh. It's a shame. I tried to read the book and could not take the author's writing style at all, but the movie was really well done.
posted by jenfullmoon at 6:41 PM on February 10, 2018 [1 favorite]

I loved this movie and watched it a few times when and shortly after it was released. That's twenty years ago, though, so I wonder what my reaction to it would be now.
posted by Ivan Fyodorovich at 7:55 PM on February 10, 2018 [2 favorites]

James Cromwell, who was the heartwarming farmer in Babe does a grand Dudley Smith here, lad.
posted by valkane at 8:06 PM on February 10, 2018 [5 favorites]

It's interesting how Russell Crowe became much more of a star than Guy Pearce.
posted by Chrysostom at 8:08 PM on February 10, 2018 [2 favorites]

Oh hi I built up my starter wardrobe by carefully watching this movie and taking notes - so much so that I was able to wear a near complete copy of Jack Vinnences' outfit to the NY Hail, Caesar premiere

The bar he leaves the big tip in, the Follies' is still there - that's not a real Hitschfeild on the wall it's a blow-up of one of his Broadway crowd scenes. Place still looks like that, it;s attached to the theater that originally hosted the Oscars. Only bar i;ve been at that had my dad's music on the jukebox.

Sadly the old place where Lana Turner gets confronted is Gone, like last year too. Shame.

I had the most immense crush on Bud White as a teenager which in retrospect explains a lot.
posted by The Whelk at 9:40 PM on February 10, 2018 [4 favorites]

It's interesting how Russell Crowe became much more of a star than Guy Pearce.

It baffles me, honestly. I do not think he is a good actor. But the one-two punch of Gladiator & Beautiful Mind did it for him; Pearce was doing dogs like The Time Machine meanwhile.
posted by smoke at 11:39 PM on February 10, 2018

I loved this movie in high school, so much so that I had the poster on my bedroom wall (not the Kim Basinger one, the one showing the end of the climactic scene with Guy Pearce silhouetted by headlights). Watching it ten years later with my wife, I was so relieved to see that it still holds up, because so many of my favorites from that era (Magnolia, American Beauty) really, really haven't.
posted by firechicago at 5:58 AM on February 11, 2018

This is one of those cases where I love the book so much that I can never love the film. The book is so dense that a complete adaptation would have been 8 hours or so. Obviously they didn't want to do that, or provoke Disney, or get an NC17, so they excised the part of the plot that ties a lot of things together and restructured what was left to make some of the same people guilty. Yet they also rewrote Vincennes almost from the ground up--not sure why--and he was my favorite character in the book. When they made this film I was already well familiar with Pearce, Spacey, and Crowe, so I was pretty excited about it because of the casting, yet the result felt like weak sauce. The filmmakers had kept everything that was nostalgic and scraped away a great deal of crime, mystery, and misanthropy.
posted by heatvision at 6:47 AM on February 11, 2018 [1 favorite]

I saw this five times in the theater (back when there were dollar second-run theaters, but still, that’s like twelve full hours). The storytelling is masterful in its economy.

Agreed that it’s really nothing like the book. The LA Quartet novels are their own thing.
posted by infinitewindow at 9:17 PM on February 11, 2018 [1 favorite]

Haven't watched it in a few years, though. I might have to buy a used DVD of it, as I'm assuming that's the only way to ensure that not a penny of royalties finds its way into Spacey's pockets.
posted by the return of the thin white sock at 12:49 PM on February 12, 2018

So the stars of this film are three male detectives, and a prostitute. Hm.

This movie really holds up after twenty years. I remember being dazzled by it when it first came out. I've been revisiting this month a lot of movies from the 90s, many of which I didn't like at the time but now have mellowed on a little bit; others that I've always held dear. Watching each of these characters struggle to break free from their own particular form of corruption is so compelling.
posted by MoonOrb at 8:51 PM on February 24, 2018 [1 favorite] 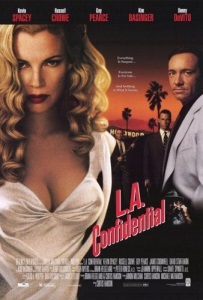