THE SPIRIT OF 99 VIEWING CLUB - An out of work puppeteer takes a menial job in a office on the 7 1/2 floor only to find a door leading inside actor John Malkovich's head, then things get strange.


DID EBERT LIKE IT? "What an endlessly inventive movie this is! Charlie Kaufman, the writer of "Being John Malkovich," supplies a stream of dazzling inventions, twists and wicked paradoxes."

It got a Criterion Collection release! Trailer

THE BEST: Oh god everything. The dead on satire of office culture, the use of language as a weapon of humiliation, Cameron Diaz's frumped up sexually confused frizz-bomb, the realistic, cruddy environments to compliment the super-high concept oddness.

THE WORST: The ending has always bugged me and the last act as a tone shift that doesn't really go anywhere after being so manic and high-spirited right out of the gate.

Malkovich? Malkovich.
posted by The Whelk (24 comments total) 9 users marked this as a favorite
The ending has always bugged me and the last act as a tone shift that doesn't really go anywhere after being so manic and high-spirited right out of the gate.

I am a Cusack fangirl, but I'm strangely not a fan of the romantic-comedy Cusack. He has his "gotta do this for the money" side that makes things like "American Sweethearts" and "Con Air" and "2012" and such. But that side is just there to support his freak side - the side that Tweets curses against FOX news wishing a "satanic death cult" upon them, or makes movies about the military-industrial complex and quite possibly does street graffiti art.

That is the John Cusack that got bored one day and asked his agent to "send me the most twisted, unproduceable script anyone's ever sent you", and they sent him this and he immediately called them back and said "if anyone EVER tries making this, I want you to get me cast in this or I WILL FIRE YOU." He was a big enough draw back in 1999 that I am pretty confident that his interest helped insure this got made in the first place.

Catherine Keener should be the biggest star in America.
posted by roger ackroyd at 10:10 AM on October 14, 2014 [7 favorites]

I really love the office scenes in this movie - they're both a dead on satire of office culture ( a series of easy but useless tests and trials for no reason) while also being surreal and mannered and strange. Everybody is behaving in completely incomprehensible ways that they assume is normal and Cusak's character is left completely out of sea.
posted by The Whelk at 10:40 AM on October 14, 2014 [1 favorite]

Also the not so subtle shifting identity theme sprinkled throughout the movie, both in the obvious "hijacking another person" stuff and puppets (I love that there is a widely successful but "commercial sell-out." rival puppeteer) and in the little bits like how no one can remember WHICH movie Malkovich has been in (and keeps saying he was in a "jewel thief movie", he hadn't been in one) and in the sectary who gets everyone's name wrong and refuses to budge about it. You are what we say you are.
posted by The Whelk at 10:53 AM on October 14, 2014 [3 favorites]

Charlie Kaufman has managed to find numerous fascinating ways to relate his own neuroses and perspectives to modern culture via his scripts, but none more insane and left-field than the 7&½th floor portal into John Malkovich's consciousness. Being John Malcovich is filled to the brim with WTF, and deliciously watch-able.

Keener's Sardonic Lax-y Dream Girl is devastating. I also enjoy her return to a similar character in Hamlet 2.

I recall being blown away with the difference between Cameron Diaz' titular character in 1998's humongous hit There's Something About Mary and her portrayal of Lotte Schwartz here. For this 17 year-old boy, finding out she wasn't just legs for days and a pouty smile was a revelation.

This is also the film that got me to go back and watch all of Spike Jonze's music videos. His first feature, it felt like a logical extension of the weirdness of California and Praise You and The Sweater Song. He has continued to make challenging and provoking film (and music vids) in the most satisfying way.
posted by carsonb at 10:57 AM on October 14, 2014 [2 favorites]

Which was apparently a real thing that happened! someone threw a beer can from thier car while filming and they dubbed the line in after
posted by The Whelk at 5:33 PM on October 14, 2014

I guess my education in the humanities was somewhat lacking, but I was pretty surprised to discover that Heloise and Abelard were like, a real thing years after seeing this movie.
posted by LionIndex at 7:48 PM on October 14, 2014 [1 favorite]

Yeah this is a delightful film, as essentially all Kaufman films are. I love that films like this exist, something so wonderfully odd, yet also quite human and moving, with some things to say. I also really enjoyed Synecdoche New York.
posted by Cannon Fodder at 12:17 AM on October 15, 2014

This is one of those few perfect movies. One of the best parts is how it is bizarre without being winky, incoherent, or even surreal. It is not dreamlike - it is simply a series of bizarre events, unfolding in an engaging way. Its universe has its own whole reality. Nothing exists to only symbolize something else - it simply is.

I actually found a couple of "behind the scenes" videos from their filming last night; rather unlike any other "behind the scenes" video I'd ever seen before. And the shots in question seem kind of random and haphazard. But if you want to see how they got the POV shots for Malkovich, see Cameron Diaz drape herself in toilet paper, hear John Cusack speak with a bizarre British accent about "crawling through a vaginal portal" or see an entire cast get into a food fight at craft services (twice), then this is your chance.

Oh - and part 2 also seems to imply that the "guy throwing the beer can at Malkovich's head was improvised" thing is a myth. (It actually is in the original script, which further implies that this was a myth.)
posted by EmpressCallipygos at 7:33 AM on October 15, 2014

LionIndex: I guess my education in the humanities was somewhat lacking, but I was pretty surprised to discover that Heloise and Abelard were like, a real thing years after seeing this movie.

Then perhaps you'll want to see this | movie.

Closer to the source, you might want to read Abelard's Historia Calamitatum (The Story of My Misfortunes).

He doesn't pull any punches.

I think the way I found out about Abelard was a portion of Historia was excerpted in Lapham's Quarterly (I presume the Eros issue), so I've at least seen part of it.
posted by LionIndex at 12:45 PM on October 15, 2014

Maxine (Keener) to Craig (Cusack): "You play with dolls."

ON REWATCH THE BIIGGEST THING THIS THAT CHARLIE SHEEN IN RIGHT THERE DOING DRUGS AND SUGGESTING JOHN MALKOVITCH TAKE CHARGE OF THESE LESBIAN WITCHES
posted by The Whelk at 7:48 PM on October 15, 2014 [1 favorite]

This is one of my favorite films of all time. Like, in my top five. I think probably the other four are all considered critically as film classics. (I mean, I don't actually have a list in my head, just a vague constellation...)

I really feel like Kaufman and Jonze strongly complement each other in this film and that's part of what makes it so nearly perfect -- their collaboration worked better here than it did for Adaptation (which was very good, but lacks the je ne sais quoi of this film).

I wasn't sure what I thought about Jonze as a filmmaker in the auteur sense until Her, which has caused me to revise my estimation of him upward quite a bit. Both Jonze and Kaufman clearly have very strong artistic vision and both are somewhat outside of the mainstream, so they could have combined in a way that emphasized their worst habits. Kaufman is the one who most strongly needs a moderating influence (and I say that as a dedicated fan of his). I adore Synecdoche, New York but I think that BJM has precisely the best amount of Kaufmanness in it and my sense is that Jonze is partly responsible for this.

For what it's worth, I like the ending a lot. I think it's extremely poignant, in a strange sort of vicious way. Craig is narcissistic and entitled in exactly the way that smart, nerdy, straight white men so often are and this character is so often the hero these days and I feel certain that much of the audience identifies with him. I think he's partly a stand-in for Kaufman -- one against which Kaufman expresses a profound self-loathing.

Lotte is maybe the only character in the film that isn't monstrous in some respects and even she is seduced into doing awful things for the sake of her need to self-actualize. Everyone else but Craig are mostly just awful people in very mundane ways -- Maxine is kind of mildly sociopathic, content to see most other people as a means to her ends but, despite herself, she stumbles into some better parts of herself via Lotte. But Craig is tragically and profoundly awful, and this is mostly because he has absolutely no self-awareness of what's wrong with him. He thinks he's a good guy; he has a lot of investment in this idea that he's a well-intended guy who the world doesn't understand but, really, the truth is that he hardly even sees other people in the world, they're all just characters in the Drama About Craig.

And I think that Kaufman-the-artist is also punishing Craig for not finding the strength to realize his talent as himself, but rather using the crutch of Malkovich.

All this is really off the top of my head -- for all the times I've seen this film (has to be at least six or seven) and have discussed it with others, I really haven't thought that much about these themes. I've mostly just sort of marveled at the film's construction and what I'd even call the joy of watching it. But I think that there's a whole lot of stuff there; it's not just Kaufman playing with his pet ideas (although there's a great deal of pleasure in that, too).
posted by Ivan Fyodorovich at 9:25 PM on October 17, 2014 [3 favorites]

I always like how Kaufman's collbators put in shitty real world details, we're so used to designed sets and living spaces in movies that it's shocking when people are living in what looks like an actual crappy apartment which are usually cluttered and badly lit. There's always a lot of creative people living in terrible apartments in these movies and I like that.

As for Lotte, Diaz just vanishes into the role in a way I've never seen her do since. She's just so sad and needy and lovesick and under about fifty pounds of frizzy hair - all those animals! Those housecoats! Poor Lotte.
posted by The Whelk at 7:24 AM on October 18, 2014

Oh - and part 2 also seems to imply that the "guy throwing the beer can at Malkovich's head was improvised" thing is a myth. (It actually is in the original script, which further implies that this was a myth.)

It was removed from the shooting script, unbalancing karma until a drunken stranger with a good arm restored it.
posted by zippy at 4:33 PM on June 2, 2015 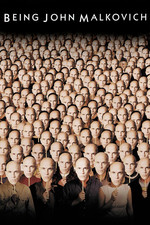