A New England couple's college-aged son dates an older woman who has two small children and an unwelcome ex-husband.


Roger Ebert: "In the Bedroom" only slowly reveals its real subject in a story that has a shocking reversal at the end of the first act, and then looks more deeply than we could have guessed into the lives of its characters. At first, it seems to be about a summer romance. At the end, it's about revenge--not just to atone for a wound, but to prove a point. The film involves love and violence, and even some thriller elements, but it is not about those things. It is about two people so trapped in opposition that one of them must break.

NYTimes: This perfectly observed, wrenchingly acted drama about a middle-class New England couple coping with the murder of their 21-year-old son cuts to the quick. Its portrait of grief, rage, jealousy, flawed justice and revenge in a Maine lobstering town zeroes in on its characters' tragic flaws, yet refuses to condemn them. It reminds us that, like it or not, the capacity to commit a crime of passion is part of being human.

AV Club: Moving forward with patient, almost stately deliberation, In The Bedroom examines the violence at the core of these characters' lives, and the toxic ways it manifests itself. As rich as the film is in psychological detail, Field also has a novelist's talent for evoking the community at large, with its underlying class divisions and flavorful rhythms, brilliantly paced to the sound of Boston Red Sox rebroadcasts on the radio. It should come as no surprise that Field proves to be a precise and sensitive actor's director, or that his veteran ensemble cast, particularly Wilkinson, is superb. But in negotiating a story with so many treacherous twists and turns, he gets all the slippery intangibles right, maintaining credibility while gathering his effects for a powerful climactic payoff. Outsized in ambition and accomplishment, In The Bedroom announces a major new talent.

Slant: Unlike the similarly themed The Son’s Room (also a Miramax release), Todd Field’s In the Bedroom tackles grief with nary a hint of weepy melodrama when a relatively austere Maine couple is forced to cope with sudden death of their son. Dr. Matt Fowler (Tom Wilkinson) and his wife Ruth (Sissy Spacek) are a seemingly upper-middle-class couple. Field’s use of language is as sophisticated as his visceral direction—doorways and windows become emotional barriers between lives while a swing set and a copy of Highlights magazine become fabulous signifiers of lost youths. Their son Frank (Nick Stahl) carries on with a local unmarried woman, Natalie (Marisa Tomei), whose husband, Richard Strout (William Mapother), exploits his wealthy family name to his advantage.

Much of In the Bedroom’s success comes from Field’s trust in the audience’s ability to grasp the sublimity of Spacek and Wilkinson’s candid performances. Ruth doesn’t have to say a word to evoke her character’s sadness when her friend Katie (Celia Weston) discusses the joy of having grandchildren; for Ruth, there won’t be any grandchildren. Field dares to make pain a selfish thing. Ruth’s gaze suggests a woman less afflicted by death than she is resentful of a husband whose budding medical career prevented them from having more children. More interesting is how Richard’s parole and potential light sentence becomes an attack on Matt and Ruth’s sanity. Richard must be punished, not so much because of his crime but because the Fowlers should never have to bump into him around town.

Rolling Stone: Time passes but doesn't heal wounds; revenge, or at least the thought of it, does. When Richard is paroled and looks primed to get off with a light sentence, Ruth and Matt find it painful to live with the world, or each other. Their home is suddenly a battlefield of wounding accusations that have festered unexpressed for too long. If you want to see a master class in acting, watch Spacek and Wilkinson go at each other in scenes that shake the foundation of what appeared to be the solid marriage of Ruth and Matt. No wonder they both shared the only acting prize given at this year's Sundance Film Festival. Spacek hasn't had a role this substantial in years, and she cuts to the heart with the same blunt honesty she brought to Carrie, Badlands and her Oscar-winning role in Coal Miner's Daughter. Wilkinson, a British actor (The Full Monty) with a knack for getting under the skin of his American character, creates a galvanizing portrait of a decent man pushed beyond his limits.

Slate: The entire middle section of In the Bedroom has little in the way of meaningful talk—and that's the point. Words could temper nothing, relieve nothing. The language is in the images, in the progression of shots during a funeral, in the breeze (an echo of the earliest motif) that makes a lace curtain billow, in the aura of futility that surrounds household chores, in the chatter of a television in the abyss. During the last hour, I could barely breathe; I swore at the screen; I called for blood; I cried for vigilantism to restore the natural order; and I sat in shock when the natural order was and wasn't restored. That's the thing about a masterpiece like In the Bedroom. It isn't over when you leave the theater. It isn't over when you brood on it for days. It's just always going to be there, in the air, in the bedroom.


Why the academy fell for In the Bedroom
posted by MoonOrb
« Older High Maintenance: Steve (Seaso...   |  Ash vs Evil Dead: Baby Proof... Newer » 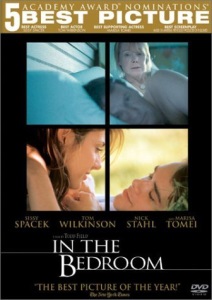