Roland talks his way through a long, icy night.


Published in 2012, eight years after completion of the Dark Tower cycle, The Wind Through the Keyhole is set between volume four, Wizard and Glassm and volume five, Wolves of the Calla. With the ka-tet holed up to take shelter from an ice storm -- the starkblast -- Roland passes the time by telling a tale from his youth: the hunt of a Skin-Man.

The aspects of the series that worked right up until the end help make Wind Through The Keyhole so satisfying. Throughout the novel, characters comment on the importance of stories, how they provide richness and value to life, and at its best, the Dark Tower books are a celebration of this idea. [...] Roland’s world, with its mixture of post-apocalyptic leavings and half-understood sorcery, is a potent medium for tales, as evocative and memorable as Roland himself. Where the series failed to live up to its potential, that potential remains undimmed, and there remains gold to be found, for the patient and the open-minded.

This new entry doesn’t require much digging to yield its treasures. There’s a purity to the story-within-a-story-within-a-story structure, and by the time a much younger past version of Roland gets around to telling a frightened boy his own favorite childhood tale, King is doing what he does best, spinning a yarn full of deep feeling and unexpected delights. Where other books of the Dark Tower sequence got bogged down by a vain effort to make sense of it all, Wind Through The Keyhole has a light, easy touch, buoyed by the knowledge that all the machinations of plot and ka (the gunslinger’s word for “fate,” a pretty way of saying, “This happens because the writer needed it so”) have been laid to rest.

I was just thinking fondly of this book the other day. It was a pleasure to revisit the characters when it first came out, and reread in order, it fit surprisingly well with Wizard and Glass as the transition between 1-3 and 5-7.

That said, the name of the town they're in is also a racial slur (and I think a fairly well-known one?), which is used maybe once or twice as the town name and never remarked upon, and why King picked that word specifically always baffled me.
posted by jameaterblues at 8:37 PM on March 26, 2018

Yeah, it's jarring and a bit ham-fisted. Charitably, I think maybe it's King reinforcing that although the worlds are alike, they're also different in significant ways? Eddie and Roland have different reactions to it:

They came to a broken piece of signboard lying on the path. Eddie picked it up and read the faded remains of a single word. “It sums up Mid-World perfectly,” he said. “Mysterious yet strangely hilarious.” He turned toward them with the piece of wood held at chest level. What it said, in large, uneven letters, was GOOK.

“A gook is a deep well,” Roland said. “Common law says any traveler may drink from it without let or penalty.” 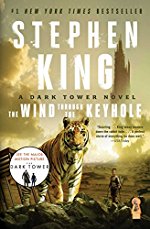