Rosa Ostreech, a pseudonym for the novel’s beautiful but self-conscious narrator, carries around a trilingual edition of Aristotle’s Metaphysics, struggles with her thesis on violence and culture, sleeps with a bourgeois former guerrilla, and pursues her elderly professor with a highly charged blend of eroticism and desperation. Elsewhere on campus, Pabst and Kamtchowsky tour the underground scene of Buenos Aires, dabbling in ketamine, group sex, video games, and hacking. And in Africa in 1917, a Dutch anthropologist named Johan van Vliet begins work on a theory that explains human consciousness and civilization by reference to our early primate ancestors—animals, who, in the process of becoming human, spent thousands of years as prey.
posted by DirtyOldTown (2 comments total)
Somewhere out there is a reader steeped in Argentinian sociopolitical references who enjoys scatalogical sex humor, postmodern pisstakes on academia, satiric references to the likes of BF Skinner and Bertrand Russell and will be tickled endlessly by long stretches of a pompous academic woman's diary addressed to Chairman Mao (masked as "Moo" ...as in "Dear Moo...") in which she purports to take on the bourgeoisie but is mostly complaining about boy troubles... but I am not that audience. I am giving myself permission not to finish this one.
posted by DirtyOldTown at 8:30 AM on March 29, 2018 [1 favorite]

For unknowable reasons, there have been several Argentinian political novels translated in 2017 so I feel more informed than I ever have. And I still can't do it.
posted by tofu_crouton at 3:35 AM on March 30, 2018 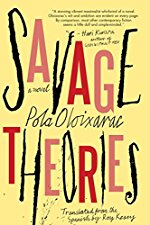