Mindy thinks she's met the man of her dreams after he writes a description of their encounter in a New York newspaper. After a failed attempt at meeting each other, Mindy once again spots whom she believes to be her mystery man but is left with an even bigger reveal. (Wikipedia summary, more detailed summaries below the fold.) Season two finale.


For those not familiar with the show, or if you missed the episode, The AV Club sums up The Mindy Project as a whole, and this episode, quite well:

At the end of its second season, The Mindy Project has become one of those shows that inspires strong reactions on either side, and very few in the middle. If you scout out Mindy Project reviews (wait, I’ve done it for you!), you’ll find both total pans (“The Mindy Project fails at everything it attempts”) and complete raves (“Why only an idiot would miss out on TV’s funniest comedy”). I fall closer to the latter on the scale, but I understand the former.

The Mindy Project finishes its second season tonight with an episode called "Danny and Mindy," which finds our central lovebirds going through a bunch of rom-com staples.

but it looks like Margaret Lyons didn't watch the episode before writing the article, because she goes on to write

But I hope this is the end of the Danny/Mindy romance, because when the show comes back next season, I want it to be a whole new show. TMP should scrap everything except Mindy Kaling (obviously), Chris Messina [Dr. Danny Castellano], and Ike Barinholtz [Nurse Morgan Tookers], and it should start all over again — keep those actors, but everything else, including the premise, needs to go.

Some of those hopes will be realized as castmember Zoe Jarman, who plays the naive receptionist Betsy Putch, will not be returning as a series regular in Season 3.
posted by filthy light thief (19 comments total) 1 user marked this as a favorite
I'm not sure whether the characters (particularly Mindy) got less annoying or whether I just got used to them (her), but this show didn't really "click" for me until about halfway through the first season. By now, though, man... they hit it every week.

I'm leaning toward agreeing with the "slim it down" argument -- Kaling and Barinholtz are fucking brilliant, and everyone else is sufficient, but the cast is way too bloated (that English doctor hasn't had a decent subplot all damn year).
posted by Etrigan at 10:20 AM on May 23, 2014

I think the addition of Adam Pally took this show from Eh to LOL ALL THE TIME. The romantic comedy stuff, feh, who cares its a comedy. The important thing is jokes and this show, like new girl, brings em on a regular basis despite the sometimes insufferable out of touchness of the characters.
posted by Potomac Avenue at 10:28 AM on May 23, 2014

Yeah, they cut back Ed Weeks (Dr. Jeremy Reed) after he got fat and lose weight. Adam Pally (Peter Prentice) has grown on me, but the weird Morgan/Tamra side story seems superfluous.

I don't agree with rebooting the whole show, because at that point you might as well have a new show with a new title, or a spin-off (in the style of Major Crimes spinning off of The Closer, even with the majority of the characters remaining).
posted by filthy light thief at 10:33 AM on May 23, 2014

I found myself pretty surprised how moved I was by the romantic parts of the finale -- like all the sudden these characters were much more important to me than I realized.

But the good episodes and the parts that work just prove to me how hard it is to make a good show because it doesn't always work so well. This is a show created by extremely talented, funny people who have more than proven themselves in other venues and you get a lot of that here. But sometimes it just falls flat. The part of me that will always support the creative folks makes me want to say that it's probably all the fault of network executive interference, but I bet it's just that creating good TV is hard, and creating good light romantic comedy on a weekly basis is maybe harder than other genres -- surely harder than it is ever given credit for.
posted by MCMikeNamara at 1:03 PM on May 23, 2014 [1 favorite]

I have to admit that, even though the show has its rough elements and episodes, it just works so well for me. The chemistry between Danny and Mindy is fabulous (Chris Messina for all the awards) and Peter is also pretty great. I love both the romance and the comedy, and I have no idea how, but it became the show I looked forward to most every week starting about a third of the way through S2. There were some great episodes this season, and this one's pastiche nature/various hromcom omages with a twist managed to make it awesome without feeling like a copy.

However, I have to lodge the formal complaint that Mindy Kaling is stealing my life. I'm a Princeton and Columbia-educated woman who eats too much, I'm good at my job but don't have the homemaking stuff together at all, I play the alto saxophone, I basically own a cheaper version of Mindy's wardrobe, and my fiance, who is a lovable curmudgeon with strong opinions, is named Daniel Ca(redacted)o. I'm lucky I'm Professor L instead of Dr. L. Okay, I guess I know why it became my favourite show. (And that's not even counting the time I was approached to work in ethnically-specific porn, but like Mindy, I declined, because it was not even close to three hundo thundo.)
posted by ilana at 2:10 PM on May 23, 2014 [4 favorites]

Mindy! Mindy! I can't comment critically on TMP despite many flaws a because I love it so much. I would happily watch Mindy and Danny arguing over dinner for an hour. I love Mindy's ability to deny reality right up until she has to and then she squares up and Deals With Things.

Also I want a RomCom-themed tour of NYC to be a real thing because that would be awesome
posted by viggorlijah at 5:50 PM on May 23, 2014 [1 favorite]

I also appreciated that Danny wasn't going to go to the top of the tower, that he had given up. He does give up, and the show didn't change him into a better person or more hopeful.

I hope in the next season they bring back Danny's ex wife and more midwife hatespats. Watching Danny explode is delightful. I could lose the receptionists, but not Morgan! Morgan's devotion to Dr L and his weird skills are delightful.
posted by viggorlijah at 5:56 PM on May 23, 2014 [1 favorite]

(Chris Messina for all the awards)

This is Messina's second role where he completely won me over by being such a great dancer. I've watched his Aaliyah-Secret Santa dance for Mindy at least ten times.

I hope in the next season they bring back Danny's ex wife and more midwife hatespats.

I love the midwives so much. I doubt the Duplass brothers are available all that often, but I would take as much of them as they could fit in.
posted by gladly at 6:41 PM on May 23, 2014 [1 favorite]

Hi, all, this is my second Mefi incarnation but I'm completely new to Fanfare. I saw Matt's post about Mefi's recent troubles and figured I'd return, a little more grown up, maybe.

This show, "Louie," and "Mad Men" give me some hope for creative humanity (and intelligent audiences) just about every week. I love that Danny's character is shown to love Mindy despite (or even because of) her foibles - that scene a couple of weeks ago on the train where he was helping her not to strangle herself with her earbuds and scarf? I was dying. And Adam Pally for the win - the bro best friend you never knew you needed.

Overall, I love that a dark-skinned Indian woman has had a great comedy show named after her FOR TWO SEASONS on a major network. Agree with everyone about the unevenness but it doesn't matter: like Danny, I love Mindy, misfires and all. And I think writer/producer Charlie Grandy is one of the show's secret weapons: by the way, he's the son of Fred Grandy (former Congressperson and also former "Gopher" on "The Love Boat"!)
posted by Sheydem-tants at 2:18 PM on May 24, 2014 [1 favorite]

Sheydem-tants: I love that Danny's character is shown to love Mindy despite (or even because of) her foibles

I think Danny shifted from liking her despite her foibles to loving her because of them, with his offering to let people come and tell them their personal issues, because he was a good listener or whatnot. If I recall correctly, he berated Mindy at first for unloading on him, but at this point in the show, when she's not there to tell him about the important and petty things in her life, he realizes he misses that interaction.
posted by filthy light thief at 8:08 AM on May 25, 2014

I love this show so hard. I didn't even sample it till New Girl went off the rails, and now I've been on a Hulu rampage catching up. Danny and Mindy forever, totally.
posted by BlahLaLa at 3:15 PM on May 26, 2014

I'm really worried that this is the show blowing its wad after taking fucking FOREVER to get on its feet. I still feel like it has huge flaws, and I worry that basing the whole thing around a will they/won't they romance that ends on "they will" so early in the series' run is a recipe for disaster.

I adore Mindy Kaling and really wish she'd spent another year or so developing a great show rather than the half-baked whatever the fuck that the show has been until about halfway through this season. Like... It's just named after me! And... the main character has my name! And my mom's job! Which despite being the setting we will never actually talk about in any detail! And there are... I dunno.... some... other people maybe? Parks & Rec started rough but at least there was a premise.

Etrigan: I love Adam Pally, but I want him back on Happy Endings. Shut up -- they haven't cancelled it, it's just on hiatus.

I wanted to thank you for bringing this show to my attention. With Coach, er Damon Wayans Jr. and Adam Pally and some decent writing, I'm happy to have this show as my "mood lightener" after watching something serious, like In The Flesh or Major Crimes. Even if Pally is type cast as something of a "bro," he's the right blend of cocky, adorable, and uncertain to make him a better man than Bo, the roller-blading wedding crasher in Happy Endings.
posted by filthy light thief at 7:13 AM on June 24, 2014

I fell behind on this show and binged 7 episodes today just to get to this amazing finale. As someone who watches You've Got Mail every time I have a cold, this episode hit my schmoopy spot HARD.

I do miss that badass moment though from season 1, ep 1 when Mindy's world was falling apart, and she ties herself into her scrubs and gets her job DONE. I know it's still in the show opening, but I hope more of that "and she's a great doctor, too" gets written in next year.
posted by kimberussell at 5:01 PM on July 1, 2014 [2 favorites]

FLT, you'll be happy to know that HE creator David Caspe and Casey Wilson and the criminally underaccomplished Ken Marino are teaming up for Marry Me this fall on NBC. 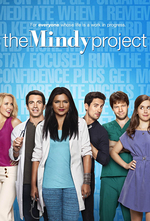