A coach with a checkered past and a local drunk train a small town high school basketball team to become a top contender for the championship.


NYTimes: Who could resist a tiny Middle Western town where the barber shop is called Rooster's and the game of basketball is foremost on every mind? Probably no one, and the quaintly innocent ''Hoosiers'' is irresistible in much the same way. This film's very lack of surprise and sophistication accounts for a lot of its considerable charm. As written by Angelo Pizzo, directed by David Anspaugh, imbued with a convincingly old-fashioned look and acted in a friendly, forthright manner, ''Hoosiers'' seems about as sweetly unself-conscious as a film can be.

WaPo: "Hoosiers" re-creates the organic nature of an actual community -- you feel the basketball in relation to these people's lives, feel the people's relation to the land. The movie is beautifully cast (by Ken Carlson) -- the kids seem like real basketball players, the townspeople seem like they've been there all their lives. It's gorgeously photographed (by Fred Murphy), not merely for pictorial effect, but to create a sense of rootedness. And it's marvelously (and innovatively) scored (by composer Jerry Goldsmith), who weaves together electronics with symphonic effects to create a sense of the rhythmic energy of basketball within a traditional setting.

"Hoosiers" is told from a nostalgic distance, and those allergic to corniness might best be advised to stay home. But what do you expect in a movie about Indiana? Corn is what they make there.

LATimes: But watching the twilights, the bleakness, the Edward Hopper lighting of its nighttime scenes, you begin to understand what sports must mean to people during these isolate winters, in towns like Cedar Knob and Dugger, Oolitic and Logootee. Fred Murphy, who photographed "Hoosiers," also did the brutishly beautiful "Heartland," set in the western plains states. In his hands weather becomes another character, another force in the story.

The mainspring of the action is Hackman--driving, disciplining, molding a bunch of unmotivated, resentful boys into something resembling a team. With his dry, mirthless laugh in testy encounters with Hershey and his pugnacity on the court, he makes the coach volatile, perhaps dangerous--and absolutely compelling. (Every role of Hackman's seems to be his best work to date, but this performance is a high-water mark.)

Roger Ebert: "Hoosiers" has the broad over-all structure of most sports movies: It begins with the problem of a losing team, introduces the new coach, continues with the obligatory training sequences and personality clashes, arrives at the darkest hour and then heads toward triumph.

This story structure is almost as sacred to Hollywood as basketball is to Indiana.

What makes "Hoosiers" special is not its story, however, but its details and its characters. Angelo Pizzo, who wrote the original screenplay, knows small-town sports. He knows all about high school politics and how the school board and the parents' groups always think they know more about basketball than the coach does. He knows about gossip, scandal and vengeance. And he knows a lot about human nature.

All of his knowledge, however, would be pointless without Hackman's great performance at the center of this movie. Hackman is gifted at combining likability with complexity - two qualities that usually don't go together in the movies. He projects all of the single-mindedness of any good coach, but then he contains other dimensions, and we learn about the scandal in his past that led him to this one-horse town. David Anspaugh's direction is good at suggesting Hackman's complexity without belaboring it.

Basketball Diary: Hoosiers Behind the Scenes

On the 30th Anniversary of Hoosiers, the Movie’s Director Recalls What a Pain Gene Hackman Was

The real story behind the movie Hoosiers, told by the leading scorer

‘Hoosiers’ filmmakers scold Mike Pence: If you like our movie then embody its values

Streaming on HBO
posted by MoonOrb (6 comments total) 4 users marked this as a favorite
(Disclaimer: I am in the finals crowd, since it was shot at my college.) I really like this movie for a lot of reasons. Yes, I hear the detractors. But I don't care. Part of my affection for it is timelessness... It could have been made in any era, with maybe a Henry Fonda-esque leading man. The supporting cast is all very realistic and the locations are perfect. Thanks for creating such a wonderfully detailed post about what is clearly a problematic film.
posted by I_Love_Bananas at 6:28 AM on April 3, 2018 [1 favorite]

When I think about sports movies I love, I recognize that the movie is never really *about* the sport; but the sports angle is the metaphor, the accessible platform from which the real story can be told. These are movies like Hoosiers, Bull Durham, A League of Their Own, Breaking Away and Field of Dreams. For me, these all share that same quality of timelessness, which is part of why I feel they hold up so well and continue to resonate with me as life ambles onward. They are enduring, vs. the slapstick-y, frat-humor sports genre, which I have always found myself far less attached to; films such as the Major League franchise, Happy Gilmore, Dodge Ball, Caddyshack etc. Yes, these have their place but none of them make me stop what I'm doing and sit down and watch when I walk through the living room on a Sunday afternoon and find them on my TV.

I cry every time Moonlight Graham steps across that gravel line. I glow inside every time Dave Stohler passes that big rig on that old Bloomington two-lane. And I can breathe in the Indiana evening as Coach Dale and Myra Fleener stumble through their awkward courtship across those farm fields. I can smell that gym-floor varnish. And this sequence (Hopper especially) makes my heart sing for joy, every time.
posted by I_Love_Bananas at 7:12 AM on April 3, 2018 [3 favorites]

I have something of the opposite reaction to the movie, finding the heavy coating of nostalgia rather oppressive as it attempts to hide the more unpleasant odor of white panic the story relies on. Hoosiers works awfully hard at trying to show white men as the truly disadvantaged up against a new world order, where the powerhouse minority dominated team represents a move away from "traditional values" those plucky white underdogs embody. Any time popular culture tries to make the audience look back to some better days, you'd better ask better for who and what is it they're asking me to yearn for.

Hoosiers isn't the only movie that does this, Rocky sort of set the standard and acted as the standard bearer for the transition from the adventurous uncertainty of the seventies to the regressive conservatism of the eighties with its blockbuster formula driven fare. Never underestimate the desire for white audiences to want to see themselves as oppressed in need of a hero to restore the true order.
posted by gusottertrout at 9:24 AM on April 3, 2018 [4 favorites]

Having grown-up in Indiana, I tend to cringe whenever Hoosiers shows up on tv. The institutional boner people here have for high school basketball in general, and for the “golden age” of the 50s and 60s in particular is pretty effin’ stupefying. I mean, if you go to smaller towns, it would not be out of the ordinary to see some old guy walking around, still wearing his letterman’s jacket from 1956. Right now, there is a political ad running for a particularly odious republican tool where he equates his coaching his son’s school basketball team (undefeated, of course) with his ability to “get things done” in Washington.

About that Milan team...When I was in high school, our basketball coach was on that famous Milan team. We curious minds on the school newspaper decided to look up his record that season, just because we could. Turned out that, yes, he was on the team, but he saw exactly zero minutes on-court the entire season. Our coach held down the bench.
posted by Thorzdad at 2:51 PM on April 3, 2018 [2 favorites]

Certainly not to take away from your affection for the film, I_Love_Bananas, but as someone who grew up in Bloomington my feelings for the film are, oh, not positive, overall. Hopper's character in particular irritates me, and the May-November romance feels totally shoehorned in there.

I do, very much, have affection for Breaking Away, however. It's not a realistic portrayal of the 1970s in Bloomington, but it balances nostalgia with the genuinely weird shit that comes with growing up in Bton in ways that make it persuasive and beautiful.

It should be noted that Steve Tesich, who wrote Breaking Away, and Angelo Pizzo, who wrote Hoosiers, are or were both Bloomington locals. Tesich died in 1996 at age 53 (a year older than I am now), born in Yugoslavia, raised in the Chicago area, and came to Bloomington with his family in the early 1960s or late 1950s. That makes me wonder if his family has anything to do with Janko's Little Zagreb!

Pizzo grew up in Bloomington and graduated IU in 1971. Pizzo's father was Dr. Anthony Pizzo, a medical doctor who became a prominent local politician and City Councilman, who died at 93 in 2015.
posted by mwhybark at 2:49 PM on April 8, 2018 [1 favorite] 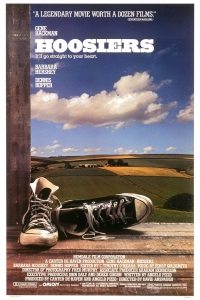