A minor league baseball player has to spend thirty million dollars in thirty days in order to inherit three hundred million dollars. There's a catch however: he's not allowed to tell anyone about the deal.


[Trailer] [IMDB] [Wikipedia] [Rotten Tomatoes] [TV Tropes (all versions)] [BBFC] [Urban Dictionary] Brewster’s Millions still works brilliantly as a comedy today, and is well on its way to becoming a timeless classic, a morality tale wrapped up in a whole lot of mirth. MyReviewer If the system of rewards and punishments in this universe worked the way it should, Brewster's Millions would become only a moderate success. It's not awful. It's a perfunctory comedy, a refurbished used car in which this most seriously gifted of contemporary comic performers revs himself down to the speed of a vehicle that moves at about one-third of the rate of his intelligence. New York Times

Bonus At The Movies clip
posted by Ten Cold Hot Dogs (5 comments total) 3 users marked this as a favorite
This was a favorite of mine as a kid that I haven't seen in years and I'm hoping it holds up.
posted by Pope Guilty at 12:29 PM on April 7, 2018 [2 favorites]

The two things I remember most about this movie: the baseball field with a train track running through the outfield, and the appearance of Torchy's Bar, which puts Brewster's Millions in the same universe as 48 Hours (both movies are from the same director).
posted by hanov3r at 9:07 AM on April 11, 2018 [2 favorites]

I just remember that he uses the Inverted Jenny stamp to mail something.
posted by Chrysostom at 10:15 AM on April 11, 2018 [3 favorites] 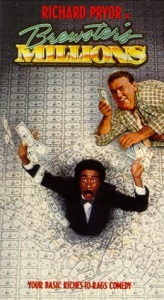