Documentary-style account of a nuclear holocaust and its effect on the working class city of Sheffield, England, and the eventual long-term effects of nuclear war on civilization.


Empire: Forget The Exorcist, The Shining, and those consistent inclusions on the top ten scariest films of all time - this British work of (technically) science fiction teaches an unforgettable lesson in true horror.

Threads is most successful by its merciless refusal of sentimentality - every second is played for realism; this is a documentary of a nightmare, as we are taken, via a young unmarried couple, through a nuclear strike on Sheffield circa 1984, and beyond.

AV Club: Threads is primarily remembered for its relentlessly cruel depiction of the aftermath—a grim, hopeless trudge through broken streets littered with grinning corpses and smoldering dead cats, trembling women holding the black, charred remains of tiny babies. As the text dispassionately informs us, burying the bodies is deemed to be impractical, so they’re just left to the rats. Cholera and other diseases run rampant, while radiation-burned victims slop through blood and pus at the local hospital, where the best that doctors can do is saw their limbs off as they bite down on rags.

Streaming at the Internet Archive

Threads: the film that frightened me most

The Nuclear War Movie That Traumatized a Generation Is Back
posted by MoonOrb (13 comments total) 9 users marked this as a favorite
For some reason, I thought it would be a good idea to own this on DVD. I suspect I may watch it maybe once more in my lifetime. It is a deeply upsetting film.
posted by Happy Dave at 3:12 PM on April 7, 2018 [1 favorite]

I grew up in Sheffield and was a teenager in 1984. Threads was terrifying and I can remember whole scenes vividly even after all this time.
posted by Heloise9 at 3:44 PM on April 7, 2018 [3 favorites]

Again—as in The Day After, as in Miracle Mile—there is the portrayal of people living in hapless ignorance, watching these various warning signs unfold but not knowing what to do about it, so mostly they just put it out of their minds. (AV Club)

Oh God. If only this didn't feel so...prescient.

I've never seen Threads, but I did see The Day After when it came out. I was not yet 10 years old, and it terrified me. I can only imagine how traumatized I'd have been by Threads. As it was, I used to lie on my bed at night and think about nuclear war a lot.

I think Trump and Kim Jong Un and all those trigger (button?) happy dictators with nuclear arsenals should have to watch this with their eyelids propped open, Clockwork Orange style.
posted by hurdy gurdy girl at 4:41 PM on April 7, 2018 [4 favorites]

I went to university in Sheffield and was amazed at how much of the city I recognized from the film, having only watched it once before.

Found out the other week that the director as first wanted to use Coronation St actors but then later decided it would be better with relative unknowns
posted by fearfulsymmetry at 4:01 AM on April 8, 2018 [1 favorite]

I didn't know Threads had been remastered and released on Blu-Ray recently. I bought a copy so I could put it on my shelf and lend it out to friends, and most importantly never watch it again because the last time I did so it kept me up for an entire week. Threads is horrifying and bleak, and I think it's the most important movie I've ever seen (as you might guess if you look through my post history and find the many times I've posted about it on the Blue). The fact that it seems more plausible than ever frightens me.
posted by chrominance at 5:27 AM on April 8, 2018 [2 favorites]

I am surprised that it took this long for this to be posted to Fanfare, given that we seem to talk about it on the blue roughly every two weeks.
posted by Chrysostom at 8:32 PM on April 8, 2018 [6 favorites]

we seem to talk about it on the blue roughly every two weeks.

Some of us were scarred, kid.

...We were talking about this at an NYC meetup recently and someone had the idea that we should get Netflix to stream it as some kind of special event just to get more people to see it - because I firmly believe that people seeing it will have a political impact.

48-year-old-me is getting alarmed that people are forgetting about how dangerous nuclear war would be. 17-year-old-me didn't go through 10 years of night terrors over this for nothing.
posted by EmpressCallipygos at 8:02 AM on April 9, 2018 [6 favorites]

I remember stumbling across “Threads” on PBS back in the 1980s. I’d already seen “The Day After”, which was like “The Flintstones” by comparison. I’ve watched it once since then. I’m not sure what to think about the Blu Ray version. I’m not sure I can do it, but my kids need to see it so that they understand how serious politics and voting are.
posted by wintermind at 6:21 PM on April 19, 2018 [1 favorite]

I have no idea how I managed to go so long without seeing this. I'm a Gen X-er with a fascination for British kitchen sink drama, horror movies, and end of the world stories. This has me written all over it.
posted by DirtyOldTown at 7:14 PM on July 12, 2019

I have always wondered what a Ken Loach horror movie would look like and now I feel like I sort of know.
posted by DirtyOldTown at 7:29 AM on July 13, 2019

I watched this after the recent FPP about The Day After, which is like a kids version of a nuclear apocalypse compared to Threads.

Really good! Very gripping. I tend to do things while movies/tv play in the background, but this one had me glued the whole time. I count myself lucky that I saw this in my mid-30s and not as a child. The hospital I think is what really got me. I also liked that this movie has alot of facts interspersed in it that gives it a realistic picture.
posted by LizBoBiz at 12:55 AM on July 15, 2020

Now available on the free (ad-supported) Tubi streaming service, sitting cheek by jowl with about a million really bad "B" science fiction movies. It's like finding an exquisite corpse in a trash bin.
posted by Mogur at 1:17 PM on March 27, 2021 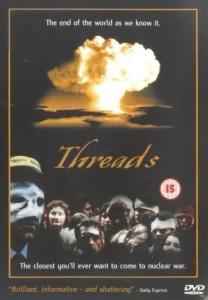