“Women ought to be free - as free as we are,” he declared, making a discovery of which he was too irritated to measure the terrific consequences.


The Age of Innocence tells the story of an upper-class couple’s impending marriage, and the introduction of the bride’s scandal-plagued cousin, whose presence threatens their happiness. It is Edith Wharton’s twelfth novel, initially serialized in four parts in the Pictorial Review magazine in 1920. It won the 1921 Pulitzer Prize for Fiction, making Wharton the first woman to win the prize.

THE CLAREMONT REVIEW: The Genius of Old New York (2007)
“Polite society would soon come to regard it as tragic that Ellen Olenska and Newland Archer did not run away together. How could they defer to social mores in a world where, as one of Wharton's characters observes, ‘the new adultery was unfaithfulness to self’?”

NEW YORK MAGAZINE: The Greatest Novel (2011)
“It builds itself, obsessively, out of all the essential New York themes. The necessary (but often terrifying) seesawing between change and stasis. The constant drama of taste and class; the connoisseurship of gossip. (One man, preparing to dispense a particularly juicy bit, gives “a faint sip, as if he had been tasting invisible Madeira.”) The shiny lure of fantasy versus the sharp hook of reality. The giant shell game of phoniness and authenticity. The existential strain of distinction versus assimilation—that yearning to be free (one of Wharton’s keywords) but also to belong to a social tribe (another of her keywords). The agonizing, paradoxical struggle to feel like a special individual in a city of millions.”

TA-NEHISI COATES: The Age of Awesome (2011)
“Wharton presents to us a deeply flawed world. But whereas a lesser writer would have stopped there, Wharton shows us how an honorable person, totally apprised of those flaws, might die for that world nonetheless.”

THE GUARDIAN: Puppets in a Period (1920)
“Mrs. Wharton tries her best to make the story moving, but she is dealing with dead stuff and dead people. They lived in New York in the seventies, and nothing she can do will make them come alive again.”

EDMUND WILSON: In Praise of Edith Wharton's Acerbic Pen (1938)
“Her tragic heroines and heroes are the victims of the group pressure of convention; they are passionate or imaginative spirits, hungry for emotional and intellectual experience, locked into a small closed system and destroying themselves by beating their heads against their prison or suffering a living death in resigning themselves to it.”

THE AIRSHIP: Edith Wharton on Pinterest
“But scrolling through the massive swaths of Pinterest inspiration…I was reminded of a classic literary figure who would have been alllll over Pinterest had it existed during her time: May Welland.”

MEDIUM: Everything Countess Ellen Olenska wears in ‘The Age Of Innocence’
“What can you expect of a girl who was allowed to wear black satin at her coming-out ball?”

THE GUARDIAN: Digested Classics – The Age of Innocence by Edith Wharton
“When Newland Archer opened the door at the back of the box, the curtain had just gone up on the garden scene. ‘Darn it,’ he thought. ‘I have arrived 10 seconds unfashionably early.’”
posted by roger ackroyd (4 comments total)
Overall, I prefer House of Mirth by a wide margin, but the entire opening opera sequence of this book is one of the funniest things I've ever read.
posted by He Is Only The Imposter at 12:34 PM on April 11, 2018 [2 favorites]

I've read the book countless times, and I love the movie too. There are too many memorable scenes in the book to comment on, so I'll just say the scene near the end, when the Newland Archers host a goodbye dinner for Countess Olenska, and Newland looks around and realizes that everyone present knows something is going on between him and Ellen and that they are all playing their role in a silent conspiracy to keep them apart and at the same time maintain the pretence that nothing untoward ever happened, is utterly chilling.
posted by orange swan at 2:48 PM on April 11, 2018 [2 favorites]

I was assigned this in 10th grade. I was entirely convinced the teacher had made a mistake, assigning us a book that was fun to read, rather than the heavy, dreary stuff we got the rest of the year.
posted by still_wears_a_hat at 3:25 PM on April 11, 2018 [1 favorite] 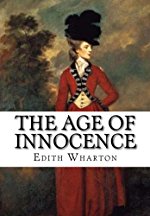