Liv is on musical theater brain courtesy of a bus crash victim. Clive and SPD gets a sexual harassment seminar. Ravi makes a sacrifice for Peyton. Blaine gets a surprise.

That was such a great episode.

It's sad that Rachel Bloom's guest spot was only in the cold open, but Zombie Rent was hilarious! It wasn't clear to me that the actor was one of the bus crash victim until Liv ate her brain and started getting theatrical. I must have missed a shot of Rachel Bloom in the morgue.

So Liv is the new renegade, and I guess her zombie brain skills are helping! I hope she saved up that theater brain for more acting! I love that Rose McIver got to use her real accent as an act. That poor security guard had no chance. Also, I'm guessing Levon (documentary camera guy / minor league hockey player) is gonna be Liv's new love interest?

I wonder how Blaine is going to deal with his father. Also, I was surprised that he didn't realize Angus wasn't in the well anymore (so much wasted brain!). It might be dark but at least you would hear him moving around in the water.

Man, Clive and Dale really needs to figure their stuff out.

Yay Ravi and Peyton!
posted by numaner (7 comments total) 1 user marked this as a favorite
I must have missed a shot of Rachel Bloom in the morgue.

After the iZombie stinger you see the file of Rachel's character before Peyton switches to next the file of the guy with the dog.
posted by Pendragon at 10:46 AM on April 11, 2018

I loved Rent and Rachel. Kind of wish Liv was a bit more insane like Rachel, but ah well.

Wow, Ravi, that's doing something for the girl you like. Damn.

I am unshocked that Blaine didn't notice his dad being missing as he showed off and monologued.

I don't understand why Blaine and Don E wouldn't see the opportunity to make even MORE money off of their restaurant by scraping plates into a blender and selling the mush to ration-dependent poor zombies.
posted by desuetude at 7:54 AM on April 18, 2018 [1 favorite] 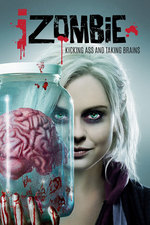