Richard Brody, New Yorker: "It’s inevitable that, in a former mining town or a dwindling farm region, some of the people who cheerfully agree to be filmed will be supporters of France’s far-right National Front, and will harbor the prejudices and hatreds that it fosters. But the politics of “Faces Places” is a trans-ideological vision of curiosity, empathy, and dignity, and it’s as much a politics of aesthetics, in which the documentation of private lives overlooked in the media and the arts breeds a feedback effect, turning the film’s subjects into public figures, subjects of art and media discussion. The sense of loss that many of these subjects confront, the sense of resistance to unwelcome change that others display, makes “Faces Places” essentially elegiac, a snatching of vitality and consolation in a race against the ultimate loss and oblivion, death."

Isabel Stevens, Sight & Sound: "Inevitably, the film is a memory trip for the 88-year-old: she revisits and remembers places and people she has photographed, and in some of the most lovely scenes recalls films and filmmakers (Godard looms large) from her past. If some of the art occasionally falls on the hokey side, the film’s piece de resistance is the pair re-enacting the Bande á part Louvre scene with Varda flying through the museum in a wheelchair.

That the tone of the film is mostly breezy and charming leaves you quite unprepared for the sharp, brutal jab of its ending – a surprise that I won’t ruin here. The only nagging sense of sadness that permeates their capers throughout is the spectre of Varda’s increasing mortality as she struggles to mount stairs or to see clearly. Her indefatigable spirit invariably triumphs, though. “I think about it a lot,” she replies when JR asks her if she is scared of death. “I’m looking forward to it.” Watching the film, you really hope it won’t be her last."

Glenn Kenny, RogerEbert: "As they make their way, sometimes merry, sometimes melancholy, a double-portrait of the artists forms. It’s very moving. Varda’s sight, which served her so well so many years, is getting dimmer. At the same time she wonders why JR always wears dark glasses. This habit, she tells him, reminds her of an old friend, Jean-Luc Godard. The resemblance sets up the film’s finale, which is puzzling, heartbreaking, but ultimately celebratory. And wobbles the line between documentary and fiction so strongly that the vibrations will linger in your heart for days afterwards."

Time is Part of the Work: An Interview with Agnes Varda (Aaron Stewart-Ahn, Bright Wall/Dark Room).

In all your work as a photographer, as a filmmaker, as an artist, what have you come to discover is the difference between media and memory?

“I don’t know, because you can see in your own life and use your memory to remember what you have. That’s not my point. My point is to get a piece of the past and bring it into my life of today.

So I don’t have the feeling that I wish to tell you my memories. I’ve done that in some of my films. What I do now, is always: make it alive now. I’ve been loving the seaside since I’m young. And it’s set where I did my first film, La Pointe Courte. By bringing the sea into a new medium, into the art world, it makes it alive. It’s not my past. I don’t care so much. I’ve been through a lot of things in my life. What I love is to make the now and here very important. That’s how I stand life.

It’s sharing what I do with people. My work is to propose, to propose the notion, to propose surprises, my view. That’s life. That’s what we call… The artist.”

Interview with Agnès Varda and JR (in French, 18m).

Trailer.
posted by sapagan (7 comments total) 2 users marked this as a favorite
I loved this. It was sweet and playful and had so many genuine human moments. I liked seeing these personal stories celebrated in such way.

I love Varda and JR's friendship. They were so sweet together and seem to have such respect and admiration for each other's talent.

I rented it digitally (I missed it in theaters -- I don't even know if it played near here) and immediately bought the Blu-ray when I finished it.
posted by darksong at 12:23 PM on April 18, 2018

This movie made me so strangely happy. I'm not usually a very emotional person, especially when watching movies, but during this one I was constantly smiling and experiencing joy; and at the end, there were actual tears in my eyes, both of joy and of sadness. As I was watching and enjoying every playfully created image, I started thinking of a 90-year-life with all its friendships, love affairs, all its amazing movies, photographs, etc., and I'm seeing this life right there on the screen - Agnès Varda being happy and tired, simultaneously creating new images and drowning in memories, herself perhaps feeling how the wind of time will carry her away - il y a trop de vent! ... And all these lives, appearing while disappearing - this is the very substance of cinema, no? Not going to say more, just that, this was, for me, a wonderful experience. Varda has always had a great manner of mixing art and life, and it's on full show here.
posted by sapagan at 3:13 PM on April 18, 2018 [1 favorite]

Thank you for reminding me that it’s out to buy!
After seeing it in the theater I wanted to watch it again, but with friends. Varda and JR have such a respectful intimacy. So playful but deeply moving.
Parts of the film come back to me, like the portrait installed on the beach that washed away in the tide.
posted by mrcrow at 3:24 PM on April 18, 2018

Another poster chiming in to say thanks for the reminder it's out on DVD/streaming! I went with a friend to go see this at a local film festival with basically no context - both of us are exceedingly ignorant about the film world in general, but I saw it in the listings and thought it sounded interesting. The house was totally packed - standing room only - and I found it absolutely delightful.
posted by btfreek at 6:19 PM on April 18, 2018

I loved this--saw it in the theatre and, like btfreek, didn't know a lot about it before I saw it. It's charming and delightful. I loved the relationship between Agnes and JR.

Of the people featured in the large murals, I was particularly intrigued by the woman who felt kind of ambivalent about being on the side of the building, but her little boys liked it because they thought their mother was the most beautiful woman ever.

I also loved the woman in the mining town who refused to move. That was very interesting and touching.
posted by hurdy gurdy girl at 12:51 AM on April 20, 2018

I went into this blind. I liked this, but sort of didn't like it. I think what I liked best is that they showed the responses even of people who were not too pleased with the art, and they let that stand as well. Towards the end I felt a tension and awkwardness between them, like a friendly dislike. I enjoyed their conversations at first, but by the end Varda is withdrawn, and JR is using her for art, showboating through the Louvre. By the end I felt kind of weary of art.

Baader-Meinhof showed up when I saw a picture float by Twitter soon after that some aggressive goats have their horns fitted with pool noodles.
posted by fleacircus at 6:52 PM on August 22, 2018

Just saw this on Netflix and was so charmed. Varda is as delightful as ever and I love JRs photography project.
posted by octothorpe at 5:40 PM on January 6, 2019 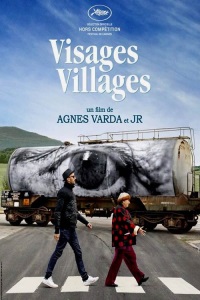