A free-spirited woman "kidnaps" a yuppie for a weekend of adventure. But the fun quickly takes a dangerous turn when her ex-convict husband shows up.


LATimes: Sixties-style free spirit transforms '80s yuppie may sound like a road a little too-well traveled these days. We've already had "After Hours" and "Down and Out in Beverly Hills" and "Desperately Seeking Susan," which might seem like a surfeit of free spirit, thank you.

But with his eye for the dark cloud behind every American silver lining; with characters who wriggle away just when you think you have them pinned down, and with music that provides both texture and subtext for his story, Demme finds haunting overtones in the somewhat old-hat situations of E. Max Frye's first screenplay.

"Something Wild" also has three first-class performances: by Daniels, who seems to have resources that his earlier roles never touched; by electrifying newcomer Ray Liotta, and by Griffith as the maddening, mysterious Lulu.

WaPo: But what makes "Something Wild" special is the way Demme enlivens it with his own quirky sensibility. With its rhythmic score by John Cale and Laurie Anderson, a title song by David Byrne, and cameo appearances by directors John Waters and John Sayles, singers "Sister Carol" East and Su Tissue, and the rock group the Feelies, "Something Wild" is avowedly an artifact of New York hip, but it never feels insular.

Because what Demme possesses, beyond a shrewd taste in the avant-garde, is a warm love of Americana that is never patronizing. Where another director would poke fun at a small-town woman named Peaches, Demme enjoys her from the vantage of her own Peachiness. He takes a running gag, in which Charlie actually addresses by name all those waitresses and gas station attendants with name tags, and makes it more than satirical, asking, why not call people by their names?

And since "Something Wild" is largely a road movie, Demme gets a kick out of the heartland, the roadside signs that say "WHOA| YOU JUST PASSED THE BEST SCRAPPLE IN PENNA. BACK 500 YDS.," the T-shirts that say "I DON'T LOVE YOU SINCE YOU ATE MY DOG," the weirdly funny cornucopia offered by a 7-Eleven store. "Something Wild" is embroidered with visual jokes and oddball characters in the background, but they're never treated as oddballs.

Demme is particularly acute in using photography and editing to give his supporting players the emotional space they need, and he can create comedy simply by the way he arranges a group of faces. Demme's geniality also makes him a whiz with actors. Daniels cuts loose as Charlie, and while he sometimes goes too far into actorish antics (particularly the self-conscious tour de force of a dance number), being a leading man liberates a jokey brio in him. Extraordinarily ordinary, Daniels turns low-key into high comedy. And he reminds you that, especially in comedy, great acting means great acting, as he works nimble improvisations off the life around him.

With her throaty warble and curvy silhouette, Griffith takes the elements of a traditional comedienne and yokes them to an untraditional woman. Her sexuality is anything but passive, and the comedy in "Something Wild" grows out of Audrey's singlemindedness of purpose, the way she resolutely unbuttons Charlie and makes him into the kind of man she likes.

With his greenish skin and beady blue gaze, Liotta is, if anything, too effective as Ray -- he's downright monstrous, and the intensity of the scare is more than "Something Wild" can stand. Demme, too, is more fascinated with Ray than he ought to be -- the last third, which is Ray's piece of the movie, drags on and on, to jarring effect. But for the first time in a long while, this is a movie that lets Demme be Demme, and the result is a film that's more than enjoyable. It's a blast.

NYTimes: Part romance, part road movie, part blood-spattered psychodrama, the film — starring Melanie Griffith as Lulu, a New York City wild child, and Jeff Daniels as Charles, her yuppie lover — was a tricky sell at the time. “It’s a schizophrenic movie,” Mr. Demme said in an interview. “A screwball comedy that turns into a film noir, as life itself does.”

Roger Ebert: But "Something Wild" is quite a movie. Demme is a master of finding the bizarre in the ordinary. Remember his "Melvin and Howard," and the topless dancer who had a cast on her arm? If he had conceived this movie as a "madcap comedy," it probably wouldn't have worked. The accomplishment of Demme and the writer, E. Max Frye, is to think their characters through before the very first scene. They know all about Charlie and Lulu, and so what happens after the meeting outside that restaurant is almost inevitable, given who they are and how they look at each other. This is one of those rare movies where the plot seems surprised at what the characters do.

How The Feelies Fueled Something Wild And Freed Jeff Daniels’ Ass

AV Club Scenic Routes: Something Wild
posted by MoonOrb (4 comments total) 6 users marked this as a favorite
I am in this movie. It was filmed partially in Quincy, FL while I was attending FSU, and features a lot of the theater department of the time. Melanie Griffith walks into a convenience store, and after she makes some noise, there is a shot of a girl at a pinball machine, and a shot of the clerk behind the counter. He is wearing a red shirt with a badger claw on it ( it's actually the shirt from the comic book The Badger that was being published at the time.)

In some ways, this movie seems like the secret origin of the Manic Pixie Dream Girl, and as the LATimes review notes, it's not as if the movie didn't have precedents even then. But the movie is bigger and better than that. Lulu/Audrey has her own motivations and her own baggage, and just as she shows up Charlie's petty larceny, her own booze lifting and fake husband peddling gets shown up by Ray's genuine thuggery. Speaking of which, Ray Liotta absolutely owns his scenes here; he's probably better known now for GoodFellas, but he's got this feral charisma here that makes him seem like Wolverine's cousin. It's also my favorite of anything that Melanie Griffith has done, ditto for Jeff Daniels.
posted by Halloween Jack at 9:37 PM on April 20, 2018 [2 favorites]

There were times when Something Wild was on heavy rotation on cable -- not early-HBO-Beastmaster-level repetition, but, frequent. This is another of those movies that is so rewarding to go into blind, because of that tonal shift when Ray Liotta enters the picture. He is absolutely terrifying, and suddenly you've gone from 'wacky hijinks' to 'oh fuck' seriousness.

(I just wish they'd found a more victimless crime to show beginning-of-the-movie-Charlie's hidden rebel side than the dine & dash; a well-off guy stealing from tip-dependent below-minimum-wage workers is just so gross.)
posted by oh yeah! at 7:39 AM on April 21, 2018 [5 favorites]

So, years and years ago, as a kid, I was on a road trip with my parents from Townsville down to Brisbane to see some family for whatever holiday. The tradition was we'd stop at Mackay one night, Rockhampton the next, and be in Brisbane by the third. Anyway, back then when you stayed at a hotel, a lot of the time they would have in house movies, which they played from a VHS in the front office and which went out across the wires to all the televisions in the hotel. There'd usually be like a dozen to choose from, none of them particularly outstanding, but as my treat for being a good little boy for many long hours in the hot car, I got to pick them.

Well, one night, at one motel, I picked this one. In the shared room with me old mum and dad. I was maybe twelve years old, thirteen? Something like that. It had Melanie Griffith and also that guy (who I remembered as being Nic Cage, for some reason)! We'd seen them in things before that were nice! The hotel guide made it sound like a fun adventure movie like Romancing the Stone!

Many Shuvs and Zuuls knew what it was to be roasted in the depths of the Slor that day, I can tell you.
posted by turbid dahlia at 3:33 PM on April 22, 2018 [4 favorites] 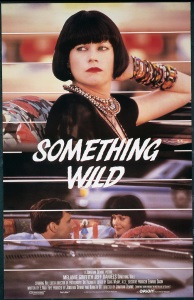