After wishing to be made big, a teenage boy wakes the next morning to find himself mysteriously in the body of an adult.


Empire: The finest in the spate of body-swap comedies of the late eighties, this is the film that revealed that Tom Hanks was capable of much more than just doltish comedy. His transformation into the jagged lope and wide-eyed enthusiasm of a prepubescent boy is a marvel of physical acting. The whole film rests on the realisation of that one idea, and the curly-haired everyman, here everyboy, makes it sing from the rafters.

The conceit, for all its inevitable sentiment, is that the world makes a whole lot more sense through the eyes of a child. Adults needlessly complicate, they lose touch with what matters. So this child behind-enemy-lines, dressed in adult skin, takes on the guise of idiot savant. Josh is a proto-Gump, but with the engaging street smarts of a neighbourhood kid.

WaPo: "Big" has a warmhearted sweetness that's invigorating; it makes you want to break out the Legos. It's only near the end of the film, when Hanks has to play the scenes for pathos, that the movie becomes cloying.

Still, the tone never becomes moralistic. It would have been easy for the screen writers to score points against their grown-up characters by portraying them as soulless monsters who've lost contact with the kid inside them. (The film's message, simply put, is, "Hold on to that kid.") But the movie resists the temptation to turn Josh's fantasy into a nightmare. What's great about it is that it shows how wonderfully full of toys the world of adults can be. And though this may fall under the heading of tiny, perhaps even fatuous, revelations, it does send you out of the theater with a lighter step.

NYTimes: ''Big'' features believable young teen-age mannerisms from the two real boys in its cast, and this only makes Mr. Hanks's funny, flawless impression that much more adorable. For any other full-grown actors who try their hands at fidgeting, squirming, throwing water balloons and wolfing down food in a huge variety of comically disgusting ways, this really is the performance to beat.

Rolling Stone: Hanks's performance in Big transcends the film's premise. This is a controlled, sustained, sensitive, sweet piece of business. He is vulnerable. He is uncoordinated. He plays puberty as though his body hair sprouted yesterday. It is his finest work to date. And never once in the film can he be accused of being a smartass, his trademark attitude. "I was a little worried about that," says Penny Marshall, who directed Big. "His fans like him to be irreverent onscreen; most of his parts have been very sarcastic. But this is an actor's part, and he's an actor."

'Big' is Secretly a Horror Movie

The darkest parts of Big that nobody talks about
posted by MoonOrb (17 comments total) 3 users marked this as a favorite
Penny Marshall's second film as director and the first film directed by a woman to gross in excess of $100 million at the U.S. box office.
posted by roger ackroyd at 11:01 PM on April 21, 2018 [5 favorites]

Fun movie, as I recall. I really wanted the Empire State Building Transformer. How could that not be fun? It's a building that turns into a robot! You could have a fluffy teddy gorilla and pretend it was King Kong and they could do fights!
posted by turbid dahlia at 3:26 PM on April 22, 2018

I remember watching this as a kid - and thinking: this is stupid. Not even kids act this way?! What is wrong with him?


For the longest time I had a grudge against Hanks, because of this movie and never broached fan or even like, of his again. Not even the Halloween Pumpkin thing.
posted by porpoise at 6:10 PM on April 22, 2018 [2 favorites]

My thoughts are less with the movie itself--I remember it as being quite enjoyable, although nothing that I've ever felt compelled to rewatch--as with some of the opinions linked above.

Incorrect; it *wasn't* a Freaky Friday Flip [TVTropes], which is what made it better, and, yes, darker. The FFF avoids some of the complications that Josh suffered because the kid-with-the-mind-of-the-adult is still around to play the part; that's also where a lot of the comedy comes from. Big only has half of that equation to work with, and still is the one that most people remember instead of the FFFs.

It's only near the end of the film, when Hanks has to play the scenes for pathos, that the movie becomes cloying.

I don't think that it's cloying, and there's plenty of pathos at the beginning of the film, with Josh's mom's terror and Josh's confusion, plus his first night in NYC.

'Big' is Secretly a Horror Movie

The darkest parts of Big that nobody talks about

There's nothing secret about the dark parts, and if no one talks about them, it's because they're pretty obvious. The hot-take articles also suffer from a lack of perspective, which is that, thirty years ago, the Stranger Danger/anti-free-range-kids movement was already underway, but hadn't reached the heights that are considered normal today.
posted by Halloween Jack at 8:41 PM on April 22, 2018

As a fellow Canadian who enjoyed the movie when I was younger but hasn't seen it in probably a decade or more, I'm curious what you mean by this. I don't remember finding it any more American than any other Hollywood movie.
posted by asnider at 12:39 PM on April 23, 2018

Is there a better moment of physical comedy than when Josh eats the beluga caviar, spits it into a napkin and then wipes his tongue?
posted by soelo at 1:45 PM on April 23, 2018 [3 favorites]

My sister's comment at the time was that, if you had a chance to skip puberty, you should take it -- she thought Josh should have stayed an adult.
posted by jwgh at 5:53 AM on April 24, 2018

I can't find a good clip, but this film had one of the great callbacks in Newsradio's "Arcade" episode, where Dave can't stop playing the old Stargate Defender game someone's stuck in the hallway, which he was so obsessed with in high school he blew his SATs over it. After the usual plot hijinks and failed attempts at demonstrating that he has more maturity now than he did then, the console gets replaced by a fortune-telling machine. He walks up to it, drops in a quarter, and says, despondently, "I wish I was big." Perfect.
posted by praemunire at 11:28 AM on April 24, 2018 [4 favorites]

any more American than any other Hollywood movie

Yeah, maybe it was more of a 'very 80's' vibe (material pursuit, defined by belongings) rather than a strictly American vibe.
posted by porpoise at 3:54 PM on April 24, 2018

It's a small moment, but I remember it impressing me when I saw it -

It's the scene where Josh and his friend have gotten him settled in that flop house in Times Square early on, and his friend has to go home but promises to come back the next day and help Josh figure out what to do. The friend leaves, leaving Josh alone. And Josh is sitting in his room, utterly alone and not sure what's going to happen, and he starts listening to the other people in this seedy hotel start fighting or doing god knows what...just watch.

And then of course there is: "Shimmy shimmy cocoa pop, shimmy shimmy roooock...." Tom Hanks discusses the origin of that here, and proves he still has it memorized.
posted by EmpressCallipygos at 9:30 AM on April 25, 2018 [2 favorites]

My sister's comment at the time was that, if you had a chance to skip puberty, you should take it -- she thought Josh should have stayed an adult

I’m with your sister. I remember watching this at the time and enjoying it for the most part, but leaving thinking that the movie didn’t do a great job explaining exactly why Josh would want to return to his old self. Probably less a problem with the movie and more an issue with me, who didn’t have the greatest junior high school experience and figured if I had a magical way out I’d take it and never look back!
posted by The Gooch at 10:23 AM on April 25, 2018 [1 favorite]

The suggestion Josh makes to Susan at the end of the film - ask the Zoltar machine to make you young again would have made an interesting sequel. "Small", I guess.
posted by rongorongo at 1:41 AM on May 1, 2018 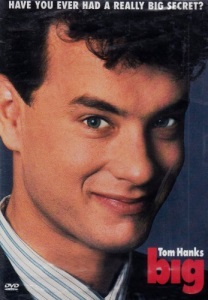