A radical American journalist becomes involved with the Communist revolution in Russia, and hopes to bring its spirit and idealism to the United States.


Rolling Stone: No other movie star in history has used power with such daring and wisdom as Warren Beatty with Reds. This vivid heroic saga — which Beatty not only acted in but also produced, directed and cowrote — brings to life the tumultuous global upheaval that surrounded the First World War. Marxism, feminism, free love: These subjects might have assured box-office success in the late Sixties, when Beatty first considered filming the life of activist reporter John Reed. Releasing this movie in the Reagan Eighties would seem to be professional suicide. But the drama, romance, humor and spectacle of Reds should transcend the conservative miasma of the moment.

NYTimes: Most astonishing is the way the movie, which abounds with Great Moments of History, including the Bolshevik takeover of the Winter Palace in Petrograd, avoids the patently absurd, even as Reed and Louise, drunk on the excitement of the successful revolution they've just witnessed, make love in a cold Petrograd flat to the strains of ''The Internationale.'' The secret, I think, is that the film sees Reed and Louise as history's golden children, crass and self-obsessed but genuinely committed to causes they don't yet fully understand.

There are times when the movie falters - a reconciliation between Louise and Reed on a French battlefield, which never happened and seems drawn from an old Hollywood picture; a terrible decision by Mr. Beatty to cut to a close-up of a cute, sympathetic puppy when Reed is distraught and crying after one of Louise's periodic departures, and a long montage depicting the ''Doctor Zhivago''-like hardships of Louise's second journey to Russia to join Reed in 1920, the year of his death.

These, however, are minor faults in a large, remarkably rich, romantic film that dramatizes - in a way that no other commercial movie in my memory has ever done - the excitement of being young, idealistic and foolish in a time when everything still seemed possible.

Empire: Oddly, the big story of the birth of the Soviet Union plays less well than the more obscure stuff about the breaking-up of the American Socialist Party into two separate Communist parties. Reed dedicates a significant chunk of his life to the ultimately pointless task of lobbying the Soviets to recognise his Communist Labour Party, as opposed to the Communist Party of America. He is then stuck in a Finnish jail because everyone except Louise wants him out of the way — prompting her to make a heroic journey of rescue that delivers a real old-movie climax. Intercut with the dramatised story are interview snippets from Adela Rogers St. John, Rebecca West, Henry Miller and other wrinkly witnesses whose views range from the adulatory ("As a journalist, Jack Reed was the tops") to the dismissive ("Were they socialists...? I've forgotten all about them"). The large cast, meanwhile, finds room for Maureen Stapleton, as radical martyr Emma Goldman, and Gene Hackman as a cynical newspaper editor.

Slant: However, though it has been absurdly over-praised by some, there are a lot of enjoyable things in Reds aside from the use of the witnesses. Stephen Sondheim’s score has just the right mixture of period-nickelodeon music and discreetly romantic piano, the Greenwich Village/Provincetown scenes have a heady sort of glamour, and the Russian Revolution sequences that serve as the climax of the first half are excitingly edited and acted. The unusual casting helps, too: Stapleton is terrifically earthy and peremptory as Emma (she won an Oscar), and the use of writer Jerzy Kosinski and Paris Review editor George Plimpton in major roles feels smart and juicy. Gene Hackman livens things up occasionally as a newspaperman, and, best of all, Jack Nicholson’s moody, anguished portrait of Eugene O’Neill all but steals the film. O’Neill has Bryant figured out, but he still gets wounded by her; Nicholson’s slow-burning intensity unearths the endearing vulnerability in Keaton, and their melancholy, painful love scenes stop the movie cold several times. These scenes are so striking that you wish a smaller film could have been made about the two of them and their war with each other, but the lure of David Lean-elephantitis held sway. Reds is finally just an appealingly conventional epic movie-star romance with radical trimmings, but it contains several sharper elements that suggest the colorful period it seeks to recreate.

Roger Ebert: The whole movie finally comes down to the fact that the characters matter to us. Beatty may be fascinated by the ins and outs of American left-wing politics sixty years ago, but he is not so idealistic as to believe an American mass audience can be inspired to care as deeply. So he gives us people. And they are seen here with such warmth and affection that we sense new dimensions not only in Beatty and Keaton, but especially in Nicholson.

Warren Beatty’s ‘Reds’: ‘A Long, Long Movie About a Communist Who Died’

Thunder on the Left: The Making of Reds
posted by MoonOrb (4 comments total)
I remember so little about this movie except that as a teenage girl I LOVED it. Great performances, well worth a watch.
posted by potrzebie at 11:58 PM on April 22, 2018

All I remember about it as a teenage (or whatever, I don't know how old I was) girl was the "please don't leave me" scene at the train. Which was hot.
posted by jenfullmoon at 7:06 AM on April 23, 2018

Honestly, all I remember from it was the lovemaking scene, because I was severely embarrassed to be watching it with two grownups as a teenager. Did Nicholson have a mustache in this? (checks Google) Yep, he did, so I guess I remember that, too.
posted by Halloween Jack at 7:42 AM on April 23, 2018

I remember this as a teen when my K Kim would take me to go see Serious Films like Gallipoli, Mx Havelaar, and that French film about the depressed woman. And Reds. While I didn't quite have the context my mother, the lifelong socialist did, I found it moving and very enjoyable. At least moreso than the French film about the depressed woman.
posted by happyroach at 12:47 PM on April 23, 2018 [1 favorite] 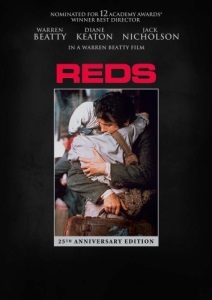