Two con men try to settle their rivalry by betting on who can swindle a young American heiress out of $50,000 first.


WaPo: "Dirty Rotten Scoundrels," starring Steve Martin and Michael Caine, is a comedy about the joys of conning, and you feel a secret release in the flagrant amorality and greed of its characters. They're predators, these two, sharks feasting on the gullible rich women who come to wiggle their toes in the azure waters of Beaumont-sur-Mer in the South of France. When decent human sentiments are mentioned they cock their heads in puzzlement. Their corruption has a glorious purity. They're rats, clean through.

Director Frank Oz has brought a devilish tang to the machinations here, and the actors bring a sense of a spoiled grandeur to their characters' mingy souls. The script for the film is Dale Launer's reworking of the forgettable 1964 comedy "Bedtime Story," starring Marlon Brando and David Niven. And the premise is as disposable now as it was then. Two rival gigolos bet each other that they will be the first to extract $50,000 from an American "soap queen" (Glenne Headley), with the agreement that the loser will leave town forever.

Roger Ebert: The plot is mostly an excuse for a series of bizarre set-pieces in which one con man tries to corner the other in an outrageous trap. My favorite sequence came when Caine played an incredibly wealthy European aristocrat and saddled Martin with the hapless role of Ruprecht, his brother. Ruprecht is so maladroit that he has to eat with a cork on the end of his fork, to prevent damage if he stabs himself in the eye. (For added protection, he also wears an eyepatch.) The plot develops into a series of "The Sting"-like cons within cons, as the two confidence men surpass themselves in their attempts to outsmart the surprisingly elusive Headly. Caine goes the high road, with visual and verbal humor. Martin does more pratfalls than in any of his movies since "The Jerk," and he has one absolutely inspired scene in a jail cell. He knows the name of only one local citizen who might bail him out: Lawrence Jamieson. And as he tries to remember his name, his mind and body undergo the most fearsome contortions. Martin, who seems to be improvising the scene, tries to drag the missing name from his stubborn subconscious, one syllable at a time.

NYTimes: Their comic methods are different, but from their first unequal encounter until the very last in a series of twist endings, Mr. Caine and Mr. Martin work together with an exuberant ease that's a joy to watch .

Don't mistake what Mr. Caine does with the work of a straight man. Like Jack Benny, whom he otherwise resembles not at all, Mr. Caine is a sneaky master of the pregnant reaction shot. This is a superb comic performance, seeming laid-back but larcenous in effect. Looking exceptionally fit, well-fed and intimidatingly grand, Mr. Caine nearly walks off with the movie, mostly by appearing to be politely appalled by the gauche Freddy Benson.

Playing to (and for) his co-star, Mr. Martin gives a performance of inspired goofiness. As an American innocent who sets out to bag big game with a BB gun, he is the last hilariously enfeebled embodiment of 19th-century frontier optimism. No matter how often his Freddy Benson fails, he's ever ready to get up, brush himself off and start all over again.

First Look at Rebel Wilson & Anne Hathaway in Dirty Rotten Scoundrels Remake
posted by MoonOrb (15 comments total) 4 users marked this as a favorite
So sad, Glenne Headly would have been perfect in the upcomming Oceans 8.
posted by sammyo at 10:50 AM on April 28, 2018 [8 favorites]

Fun fact: the Greek millionaire mark in the final scene was played by the late Louis Zorich, who played the constable in 1971's Fiddler on the Roof.
posted by duffell at 10:58 AM on April 28, 2018

I remember going to see this as a teenager with my parents and my dad laughing the hardest I had ever heard him laugh (before or since). It's a great comedy with some of the finest work put in by Caine and Martin (not to mention getting to hear Emperor Palpatine utter "Welcome to Hell"), but it will always primarily the movie that made my dad cry tears of joy.
posted by AlonzoMosleyFBI at 1:04 PM on April 28, 2018 [7 favorites]

This film just doesn't get old. My mom wasn't a fan of Martin until I showed her this film. It's just so perfectly done and so many quotable moments. I'm still waiting for the day I can say "Your trident, sir."
posted by miss-lapin at 11:58 PM on April 28, 2018 [2 favorites]

Oh, I love this movie!

Frank Oz's commentary track on the DVD is kinda wacky in that he talks a lot about locations! That's literally the least interesting thing about this movie, and yet he makes a point to linger on the topic any time he can.

But! He does talk quite a bit about Martin and Caine and how different their styles were. Steve Martin apparently works in a way that he best hits his stride by improvising and trying out a lot of different takes. Like, that jail cell scene? Oz was right under the camera egging Martin on and making him do take after take after take until he could get the most sublime and frenzied material. On the other hand, Michael Caine would come out of his trailer, do a single perfect Michael Caine-style take, and head back to his trailer. So scenes with both actors had to strike a balance -- do enough takes to get Martin to his best, while not doing so many takes that Caine would get exasperated with the whole process.
posted by mochapickle at 1:31 PM on April 29, 2018 [5 favorites]

Also, apparently they shot without an ending. Glenne Headly was marvelous with accents, and when Steve Martin heard her Long Island one, he rushed to Frank Oz and insisted they use it. And it's perfect.
posted by mochapickle at 1:34 PM on April 29, 2018 [2 favorites]

Like, that jail cell scene? Oz was right under the camera egging Martin on and making him do take after take after take until he could get the most sublime and frenzied material.

I recently made my children (ages 10 to 23) watch this with me. Whenever I ask them to watch a movie, they're like, "OMG, Mom, what sad pathetic oldie are you foisting on us now?" and then they end up loving it. This was no different. Such sublime comedy. My ten-year-old nearly hyperventilated laughing.
posted by Orlop at 6:30 AM on April 30, 2018 [1 favorite]

A stone cold classic, and unlike so many comedies it's aged brilliantly.

This is super exciting news. Going back and watching other movies I loved from about that age has ... well, without going into detail, it has been upsetting enough to see the kinds of things it was so easy for me to laugh at back then that I've mostly just stopped doing it.
posted by solotoro at 8:41 AM on April 30, 2018 [1 favorite]

This was based on a 1964 film, Bedtime Story, which had Marlon Brando and David Niven in the roles played by Martin and Caine. It was a fairly sophisticated romp, but Oz and Martin have dumbed it down considerably. I'm not saying that's bad, but while I probably laughed harder at the remake, I remember the original as having more substance and heart.
posted by ubiquity at 8:49 AM on April 30, 2018 [2 favorites]

I'm a wheelchair user, and I'm happy to report the scene in which Caine tries to torment Martin into revealing he is not, in fact, disabled, is one of the funniest things I have ever seen.
posted by DrAstroZoom at 2:22 PM on May 2, 2018 [6 favorites] 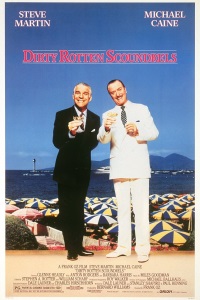