Offred spirals as a Gilead ceremony disrupts her relationship with Nick; Janine tries to adjust to life in the Colonies, jeopardizing her friendship with Emily.
posted by Bibliogeek (16 comments total) 2 users marked this as a favorite
I know that to June, Nick must represent something like freedom or independence or at the very least some small rebellion against Gilead. But I've never bought into her falling for him so much so that a sham, forced marriage to a child bride he had never met would be shattering for her. But perhaps that was just the last straw, in addition to all the other straws (rape, torture, loss of her child and husband, daily dehumanization, girl has had a LOT of straws thrown at her).

And because they insist of filming everything SO EFFING DARK, I have no idea if she fell out her window? Jumped? I don't know. I spent too much of this episode squinting at my screen, vainly searching the blackness for any sort of identifying detail to orient myself by.

"Cows don't get married," cue ugly sobbing. Janine, you bad ass sprite, you are too pure for this world. Hold tight to any sliver of humanity you can, find any small joy you can.

Kit + Fiona = 4Ever (Fiona, holding her feet as they move her body, not ready to say goodbye? My heart snapped in two.)

I don't know what it is, but a lot of the institutional awfulness of Gilead is becoming.... less awful, or at least less viscerally awful to me. Of COURSE they have child brides. Of course. OF COURSE they treat women like breeding stock. Of course. Of COURSE they regularly execute dissidents. Of course they do! But show me people being ripped away from those they love and I am a weeping, snotty wreck. That's where the show really shines for me, feeling the impact of the "little" cruelties that wear away at your humanity.
posted by Bibliogeek at 4:11 AM on May 16, 2018 [3 favorites]

I watch on my tablet, which makes the darkness issue even worse. There were long stretches where I was just guessing what might be going on based on dialogue. Please, cinematographers, have some pity on those of us who aren't watching on 4k screens in dimmed rooms with perfect soft back-lighting. It's the lighting equivalent of drowning out the dialogue with a super loud soundtrack, only I can't fix it by turning on subtitles.

I had been wondering if June suspected a miscarriage and was trying to make sure that it looked like it was induced by external abuse so she would not be punished for possibly not being fertile. How many miscarriages does a handmaid get before being sent to the colonies?
posted by Karmakaze at 10:25 AM on May 16, 2018 [3 favorites]

I think they've mentioned it's three "postings" for a certain time period (18 months?) and then if nothing's happened, you go off to the colonies. I'm not sure how successful pregnancies and miscarriages factor into that. I assume if you're successful at carrying babies to term then you keep being passed around until it's three postings without a baby and then off you go. One would think that, with all their fertility knowledge, they'd remember that up to 25% of recognized pregnancies end in miscarriage and keep trying, but in this world it's easier to blame the Handmaid.
posted by elsietheeel at 12:05 PM on May 16, 2018

Some thoughts from a Jewish watcher:

-The Rachel/Leah reference is particularly interesting here, with the wedding ceremony. Jacob gets tricked into marrying Leah instead of Rachel due to her (Leah) wearing a heavy veil. The Jewish wedding tradition has a veiling ceremony, in which the groom puts the veil down over the bride's face. At this point, presumably, you can check to make sure that you're marrying the person you think you're marrying. The Gilead ceremony, in addition to the other horrors...did not seem to have that check in place.

-The Rabbi in the colonies recites parts of the Mourner's Kaddish. The Kaddish says nothing about death; it's primarily about sanctifying God's name (Text here), and is thus very appropriate for Janine's attitude here of holding on to her faith in God even in the worse circumstances.
posted by damayanti at 12:14 PM on May 16, 2018 [5 favorites]

"I'm not sure how successful pregnancies and miscarriages factor into that. I assume if you're successful at carrying babies to term then you keep being passed around until it's three postings without a baby and then off you go."

IIRC, in the book it said a successful pregnancy guaranteed that at least you'd never be sent to the Colonies. But it's been a while since I read it.
posted by litlnemo at 4:16 AM on May 17, 2018 [1 favorite]

Poor Janine. Poor sweet Janine. I know there's some debate about how old she is, but I think we've decided she's probably not much more than early 20s (that's both book context & first season). She should not be that ... innocent isn't the right word, really, but genuine and sweet, for all that's happened to her. Her naivete seems to be such a blessing for her -- despite everything she's been through, she still sees the good. Regardless of how broken she's been, the show never makes fun of her. Janine, I hope you make it through this, but you know, I also watch this show ...

(Emily coming around broke my heart! I'm glad Alexis Bledel gets a chance to be a grownup on this show.)

I didn't notice the lack of voiceover from June until a review pointed it out, but I probably should have. I liked that even Serena was frustrated with her -- Serena clearly resents June, but also seemed to admire her spirit and see her as someone she could talk to (although absolutely not her equal).

I was screaming at the TV to tell Nick to STOP LOOKING AT JUNE during the whole wedding thing. Like, dude, come on. You know better than that. The whole child bride thing is gross (although I sort of liked that Serena also agreed it was gross, but lady, you built this world so now you gotta live in it) but I do hope this means we see less of Nick. Because Nick is boring.

I still love to hate Aunt Lydia. Ann Dowd is so wonderful in the role. Aunt Lydia knows who she is, and what she's doing. And absolutely knows why, and that makes her all the more frightening. I feel like most of the other people are just kind of going along with Gilead. Not Aunt Lydia. She believes this 100%.

I'm glad June didn't have a miscarriage (although I'm not really sure how she didn't, but OK, TV world) but all of that was upsetting. I don't blame June for not saying anything to anyone -- she knew she was screwed regardless.

Amongst many other observations one could make of this season, I was aware as Nick's bride was unveiled, that out of all of the brides revealed as children, his assigned bride /the actor had a more adolescent than child face and clearly developed body. She was sexualised, in action via her dress, the choice of camera angle to show her developed bust, and this was a conscious actor choice. I found it a confronting choice for a series with the themes of patriarchal exploitation. This ushering element of cast choice towards protecting Nick from being perceived as perverted is frustrating. We know he isn't. We've been privileged with access to his rebellion, his emotional capacities and his care for June. We don't need hand holding, show. And we don't need a complicating dissonance by that choice of actor.
posted by honey-barbara at 4:24 AM on May 19, 2018 [1 favorite]

Yes, the other brides looked about middle school age, whereas Eden is more like 15-16 (and played by a 20yo actor). That's a big difference - in some present-day conservative religious communities, adults would not bat an eye at a 20-something man courting a 16yo and might even encourage it. I agree that they're trying to have it both ways by shocking us with the child brides but not taking it to the next step of expecting Nick to go forth and multiply with a seventh grader.
posted by Flannery Culp at 9:02 AM on May 19, 2018 [1 favorite]

Did the Mexico thing just go away? Who is the girl living with Luke? Serena has watercolors; does she have a secret stash of writings?
posted by fluttering hellfire at 6:03 PM on May 19, 2018

"I used to smoke too" was a great nod.
The lighting was ridiculous, we have a good big TV, but it's a bright evening and the last half of the episode was basically an audiobook for us.
posted by Iteki at 11:24 AM on May 20, 2018 [1 favorite]

The Rachel/Leah reference is particularly interesting here, with the wedding ceremony.

That was a reference to a new Rachel and Leah center Gilead is building.
posted by Pendragon at 11:05 AM on June 10, 2018

I'm glad everyone else is in the dark too - watching this show is like gaslighting on at least two levels. Maybe it's a conscious choice? I do think Gilead works better in broad daylight.

Another reference from the book after last week's "pig ball": there are always exceptions.

I hope this is the last season - I think June was promising the camera as much as the fetus.
posted by Wrinkled Stumpskin at 3:27 PM on June 19, 2018

Very late to watching. I'm struck by the continued theme that Serena, too, is a victim of Gilead. Not at the coarsest level; as a Wife she has all the power. But we're shown time and again how she is miserable too, particularly how she was forced to stop using her skills as a thinker and writer after the political movement she helped create took power.

Here Serena's victimization is smaller things. The indignity of having Aunt Lydia in her house telling her what to do, that Lydia has more freedom (a pencil) than she does. Also her seeming sympathy / frustration with Offred that her spirit has been entirely crushed.

Serena's victimization is nothing at all compared to June, of course, or the women in the colonies. She has power and autonomy. But the patriarchy harms her too and they are clear in showing the signs of it.
posted by Nelson at 7:42 AM on July 5, 2018 [1 favorite] 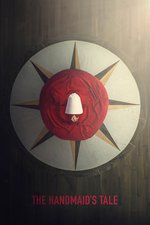