In 1967, five young men undergo boot camp training before being shipped out to Vietnam. Once they get there, the experience proves worse than they could have imagined.


Variety: The Boys in Company C is a spotty but okay popcorn trade drama about five young Marines and how their lives were changed by duty in the Vietnam war. Laden with barracks dialog and played at the enlisted man’s level, the Raymond Chow production, directed well by Sidney J. Furie, features strong performances by some very fine actors.

Not that The Boys in Company C is anywhere near a definitive film about the Vietnam debacle. No geopolitics or other cosmic matters intrude; instead, it’s a deliberate action programmer (shot in the Philippines).

WaPo: While "Boys" loads up on hackneyed Vietnam imagery - dope-smuggling, fragging, hypocrisies of body counts, the soldier as pawn in a larger game, etc. - it somehow manages to tiptoe around cliche. Viewed as simply a film about the evolution of friendship under fire, it makes for a mostly sympathetic, sometimes moving, fast-paced war story.

What emerges from the Philippines location footage of a collaborative screenplay between director Sidney Furie and Rick Natkin is a tale that celebrates the triumph of the human spirit, glorifies the Corps and reveals a cache of undiscovered talent.

"boys" should do for actor Stan Shaw what "Roots" did for former unknown Levan (Kunte Kinte) Burton. Furie doesn't allow Shaw enough scenes to sustain a convincing conversion from dope-dealing ghetto cynic to courageous Cpl. Tyrone Washington, but his role as platoon leader and dependable friend crackles with the authenticity of Chicago roots.

Shaw's stunning, street-wise performance is accented by the memorable crustiness of Company C's boot camp drill instructor, played by Lee Ermey. A former DI who now runs shrimp boats in Manila, Ermey was originally hired as technical adviser; but Furie enlisted him on the spot for a role that eclipses a classic - Jack Webb in "The DI."

Yet, if the good guys emerge as saints, Furie abandons the bad guys to caricature. Vietnamese Col. Trang (Vic Diaz), for example, comes off as a character out of Charlie Chan reruns, and senior officers don't fare much better.

NYTimes: The movie is so determined to create instant heroes that it must have its instant villains too; in this case, there are corrupt South Vietnamese officials and excessively gung‐ho Marine officers to be blamed. Less visible, but also under indictment, are drugs, the Vietcong and American racism. But there's no real evidence of the troubled American political climate of 1967, which is when the story takes place. As far as the screenplay is concerned, this might as well be World War II.

Roger Ebert: Sidney J. Furie’s “The Boys In Company C” is the first movie since 1968 about actual combat in Vietnam (Francis Coppola’s “Apocalypse Now” will be the second, if it ever completes its interminable post-production). Furie’s movie is, in other words, a “war movie,” a member of a genre that seemed more brave and thrilling in the days of World War II and Korea, when John Wayne was storming up hills.

And it’s being attacked on just those grounds: The newsweeklies charge that it takes the old Hollywood clichés arid simply transplants them to Southeast Asia. I don't agree. I think the movie is, first and best, a thrilling entertainment that starts by being funny and ends by being very deeply moving. But I also think it reflects an attitude about Vietnam that wouldn’t have been possible in a war movie of the early 1940s.

Vietnam just wasn’t like other wars, and you can sense that in the movie’s first scenes, as a company of Marine recruits awkwardly tries to find its way through boot camp. If there’s an esprit de corps here, it’s one the Marines have to find by themselves, and on their own. The hard-as-nails, tough-talking drill instructors (cast, by the way, from real life) don’t mention duty or patriotism much, but there’s a lot of talk about how these guys had better learn to save their asses or they’ll come back in body bags. The Marines are seen as a pragmatic instrument to send trained infantry to where they’re needed; you don’t hear anyone singing “From the Halls of Montezuma.”

It’s this subtle but definite change in attitude that makes “The Boys In Company C” more than just exciting, or entertaining. There aren’t many abstract speeches in the movie, and nobody gets up and delivers his opinion about Vietnam (except in terms of the most direct cynicism). And yet, in the craziness of the company’s first overseas patrol (they get caught in an enemy ambush while transporting luxury goods for a general’s birthday party), all of the reality is there. And when, driven by insane demands for larger enemy body counts, they call in firepower on a nonexistent enemy position, their action seems, strangely, almost logical.

The movie bears comparison to “The Dirty Dozen” and “MASH,” especially in the way it constructs an easy camaraderie among its actors. The mostly young, mostly unknown cast of “Company C” lived together on location in the Philippines while making the movie, and their mutual friendship seems to show through.

Trailer
posted by MoonOrb (3 comments total) 3 users marked this as a favorite
There were many times during my time in Iraq when I thought of the scene in the movie where one Marine turns to another and says, "Hey, you want to spend a million dollars right now?" And then they call in an artillery and bombing strike and you see all the dozens and hundreds and thousands of munitions go off and think, yes, that probably cost a million dollars.

It was my observation that "Boys in Company C" is generally well liked among actual infantryman, both army and Marine-- or at least it was in the late 20th/early 21st centuries. Don't know about today's kids.
posted by seasparrow at 9:44 PM on May 16, 2018 [2 favorites]

I couldn't tell you much about what happens in the rest of this movie, but what happens at the end has stuck with me since I first saw the picture 35 years ago.
posted by ob1quixote at 10:15 PM on May 19, 2018 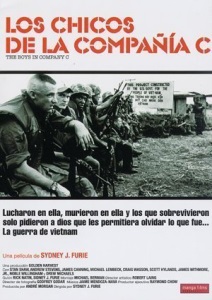