A man robs a bank to pay for his lover's operation; it turns into a hostage situation and a media circus.


The Nation: The film is based on the magazine account of a one-day sensation that occurred in Brooklyn a few years ago – an attempted bank robbery that mobilized a large section of the New York police, agents of the FBI and the TV networks for fourteen hours of a hot summer afternoon and evening. The inventor of this ill-starred venture, as Lumet tells the story, is a young Brooklynite named Sonny (Al Pacino), whose most memorable characteristics are that he is singularly unfitted mentally and emotionally to rob a bank and that he is a homosexual. He has taken this desperate way of raising money in order to finance a sex-change operation for his friend, at the moment recovering in the Bellevue psychiatric ward from an attempt at suicide. Sonny is also burdened with a very small but very possessive mother and with a wife and two small children. His companion in crime is Sal (John Cazale), an ex-convict whose intelligence and powers of self-control are alike unimpressive; he speaks with feeling of the human body as a sacred vessel of the Lord, but no one – least of all Sonny – knows what use he will make of an automatic rifle if his own vessel is seriously threatened.

Roger Ebert: Criminals become celebrities because their crimes provide fodder for the media. Many of the fashionable new crimes -- hijacking, taking hostages -- are committed primarily as publicity stunts. And a complex relationship grows up among the criminals, their victims, the police, and the press. Knowing they're on TV, hostages comb their hair and killers say the things they've learned on the evening news.

That's the subject, in a way, of Sidney Lumet's pointed film. It's based on an actual bank robbery that took place in New York in the 1970s. And it seems to borrow, too, from that curious episode in Stockholm when hostages, barricaded in a bank vault with would-be robbers, began to identify with their captors. The presence of reporters and live TV cameras changed the nature of those events, helped to dictate them, made them into happenings with their own internal logic.

But Lumet's film is also a study of a fascinating character: Sonny, the bank robber who takes charge, played by Al Pacino as a compulsive and most complex man. He's street-smart, he fought in Vietnam, he's running the stick-up in order to get money for his homosexual lover to have a sex-change operation. He's also married to a chubby and shrill woman with three kids, and he has a terrifically possessive mother (the Freudianism gets a little thick at times). Sonny isn't explained or analyzed -- just presented. He becomes one of the most interesting modern movie characters, ranking with Gene Hackman's eavesdropper in "The Conversation" and Jack Nicholson's Bobby Dupea in "Five Easy Pieces."

NYTimes: If you can let yourself laugh at desperation that has turned seriously lunatic, the film is funny, but mostly it's reportorially efficient and vivid, in the understated way of news writing that avoids easy speculation.

Each of the several principal lives it touches has been grotesquely bent out of shape. The director and Frank Pierson, who wrote the fine screenplay, don't attempt to supply reasons. The movie says only that this is what happened. No more. This severely limits the film's emotional impact, though not its seriousness or its fascination. “Dog Day Afternoon” is a gaudy street‐carnival of a movie that rudely invites laughs at inappropriate moments, which is in keeping with the city's concrete sensibility.

More Roger Ebert: It's an actor's picture. Lumet and his editor, Dede Allen, take the time to allow the actors to live within the characters; we forget we're watching performances. Although the movie contains tragedy and the potential for greater tragedy, it is also tremendously funny. But Frank Pierson's Oscar-winning screenplay never pauses for a laugh; the laughter grows organically out of people and situations. You can believe that even with hostages taken and firearms being waved around, such elements of human comedy would nevertheless arise.

One of the funny moments comes at the beginning, when three robbers enter a bank but one of them chickens out and says he can't go through with it. "Stevie," says his partner Sonny, "don't take the car." "But how am I gonna get home?" Stevie whines. Is that real? Yes, because you believe that Stevie would in fact have driven himself home and that Sonny (Al Pacino) would think of that.

Pacino has said the most memorable moment in the movie involves the delivery boy (Lionel Pina) who brings pizza to the robbers and their hostages. He's been watching the drama unfold on live TV, and when he's applauded by the crowd, he does a little skip and jump and says, "I'm a star!" Television turns the moment into what, at that time, was a fairly new event for live broadcasting. Sonny expands in the TV lights, strutting back and forth in front of the bank and unwisely exposing himself to rooftops lined with snipers. His remaining partner Sal (John Cazale), on the other hand, shrinks within himself. He can't believe he's a bank robber. He can't believe Sonny says he will kill people. He's offended that on TV, which has the facts a little confused, he's described as a homosexual. He can't believe he's expected to get on a jet with the others and fly to safety. He's never flown before. Asked to name a foreign country they can fly to, he says "Wyoming." The line was improvised on the spot by Cazale.

Empire: In The Dorchester Hotel in London, sometime in January 1974, Al Pacino told director Sidney Lumet and screenwriter Frank Pierson (Cool Hand Luke) that he categorically would not play the part of Sonny Wortzik in Dog Day Afternoon. It was not the news they had wanted to hear. Not only had they flown over just for this meeting, the part had been written with Pacino in mind. But he was adamant. He had just finished shooting The Godfather Part II, which had left him, in his own words, "Exhausted and infinitely depressed" and just didn't fancy taking on a role that would, given his famous dedication to The Method, have him working himself up to a state of near hysterical anxiety on a daily basis. Apologies were made, hands were shaken and Lumet dispatched the script to Dustin Hoffman. But when Pacino heard that his rival in the diminutive acting genius stakes was showing interest he did an about face and demanded another shufti. The result was not only the granddaddy of all heist-gone-wrong films, but one of his finest performances in the decade he, De Niro and the crime movie made their own.

How to write tragedy (as explained by Dog Day Afternoon)

Such a good movie, extremely intense. Fantastic acting on all fronts. So sad we lost John Cazale so young, this movie really showcases his chops. (He debuted in The Godfather and only made five films - all of which were Best Picture nominees.)

It's probably been seven to 10 years since I watched Dog Day Afternoon, not exactly a "feel good" movie it tends to hang with me for a few days afterwards. But I still get a lot out of it. I do wish that Dog Day Afternoon would get a theatrical re-release. I've seen The Godfather in re-release twice, Princess Bride and a number of other classic films that circulate regularly, but not so much this one. Pity.

It's a movie that I'll watch regardless of which point it's at if I come across it on TV, and although it's been a while, what stays with me is how decently it presents Sonny's sexuality. Maybe watching it now I'd find I was way off and had huge blind spots (Chris Sarandon's character doesn't come off well, but at the same time, that's the character, I don't know), but it feels pretty progressive for a mainstream movie made in 1975. Googling around for queer commentary and analysis has brought up some pretty divided takes, I'd really like to read more if anyone has any to share.
posted by Alvy Ampersand at 1:23 AM on May 28, 2018

There was a recent documentary called "The Dog" about the real life Sonny. It's not a particularly good doc, but worth watching if you want some more context on the queer themes that seemed glossed over in the film.
posted by cazoo at 6:28 PM on May 29, 2018

Incredible viewing experience, especially if you (like me) only have vague memories of it being in perpetual rotation on local-channel OTA afternoon movie shows along the lines of "Saturday Afternoon Action Theater" or whatever. I have a hard time imagining how mind-blowing this film must have been to theatrical audiences on release. Absolutely deserves its' classic status.

We watched this at home in a mini festival with a couple other classics of seventies gritty suspense films, "The Taking of Pelham 123," (1974) another NYC-based hostage drama with an improbable plot which features amazing location work, and "The French Connection" (1971), lauded for Gene Hackman's performance as a antihero cop and for an improbable chase sequence between an elevated train and a car.

"Dog Day Afternoon" was shot in the fall of 1974, and "Pelham 123" was released in October 1974, so "Dog Day"'s pre-production phase must have preceded at least commercial screenings of "Pelham". The two films are very distinct, however, with "Pelham" taking numerous cues from "French Connection" and "Dog Day" effectively breaking new ground for American cinema in numerous ways, from the relatively minor (very naturalistic use of profane language, the use of workshopping and improvisation in key, high-payoff scenes) to the truly major (the introduction of gay and trans themes as primary motivators shown with relative evenhandedness).

We found "Dog Day" to be head and shoulders above the other two films, as worthwhile as they were. Pacino's performance is literally amazing, just riveting. I mean he chews the scenery in what we can see as a signature style of his performance but while often in his later roles that bombast is alienating and used to convey the danger and insanity of the characters he is portraying, here, you feel his charisma as an actor being deployed to make Sonny attractive to the audience. Amazing film-watching experience.
posted by mwhybark at 12:36 PM on February 20, 2019 [2 favorites] 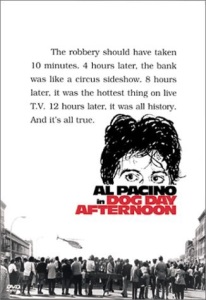