In New York, armed men hijack a subway car and demand a ransom for the passengers. Even if it's paid, how could they get away?


Empire: The kind of gritty, relentless thriller that could only come from the ‘70s, Joseph Sargent’s subway suspenser is a hardboiled treat. A culturally influential flick (Quentin Tarantino would later nick the criminals using colours as codenames gambit for Reservoir Dogs; the Beastie Boys reference it in the song Sure Shot), it mixes traditional action licks, cat and mouse mindgames, political satire, male camaraderie and a decidedly Noo Yawk sensibility (all wrapped up in David Shire’s terrific blaxploitation-esque score) into a genre movie, without ever forgoing respect for the audiences intelligences.

Based on John Godey’s potboiler, Sargent plays out the premise of a subway hold up with a logical, ruthless efficiency, creating the set-up in crisp clean tones (as we meet Garber, he is giving a delegation from the Tokyo subway system a guided tour of the control centre, imparting lots of knowledge the audience will need later) and then wringing out the hostage crisis for every drop of tension. The core relationship of the film, between Shaw’s cold eyed crim and Matthau’s wisecracking cop, is terrifically etched, especially considering it is conducted entirely over the radio. Shaw’s Blue, a former Brit Army colonel and mercenary, is another one of the actor’s gallery of terrific villains, coolly flicking through the pages of a puzzle book as he bargains with people’s lives.

Slant: A competent mid-level craftsman, Joseph Sargent’s serviceable direction steals a page from Sidney Lumet’s early’-70s playbook, the one between Serpico and Dog Day Afternoon, to be precise: Crowded street scenes shot on locations around the city alternate with tense hostage negotiations in the stalled subway car below, pitting cantankerous Transit Authority cop Zachary Garber (Walter Matthau) against Mr. Blue (Robert Shaw), the British mercenary mastermind behind the scheme. Above and beyond its taut dramatic developments, the film’s also a battle of the dialects, with Matthau at his blue-collar Noo Yawkest peppering his palaver with “dese” and “woik,” whereas Shaw’s plummy King’s English connotes aristo authority and suave menace in about equal measures.

Hollywood Reporter: The premise and setting are perfect for the national obsession with disaster. New Yorkers, packed together closer than any other people and living under the constant threat of municipal breakdown, have evolved a defensive, resigned sense of humor that unifies their plight.

The logical pitfall of multiple jeopardy pictures lies not so much in the plotting as in the characterization. The story pretty much takes care of itself, but the description of characters, which must necessarily be brief, can easily fall into stereotypes.

Sargent's accomplishment is in his deft establishment of interesting, full-dimensioned characters, described in a single gesture or line of dialogue, without slowing down the story.

Roger Ebert: When “The Taking of Pelham One Two Three” first appeared as a novel, I avoided it on the reasonable grounds that (a) there was no plausible way to hijack a subway train, and (b) if there was, it would be so obvious it wouldn't be interesting. The movie's plot inclines towards (b). The gang has a good, sound plan, not too complicated, and they almost get away with it. But the movie's appeal -- which is considerable -- doesn't depend on the plan or on the easily foreseeable plot.

It depends instead on a nice feel for New York City and some fine, detailed performances. Walter Matthau is gruff, shaggy and sardonic as a Transit Authority lieutenant; Robert Shaw is clipped and cruel, and the supporting performances are allowed to grow and take on personality. These aren't machine-made genre characters, but individuals (and, more specifically, New Yorkers with gallows humor, paranoia, warmth and resiliency).

This note of unforced realism extends even to the passengers being held hostage. I walked into the theater just as the end titles were rolling up on the previous show, and the credits for the passengers included such standbys as the Deliver Boy, the WASP, the Old Man, the Hooker, the Older Son, the Spanish Woman, the Pimp, the Hippie, the Homosexual, and the Co-eds (numbered Co-ed One and Co-ed Two). Great, I thought this is gonna be another rerun of those World War II movies where the platoon is a cross-section of American racial, social and ethnic stereotypes and everybody does his shtick.

Wrong--the passengers may have been cast according to their stereotyped titles, but in the movie they're just a carful of scared people. They're handled convincingly, and the details of the hijack are worked out in a straightforward, plausible way; the film concentrates on the communications between Walter Matthau, trying to buy time, and Robert Shaw, maintaining credibility. We don't have to endure a series of "Airport"-style vignettes in which a pregnant woman goes into labor, a guitar-playing nun cheers people up, etc.

New York plays itself in The Taking of Pelham One, Two, Three

Comparing the Takings of Pelham 123
posted by MoonOrb (14 comments total) 4 users marked this as a favorite
David Shire's main title theme for this movie just might be the best movie theme ever.
posted by jason_steakums at 8:23 PM on May 31, 2018 [2 favorites]

bookmarked. This is one of those seventies movies I haven't ever watched, along with Dog Day Afternoon, Black Sunday, and The French Connection. Say, there's a couch film festival right there.
posted by mwhybark at 9:02 PM on May 31, 2018 [3 favorites]

Robert Shaw absolutely crushes it in this film.

David Shire's main title theme for this movie just might be the best movie theme ever.

Speaking of "best ever", that poster deserves a closer look.

This may be the first adult thriller that I ever saw; it appeared on TV with, I think, minimal censorship. (No swear words, of course--I still don't know if or how many the uncut movie has--but I do remember the third rail electrocution scene quite clearly, and it came to mind years later when I first rode the Chicago L and eventually the NYC subway itself.) I used to regret not taking a Pelham 123 train while I was living in NYC, only to find out, per Wikipedia, that that was probably impossible at the time. I also skipped the '09 remake--there was something about John Travolta's appearance that I found offputting--but I just found out that there was a '98 TV movie remake with a decent cast.
posted by Halloween Jack at 8:25 AM on June 1, 2018 [1 favorite]

Here's a great essay on The Taking Of Pelham One Two Three from Elliot Kalan (of the new MST3K and The Flop House). Pelham ignores the famous verticality of New York to extoll its horizontal underbelly. Cinematographer Owen Roizman builds the movie around horizontal compositions: tunnels, train cars, gun barrels, rows of desks in low-ceilinged rooms. It’s a horizontal movie to represent a city lying flat on its back. When the city’s famous skyline appears, after 40 minutes of thrilling claustrophobia, it almost feels sarcastic.
posted by showbiz_liz at 10:11 AM on June 1, 2018 [4 favorites]

Much better than the remake. And really, what hasn't Hector Elizondo been in?
posted by rhizome at 7:22 PM on June 1, 2018

The most satisfying closing shot I have ever seen.

Agreed. And that ending only works with Walter Matthau. No other actor on earth would be able to sell it.
posted by MrBadExample at 8:43 PM on June 1, 2018 [3 favorites]

I’ve been trying to see this movie, as I’ce read and enjoyed the book multiple times, but I haven’t wanted to pay for it. Guess I’ll break down and shell out now that it’s on FanFare!
posted by epj at 9:15 PM on June 2, 2018 [1 favorite] 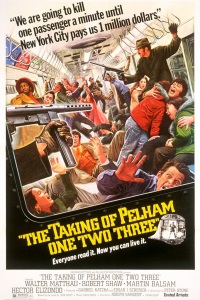