An employee of a corporation with a lucrative secret process is tempted to betray it, in this paranoid neo-noir written and directed by David Mamet. The film stars Campell Scott, Steve Martin, Rebecca Pidgeon, Ricky Jay and Ben Gazzara.

The movie does not take place in Spain and has no prisoners. The title refers to a classic con game. Mamet, whose favorite game is poker, loves films where the characters negotiate a thicket of lies. "The Spanish Prisoner'' resembles Alfred Hitchcock in the way that everything takes place in full view, on sunny beaches and in brightly lit rooms, with attractive people smilingly pulling the rug out from under the hero and revealing the abyss.

We know, far before Ross does, that the game is being played, so part of the pleasure is of the coldest sort: It's watching the tethered goat bleat until the tiger arrives. And he's a very stupid goat: In fact, Joe's stupidity is the incredible aspect of the story, but an absolutely necessary one. Without it, there's no story, just someone saying no to a stupid favor at the very beginning of what will be a long, clever campaign.
posted by chappell, ambrose (9 comments total) 4 users marked this as a favorite
With Ed O'Neill and Felicity Huffman!

I enjoyed this quite a bit. It felt somewhat less mannered than, say, Glengarry Glen Ross.
posted by Chrysostom at 7:36 PM on May 7, 2018 [1 favorite]

Ross is definitely a very stupid goat. I kept getting exasperated with him, wondering if he was ever going to start showing some sense.

Rebecca Pidgeon was really pretty bad in this movie. She dropped all her lines like eggs.
posted by orange swan at 9:15 PM on May 7, 2018

This was sortof like Dirty Rotten Scoundrels without the funny and it felt like there was going to be a theatrical off broadway play profound idea that blows you away sprung at any moment, but no.
posted by sammyo at 4:19 AM on May 8, 2018

This is really peak Mamet. The dialogue is SO mannered and ritualized. And of course that's intentional. Campbell Scott and Steve Martin both do really well with it, managing to find a balance fairly close to naturalism. Ricky Jay always sounds like he's in a David Mamet play, on-screen or off, so he fits right in there. Rebecca Pidgeon probably suffers from the fact that she was being directed by her husband, with his VERY strong opinions on acting and she just did the best she could under those circumstances. Still, she cracks me up, in a lot of her scenes. Her delivery of "My troika was pursued by wolves," and the various repetitions of "I'm the new girl," are especially good. I think, in terms of plotting, this is one of Mamet's better movies, though the big twist where the "process" gets stolen still seems impossible given what we're shown on the screen.
posted by wabbittwax at 6:32 AM on May 8, 2018 [2 favorites]

This was the first movie I’d ever seen Rebecca Pidgeon in, and oh my lord was she wooden. I don’t remember her being quite so bad in State and Main. I fell asleep partway through! Perhaps I should revisit, since I adore Campbell Scott.
posted by hurdy gurdy girl at 11:09 PM on May 9, 2018

Just rewatched this last week with my wife. Does anyone one miss movies that don't talk down to audiences? (Apparently not, because this film's not available to legally stream in the US or in HD resolution at all.)

I like Pidgeon's performance a lot more after re-watching the ferry sequence.
I also remember clearly seeing "Club Membership" at the top of the fancy form in 1997, and still feel cheated—or at least unimpressed—by the film's graceless substitution for that particular bit of misdirection, much like wabbittwax's critique of how the Process was actually filched.
posted by infinitewindow at 3:23 PM on August 29, 2018 [1 favorite] 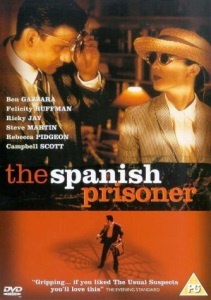