A wealthy San Francisco socialite pursues a potential boyfriend to a small Northern California town that slowly takes a turn for the bizarre when birds of all kinds suddenly begin to attack people.


The Hollywood Reporter: Based on a story by Daphne du Maurier, the Evan Hunter screenplay has for its premise an assault on the human race — or an isolated segment of it — by the birds, our feathered friends. The film starts with a sophisticated flirtation between Rod Taylor and "Tippi" Hedren in the glamor of San Francisco, then shifts to Taylor's Northern California seaside home, a setting of quiet, pastoral beauty, for family complications.

Characters and background are laid in with detail. The Birds up to the halfway mark might easily be a romantic comedy drama. The change comes when birds of all descriptions — principally, it seems, crows and sea gulls — begin to attack in flocks, the humans of the town. In the end the birds rout the humans and Hitchcock's long, last shot (which exhibitors will probably compress) is of the birds in possession.

The Birds: Tippi Hedren in the Green Suit

The Birds' 50 Years of Influencing Filmmakers

The Birds At 50: 9 Moments Of Visual Genius

What Do Birds Symbolize in Alfred Hitchcock's 'Psycho'?

The Day of the Claw: A Synoptic Account of Alfred Hitchcock’s The Birds

My favourite Hitchcock: The Birds
posted by MoonOrb (6 comments total) 4 users marked this as a favorite
I had never seen The Birds for a long time, but of course knew the basic idea, but once I saw it I was so impressed! The slow, slow burn on the birds attacking everyone is so great. It seems like a trick that couldn't work now; the whole thing would be ruined by the trailer.
posted by Elementary Penguin at 8:49 PM on June 6, 2018

Once, when I was a kid (high-school aged), I watched this on vacation with my siblings and some cousins. My sister, who's two years younger and generally skittish, was really freaked out by the movie, so we went outside to get some fresh air, and... a bird fell out of the sky, dead, right at her feet. She has never watched this movie again.
posted by kevinbelt at 10:15 AM on June 7, 2018 [5 favorites]

In conversational lulls, my high school bestie and I would take turns being Tippi Hedren and the woman who loses her grip in the diner after the attack: "Who are you? What are you? Where did you come from? I think you're the cause of all this. I think you're evil. EVIL!"

And then we'd slap each other silly.

And even creepier than I suspected: Risseldy rosseldy, now, now, now

And annoying as all get out. You watch that scene and start rooting for the birds to hurry up and attack the school to shut the singing up.
posted by Thorzdad at 10:59 AM on June 8, 2018

My aunt saw it in the theater when she was too young for it and still to this day freaks out when more than a couple of birds congregate near her person.
posted by potrzebie at 1:06 AM on June 11, 2018 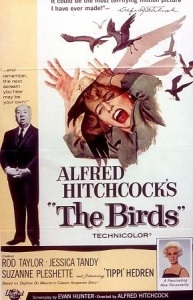